Having ridden two-wheelers of different types & makes for around forty years (I am …years of age and your guess is as good as mine! Let it pass as a personal favour to a junky old timer), In this review have the following to say about TVS Jive motorcycle that I bought some five months ago, a day ahead of my birthday. Needless to say, I am not as young and agile as most of you are, but have always been as much enthusiastic of these machines as you all are. 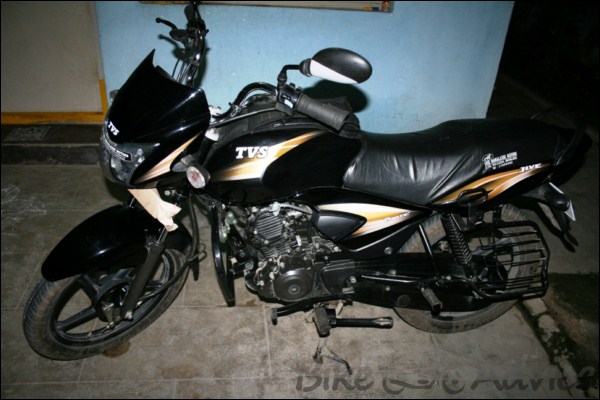 I needed to change my old bike with another good enough one that suited my requisites. While taking a preference I definitely was not swayed by the “Jive – the clutch-less wonder bla…bla…bla…” having witnessed enough of marketing gimmickry these many long years. Neither can one call the Jive a wonder nor is it the first one without a clutch (clutch-lever to be precise), there being a predecessor of a nice little angel, the HH Street gracing our urban streets till a little while ago.

Let’s delve for a few moments on what this Street was. Thereon of course, we can see what Jive is about. Both belong to the same league of 100-110cc segment.

A rather small & compact frame – a crossover of a scooter (step-through) and a motorcycle (foot tapped gears & rear-brake), Street as a city commuter bike was the most convenient one to ride and handle, endowed with a smooth refined engine delivering adequate power & mileage (65kmpl approx) and with cycle parts of the quality one can find on HH bikes alone. Don’t miss out on the fact that it’s only a city commuter bike and a pretty convenient and competent one at that.

Sadly, most of us tend to lose out on clarity when it comes to taking a preference to one over the others, on what we need basically and then, such factors like looks and other adds-on. Like I said, people often are driven by misconceptions and misplaced preferences. I personally feel very sad that the bygone generation failed to appreciate the worth of Street – a cute n sweet city commuter – that was lost for ever.

Thank the Lord or the Stars, whichever you feel like… Here comes the TVS Jive in the avatar of a proper motorcycle packaging. (sans the step-through convenience though!)

I am commuting in my home town Hyderabad on the new Jive for the past four odd months and clocked about four thousand on the Odo. I would like to share my assessment of the bike and my ownership experience thus far.

It is to the credit of the guys at TVS that they came out with a good enough product with all the traits one reasonably expects of a comfortable commuter two-wheeler. What I would say is that Jive overall is a neat and well thought-out & made-out package from TVS. Yes, they did a pretty good job. What they altered from the bikes they sell in places like Indonesia is replacement of the step-through frame to that of a normal motorcycle one. A good looking bike (though not an eye-catcher as such) with all basic paraphernalia plus electric starter at a very competitive price is a real good buy.

With the claimed figures of 8.4bhp & 8.3nm torque apart, you will clearly experience the engine generating superior torque when compared to its peers (except of course, the Honda Twister which I refuse to consider for a commuting bike for reasons of comfort, and safety is also a little suspect on wet surfaces, what with its skinny rear tyre!). The engine purr of Jive is smooth and silent. The bike has good agronomics and the ride comfort is pretty good.

One can expect a fuel efficiency of 60kmpl approx. in city traffic from TVS Jive. You would definitely not find any aspect that can even remotely disqualify it from being called the ideal city commuter bike. The only thing needed is that one has to get used to drive without clutch operation which may take about a day or two, and no matter of concern at all.

I wish that all our bike makers offer commuter bikes with similar or even improved mechanism that would make two-wheeler driving in dense city traffic a whole lot easier! There is another little point contributory to safety in a certain way – engine stalling on that rare occasion when a novice or even a seasoned driver fails to apply the clutch during very sudden braking, or may depress/release the clutch a tad late/early while shifting gears – this aspect is eliminated too.

To all those prospective city commuter-bike buyers who wish to have comfortable hassle-free ride on our crowded roads requiring very frequent gear-shifting and clutch application, I strongly recommend Jive for the sheer convenience and comfort it offers, which I can personally vouch for.

And obviously of course, it is a definite NO to the clan of hot blooded youth brigade, who anyway wouldn’t ever even bother to glance at a non-sporty bike such as Jive.

That’s it for the TVS Jive review. I think that more or less sums up it all!

P.S. Over to our esteemed bike users whose comments are most welcome! 🙂