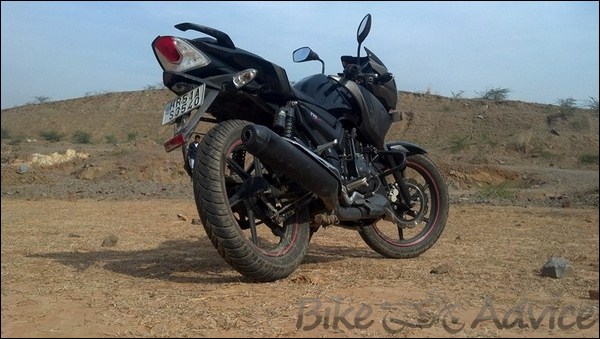 Hi guys, This is Karan from Faridabad. I am a B.tech 2nd year student from Computer Science. This is a review of my bike or more appropriately saying my Soul. TVS Apache RTR 160 Hyper Edge. It is the 2012 model. New Beast. Same Bloodline. For a long time I was looking to review my beast so that it might help someone to buy a bike in this range. As long as you do not find reading about bikes boring, read on. 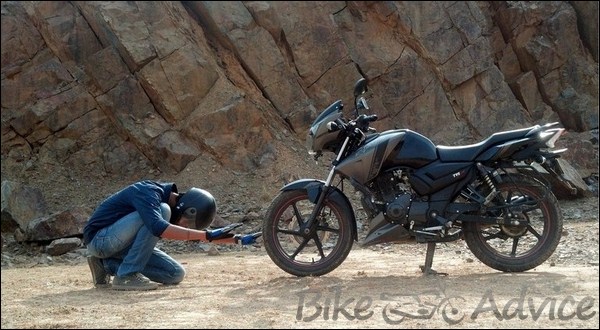 I learnt riding when I was 15 years old. Right from that day bikes felt like they complete me. I kept looking for chances to ride a bike. May it be a friends bike, or a relative’s or my dad’s (had to sneak out for that one). My dad owned a Bajaj CT-100 at that time. That’s the bike I learnt riding on. Just a 100cc bike, but still as it was the starting phase of my riding days, it felt pretty good.

As soon as I got admitted to the college I started bugging my dad to get me a bike. Seeing almost everybody arriving college on bikes made me frustrated. Especially when someone entered the campus on an Apache I felt like Aaaarggghhh! Why I am not riding that bike. Finally when my Dad listened to my mercy pleas, he asked me which one I wanted the only word that came out of my mouth was Apache. 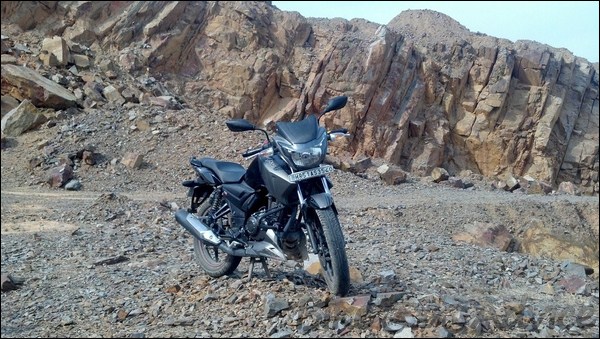 That is because I had ridden my friend’s RTR 180 ABS and my cousin’s RTR 160. Both in there respective categories are one of the best available. The exhaust note, blistering acceleration, light handling in traffic, responsive throttle, just everything about it drove me crazy. 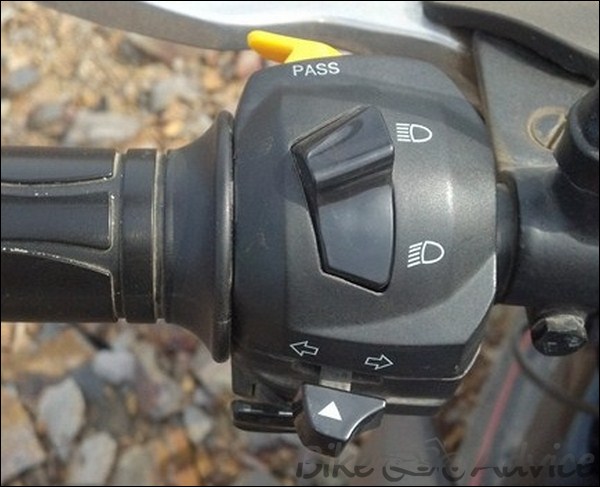 I wanted an RTR 180 but Dad only agreed to get me the 160cc variant. Reason: He thinks its safer because he had seen me riding taking the CT-100 to 93 km\h. He also got emphasized on the rear drum variant. Reason: Misconception of people that discs are unsafe.

So finally I got the bike booked on 6 July and got it delivered on the same day. Run-in was like Dark Age for me. A bike this eager to burst out of control to be driven under 60 km\h. But still I held on my nerves and followed the speed limit. I took out an hour or two everyday to do the Run-In. There’s an open road in my way to college that’s where I used to ride it. Accelerated slowly to 60 km\h, the back to zero without using the brakes (Using engine braking as much as possible). 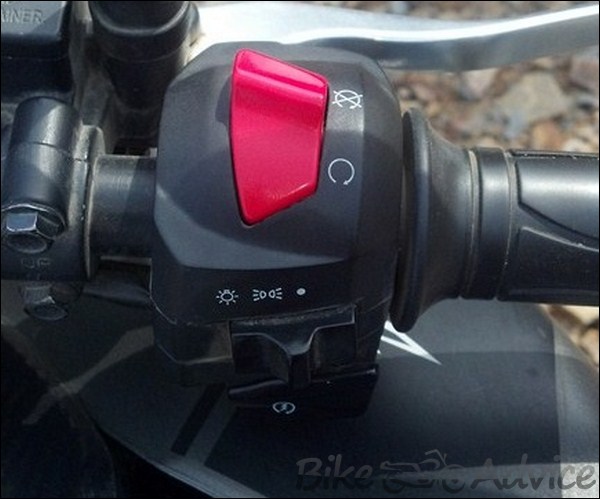 This helped me complete the run-in quickly. Then first service at 500 kilometers just in a 9 days. The service was as expected from the Indian companies? No it was pretty good as the mechanic was paying good attention to the bike and the supervisor too gave me a good treatment. Air filter – change, engine oil change, chain lubed and bike inspected for any abnormalities. I too encountered no problems in the bike.

After the first service the bike felt even more smoother. Right after I crossed the 750 kilometer mark I ripped the throttle open right up to 106 km\h. The experience: It was Majestic. It could have gone higher but I had to slow down because of the traffic. Right now the ODO shows 7948 kilometers. This was the prologue now the observations and review. 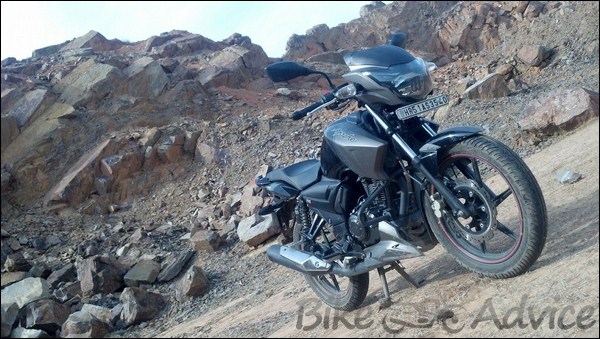 I am not going to bore you with the technical specifications of the bike as you can find the detailed information anywhere, or just Google them. In the 2012 version too the engine remains the same Air – Cooled 159.7 cc four – stroke, Twin valve mono cylinder unit producing 15.2 Bhp @ 8500 rpm and 13.1 nm of torque @ 600 rpm. The motor is Short – Stroke i.e. The revs climb very quickly. This provides the bike with monstrous acceleration. 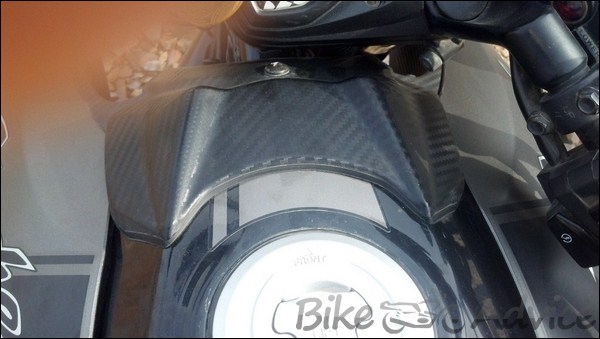 The main changes in the 2012 version are visual. The headlights have a black treatment inside that looks aggressive. Also the beastly DRL’s (Daytime Running LED lamps) add to the aggression. The engine and tank cowl are now bigger and are said to be more aerodynamic. The HUD, the tank, side panels and some part of the side panels have faux carbon inserts. The Carbon panel on the tank have rubber pads below them to damp the rattling of those panels. 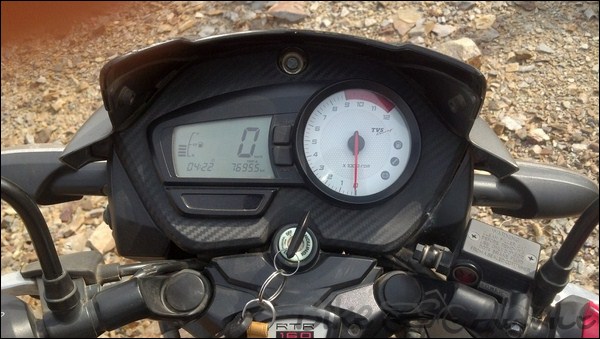 The digital – analog combo meter and the dual texture seat are transferred straight from the RTR 180 ABS. The digital meter is now blue backlit and looks way better than the orange one. The rear panels too are stretched to make the bike look more chiseled. 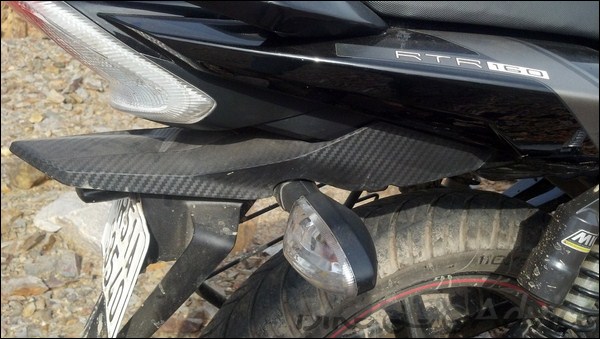 The buttons on the console are also new and are shaped aggressively. Also the rear tire on the Hyper Edge is now of 110 section. The saree – guard and crash guard designs have also been changed. The colors available are Red, Green, Yellow and Black. I chose the Black one as I am a die hard Batman fan.

My personal opinion , It is The Menace on road. Looks macho even, sounds so. Aggressive styling, DRL pilot lamps give it a distinct feel on the road. Kids on the streets when look up to the bike sigh in amazement. 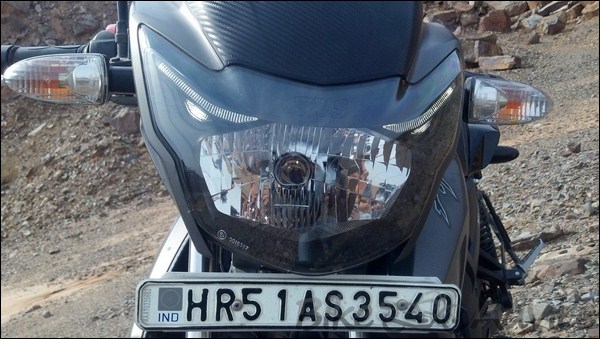 The fatter rear tire adds more to the personality of the bike. The new sticker job also looks cool. I also had a carbon fibre sticker added to the visor so that it matches with the carbon panels on the bike and It does look good. 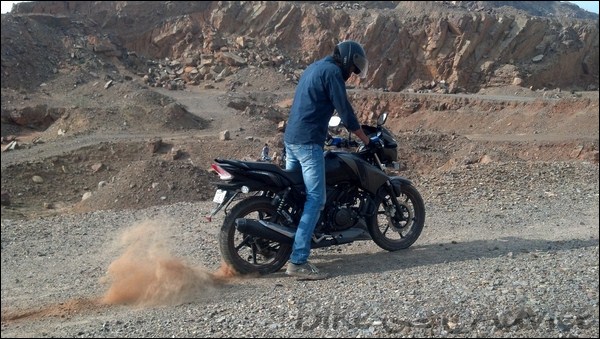 When you buy an Apache you do so because it performs. It provides the rider with a unique experience. It is good enough to thrill even the professional riders. 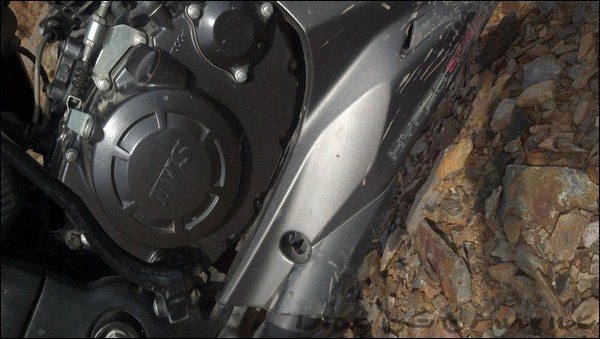 The short – stroke motor delivers without compromise, the Pinnacle of performance for a bike of this capacity. I did the 0-60 run in just 4.5 seconds (also added a picture of it) and a top speed of 119 km\h on a day with heavy crosswind. In traffic it is a boon. 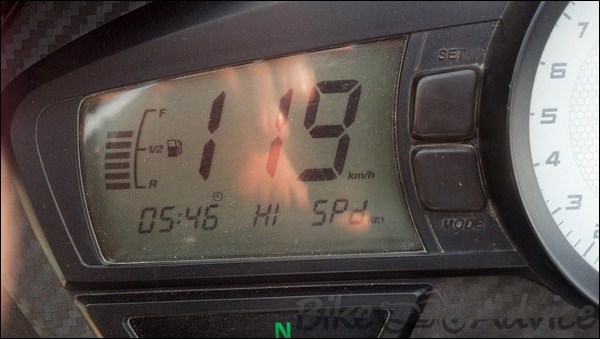 The responsive throttle and agile steering make it cut through the traffic like a hot razor through butter (that’s s bit over exaggerated but I am over exaggerated). On open roads just rip he throttle open and keep it going till you hit the redline of the top gear.

The fatter rear tire has made the more stable at speeds and at corners as compared to the older model of the RTR 160. The suspension (Telescopic fronts and Gas Filled Rears) are a bit on the softer side. So It isn’t a cornering expert like the R15 but still satisfactory on the corners when a knee is dragged. But these softer suspensions also have a plus point that they are more efficient in tackling Indian roads. 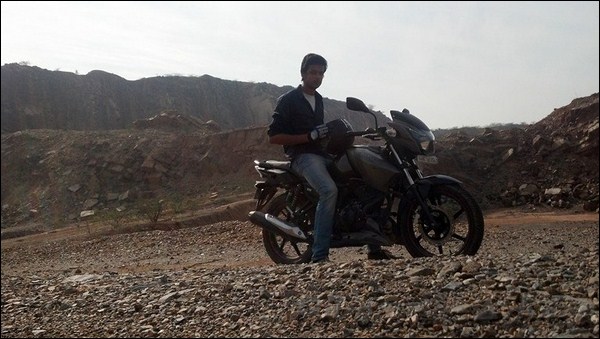 The ground clearance has been reduced but it still is good enough to tackle speed breakers and potholes. The scenario changes completely in traffic. According to me it’s the best in business. The brakes (Roto – Petals in front and Drums in rear) are good enough however the variants with rear discs are better.

The low seat, rear set foot pegs and low seat provide the rider with an aggressive riding position that looks good and suits the bike. But on the downside though, long runs may require a rest as it develops a slight backache and wrist pain. It takes some time getting used to it but after sometime it settles in.

It gives me a decent mileage of 45-48 km\l in mixed riding conditions i.e. mixture of city and highway riding. I usually keep the speeds around 65-70 km\h until provoked. When somebody needs to be reminded of his position against my beast, I redline it to the moon and keep it coming until either I get scared or the bike goes out of breath (this happened only once). So the mileage figure is pretty good for a bike of this capacity.

Nothing is perfect and it implies here too. Here’s the list of drawbacks I came up with:

These were the drawbacks. According to me the older Apache looked better than the current one except for the Pilot lamps. Also mono-shocks could have improved the handling and cornering and make it more stable round the corners. Even after the drawbacks it still is my babe and I love it. 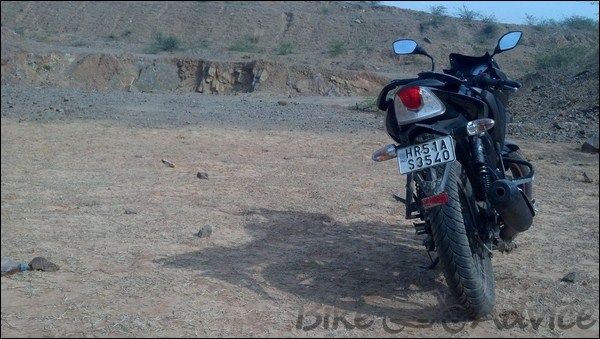 It makes me ecstatic when I ride it. It makes my day when I look at it. Rewards me the best riding experience I’ve had until now. In the ~8000 kilometers it has become a part of me. My verdict is If you are looking for a commuter don’t get it as it may not fulfil your high mileage or good comfort needs. But if you want a bike that is loud, provocative, aggressive and has a Badass character like Kratos from God of War get the Apache without any second thoughts.