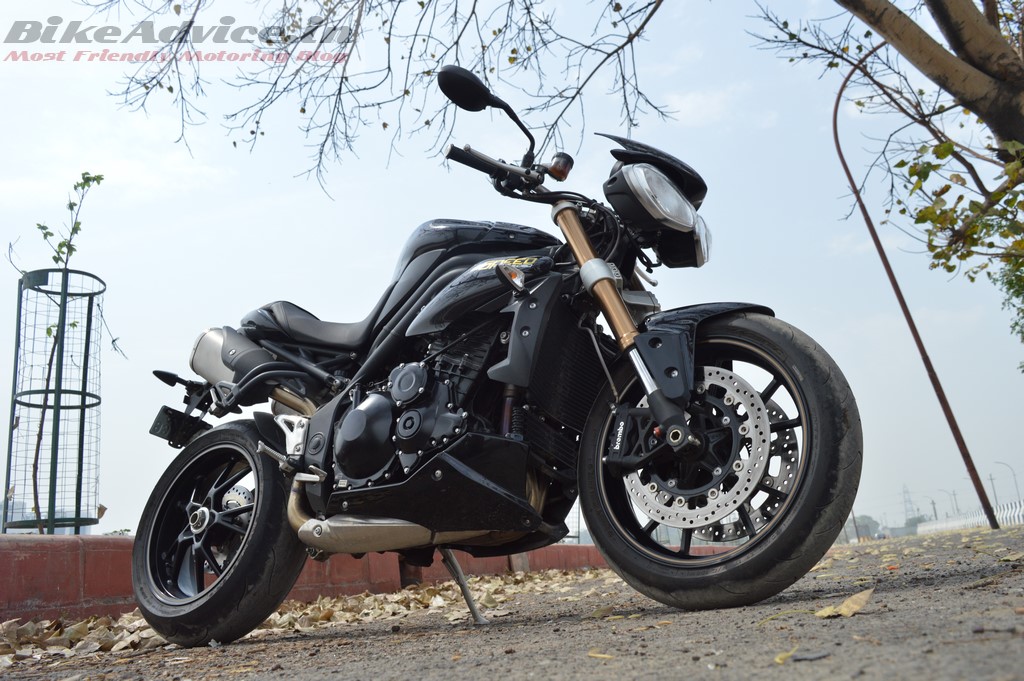 If you ask someone to name the greatest invention of mankind, they’ll probably say, “the wheel”. And they would be right. However, if they happen to be bike guys, they would quickly add, “‘an engine between two wheels’, was even better”. And they would be right again too. You see, the wheel wouldn’t have gone anywhere on its own… Besides, in all its hundreds of years of existence, losing some bulk and getting a bit stronger is all it has achieved in terms of development. Heck, it still hasn’t managed to work on its shape, and we all know it would not be able to come out of its vicious ‘circle’. Plus, it would always be wearing rubber…

In striking contrast, the internal combustion engine has done astoundingly good for itself, in just what can be termed as an hour in comparison. From the first one-horsepower engine, a little over a hundred years ago, to the latest 1200 bhp W16, the engine has indeed come a long way. And it’s not a different story with the bikes too. The first one apparently produced less than even one bhp and had a top speed of 12 km/h. Now, the latest (and the best) MotoGP machines produce around 250 bhp and can clock more than 350 km/h. Even the streetbikes are now producing around 200 bhp! Which also tells me that this might just be the last of the most glorious periods of motorcycling ever. After this, it might all go downhill when your home appliances and motorcycle start sharing the same factory stamp… 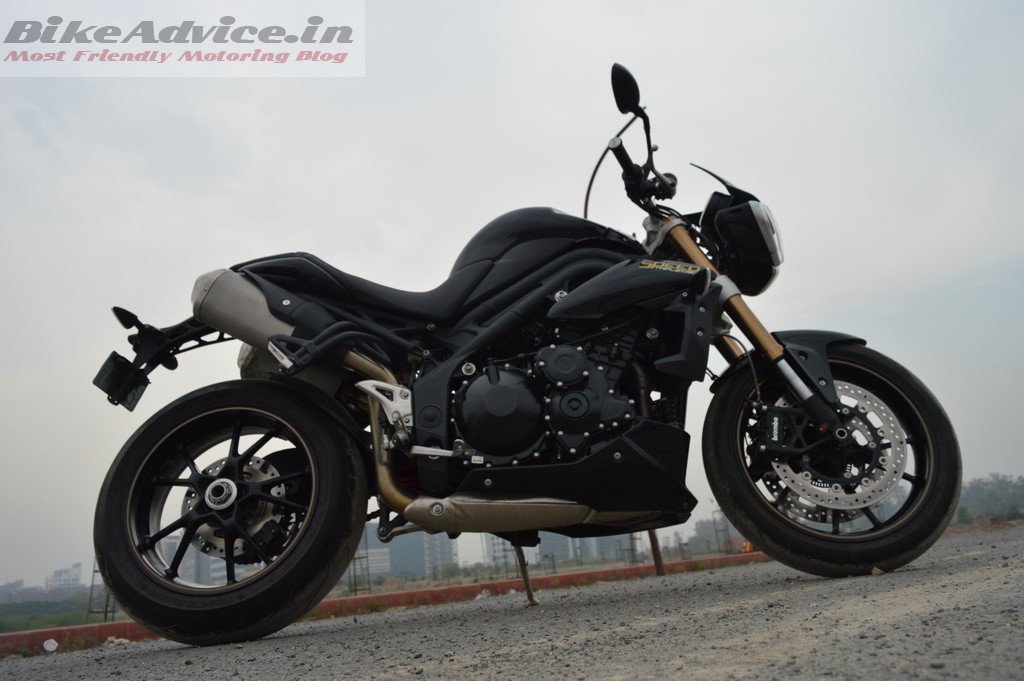 But that’s some time away and, thankfully, we still have motorcycles like this one, the Triumph Speed Triple, which makes you forget thinking about the uncertainties of the future, and just ride. Not only that, with the tacho needle past the 4k mark, your adrenal glands working overtime, you also end up forgetting the bitter memories of the past, and even the sour experiences of the present. Yes, this bike will help you get over that breakup sooner than any counselling, therapy, or alcohol would (or would not) do it for you. Of course, this bike is not only for those who have seen hard times, but even those who were born with a silver spoon in their mouth may buy it to increase their happiness quotient exponentially. But please check if you do have big cojones, first; that’s a prerequisite to ride this one… More on that, a little later. 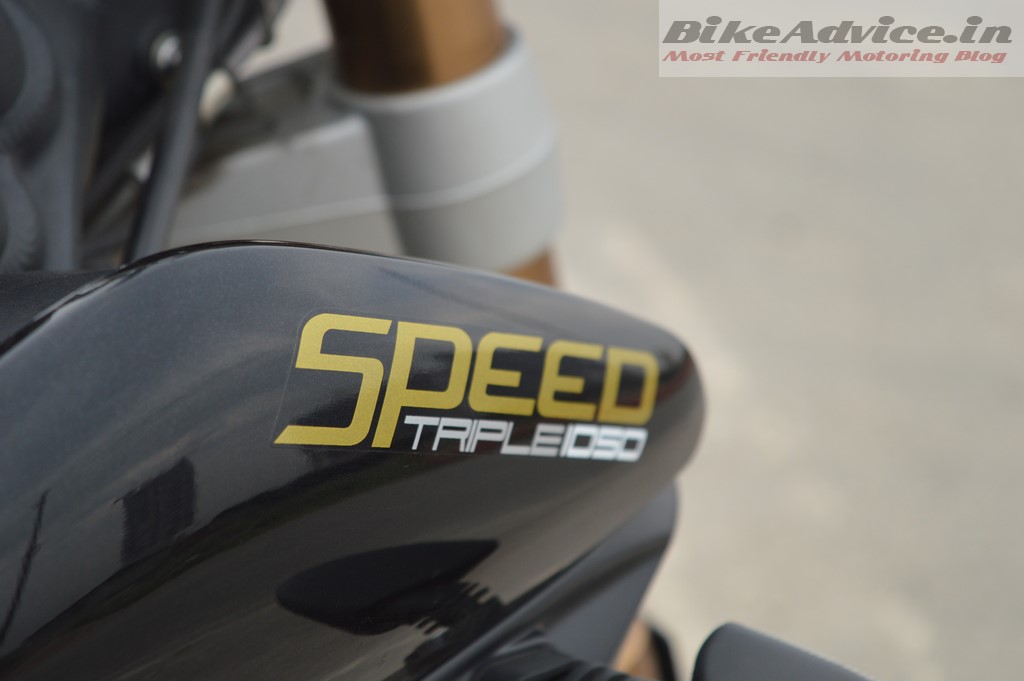 Looking at the pictures of the Speed Triple, before I saw one in flesh and metal, I perceived it as a big, intimidating motorcycle for my five-foot-something frame. Thankfully, it wasn’t, other than the seat height, which, at 825 mm, is not only quite high for someone like me, but also for anyone who is shorter than 5’6″. To put things into perspective, the Yamaha YZF-R15’s saddle height is 800 mm; the Ninja 1000’s was 820 mm, and the YZF-R3’s stands at 780 mm (the lowest seat height of any sportbike in India, perhaps) off the ground. Still, if I managed, so can you if you really like this bike, and do not have a disproportionately smaller inseam. 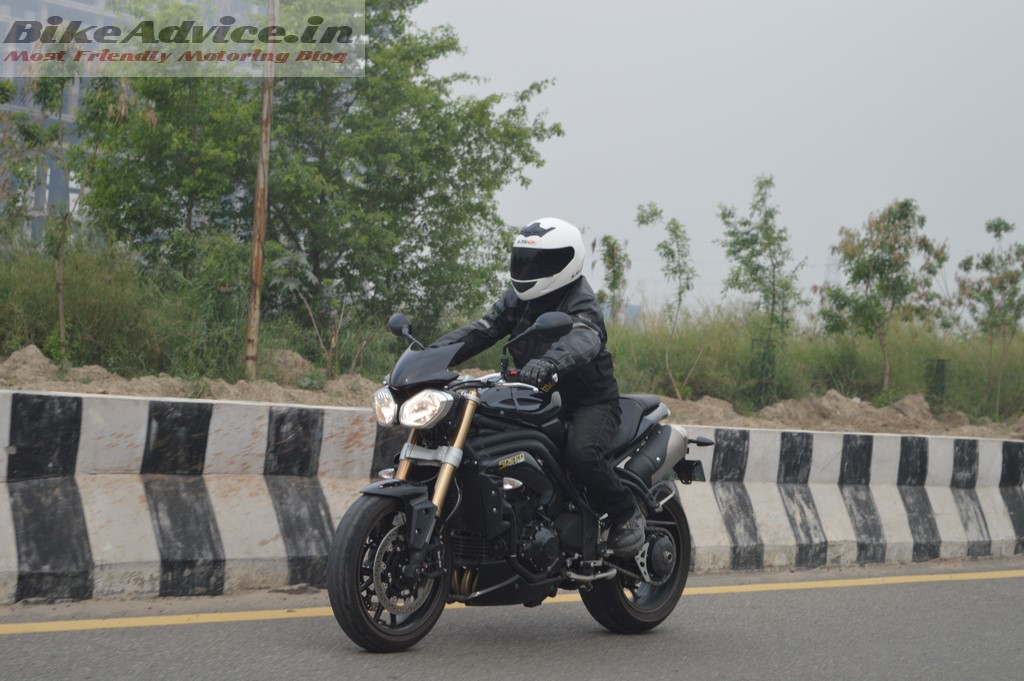 Now, as usual, I won’t talk about the design of the bike, because it is subjective. You have the pictures in front of you, so judge it for yourself. However, I shall certainly tell you whether I like it or not. 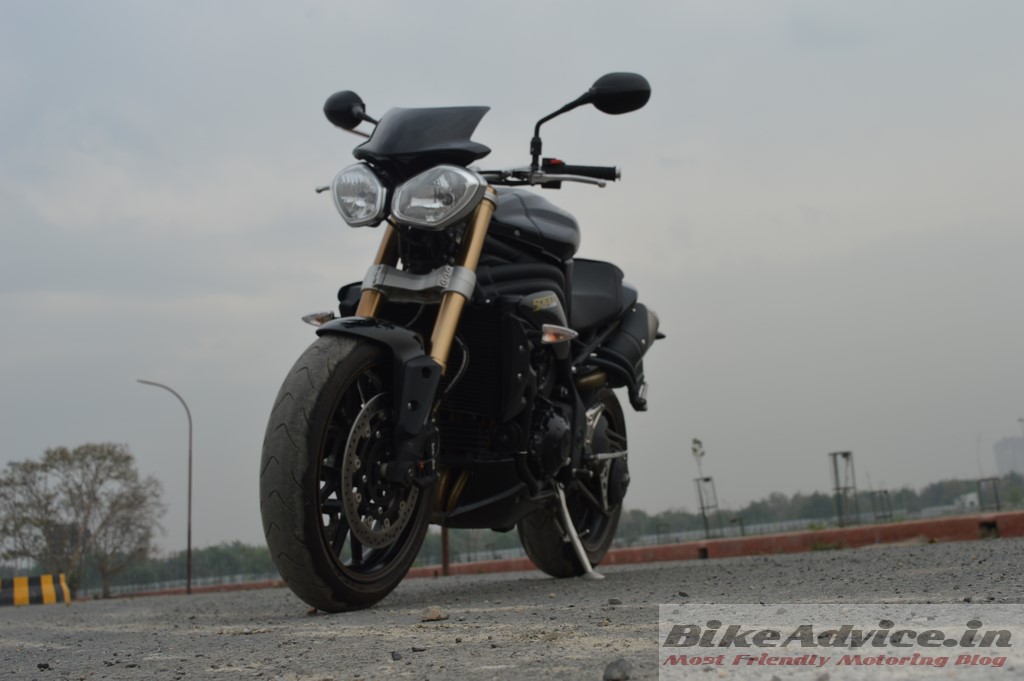 I’d call it a MUSCLE BIKE. Something that won’t look out of place standing next to an AC Cobra. I have actually been a fan of the bike ever since I first saw it a decade and a half ago, like many others, in Mission Impossible 2. So I’d still take the simple round headlamps of Ethan Hunt’s bike over the intrigued-looking units on the current one. While at it, I would also remove the fly screen, its minuscule wind-deflecting efforts notwithstanding, to give it a clean, uncluttered look. 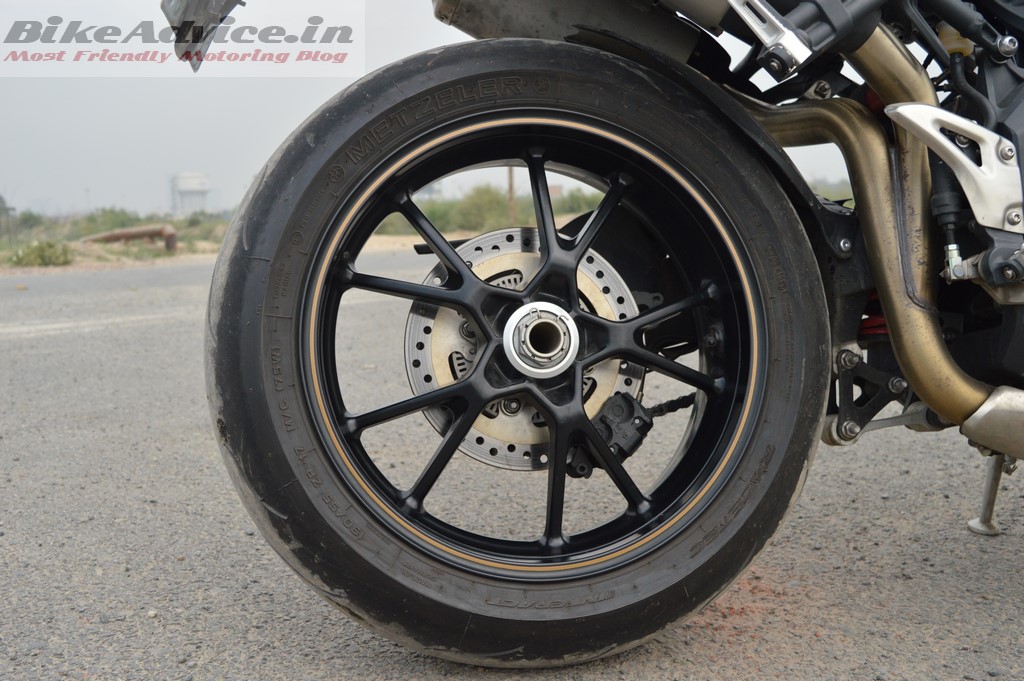 I like the fact that the chunky Metzeler at the rear, and the 10-spoke alloy wheel wearing it, is always on full display, thanks to the single-sided swingarm — a design feature that will also help you distinguish the Speed Triple from its smaller-engined sibling, the Street Triple, as the latter hasn’t been blessed with it. 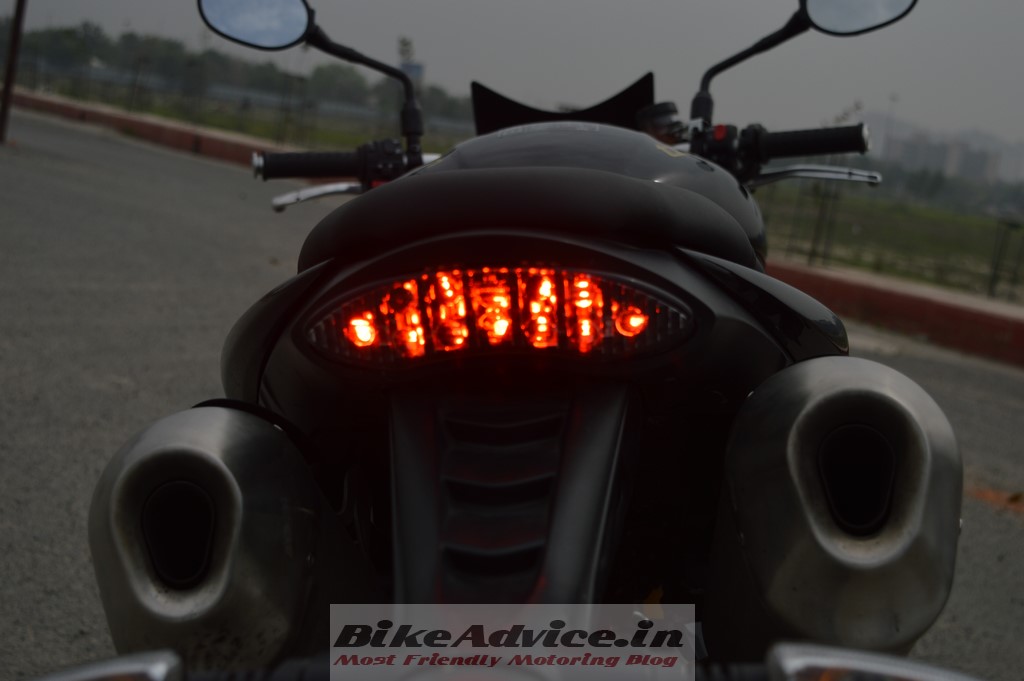 But, I have a love-hate opinion when it comes to the two underseat exhausts. On the one hand, I love it as their size and placement makes me think of a powerful yet modest buddy, who is trying to hide his muscles, but they are so huge that they jut out of his shirt’s half-sleeves anyway. On the other hand, I hate them as I believe that a simple round canister on the side would not only look better but would also free up the space between the tail and the rear tyre making the rear-end look less stubby. Opting for a side exhaust should also make it more comfortable for the pillion too (if you’re into that sort of riding). All said and done, I feel that Triumph would be doing a favour to the Speed, by taking some weight off it, at least visually. 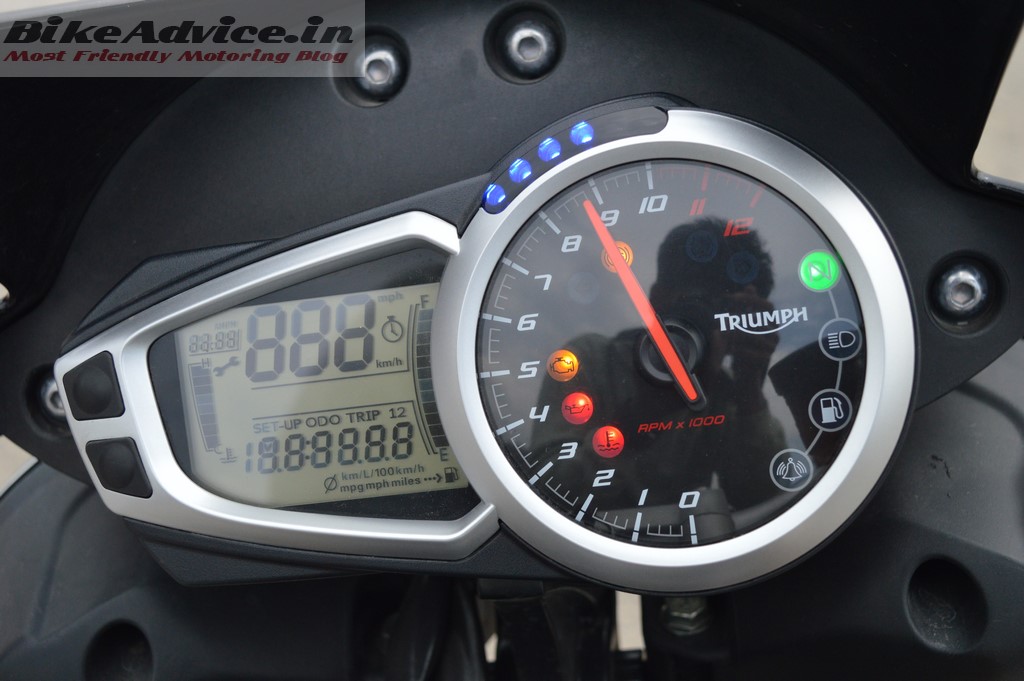 After taking it all in via the eyes, it’s time now to ride this naked. Switch the ignition on and the six blue shift-lights, which rest on the circumference of the analogue rev counter, light up while the needle does the customary sweep. Those shift lights are programmable, but I didn’t bother. You won’t be looking down at it much if you ride the Speed Triple the way it’s supposed to be ridden… 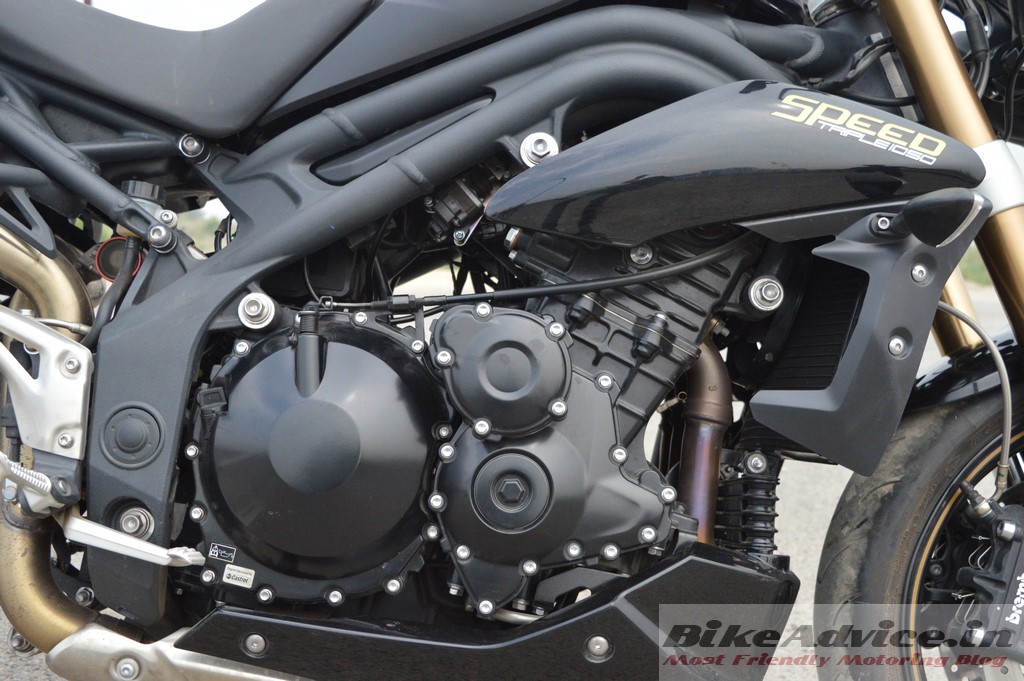 Thumb the starter and the 1,050 cc inline triple engine growls to life and settles into a bassy idle. Silent enough to not cause you to hesitate from starting it at 3 am, but bassy enough to always remind you to give it respect. And respect it, you shall. Because it is as old school as it can get, though tastefully and without compromising on the quality and smoothness that we have come to expect from new age sportbikes. So yes, the build quality is impeccable and nothing on the bike feels that it would drop off on the go. And the fueling is perfect too; the bike is beautifully easy to ride slow, say, up until 3,000 rpm, post which the amount of throttle input becomes directly proportional to the size of your aforementioned family jewels…

Because from around 4,000 rpm onwards, the Speed Triple just explodes into the horizon with the front wheel leaving the tarmac even before the tacho needle touches the redline, forcing you to upshift every time for controllable progress. There’s no traction control or different power modes on this one; that’s what your right wrist is for! Thank you Triumph, as this is really how a ROAD SPORTBIKE SHOULD BE — easy to ride slow, but needing nothing less than full commitment to ride fast. I love it! 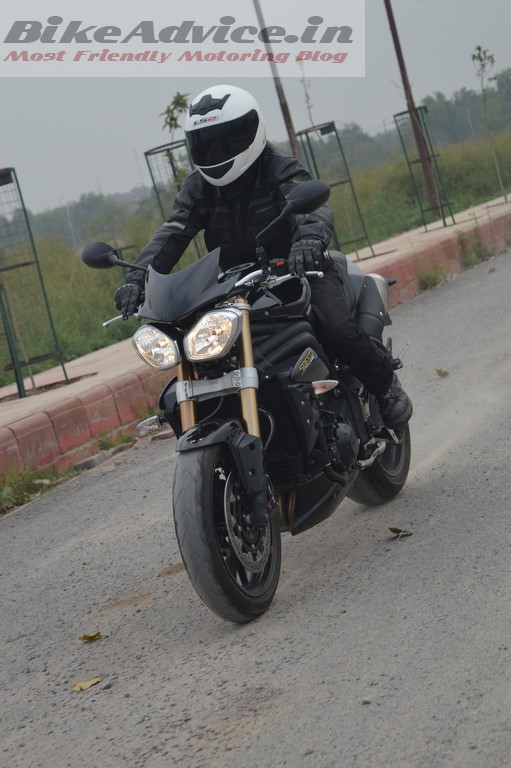 I would like to add here that any fool can wring the throttle to the max on a bike loaded with electronic wizardry, only to shit his pants when faced with a tricky situation at high speeds. Alternatively, a bike like the Speed Triple will let you trundle around on it calmly, but will scare you beyond wits if you’re even a little careless with that throttle. And that fear, dear biker, will not only make you realize the power of the lethal weapon at your disposal, but will also enlighten you of your own ability (or the lack of it) as a rider. That’s something which always brings about a better rider in time.

Oh, talking about time, in a different dimension though, Triumph claims that the Speed Triple does the 0-100 km/h sprint in 3.3 seconds. Even that blistering time now sounds a bit conservative to me because I noticed (in one of the videos I did for a friend’s blog, on the Speed, recently as well) that I went from from 13 km/h to 101 km/h in second gear in exactly three seconds, and this was when I was just having fun! I have this feeling that it’s capable of posting an even better 0-100 km/h time than the company claimed figure… Shall try to check that for you guys next time. 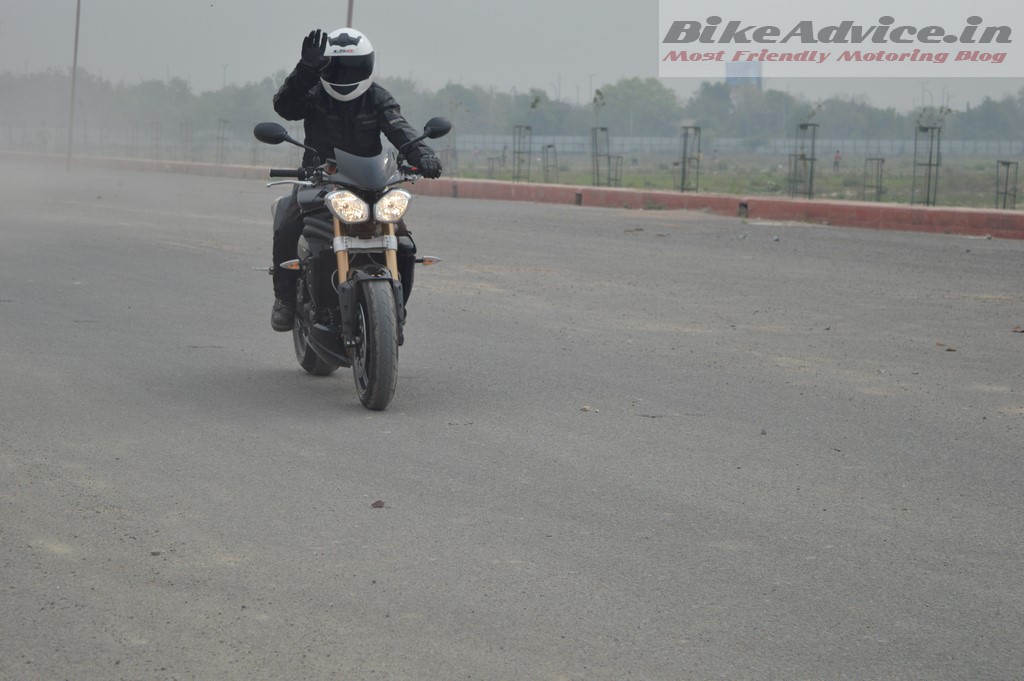 You must be thinking right now that okay, all that power rush is great, but does it handle? The answer is a triumphant YES, it does handle bloody well. I was expecting it to feel quite reluctant in changing directions, but it did prove me wrong and how! The one piece handlebar provides excellent leverage and you can dart in and out of traffic gaps without a second thought. The thing is so fantastically agile that, despite that huge tank, you feel like you’re riding a beefed-up 400 rather than a litre-class machine! Moreover, it’s extremely planted in a straight line too; of course, provided you can keep that front wheel down! 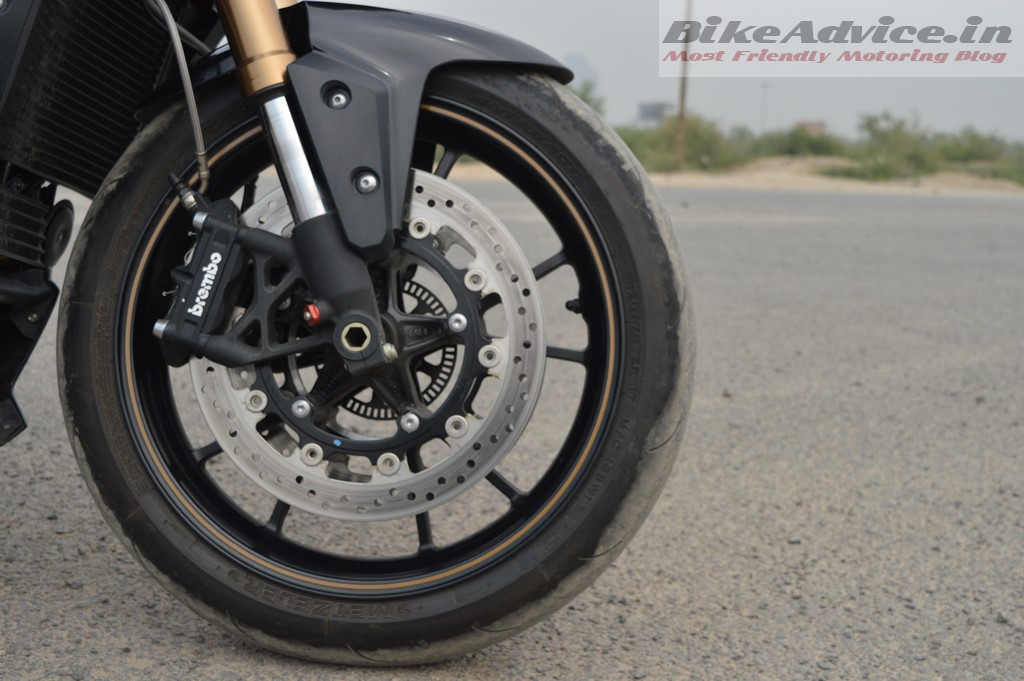 And those brakes are phenomenal, to say the least. The feel and bite at both ends is great and even the ABS does not butt in like a mannerless reality show judge, unless called for. Of course, those sticky Metzelers are equally responsible for letting the brakes do their job effectively, while also providing amazing levels of grip on dry tarmac. I didn’t get an opportunity to test the grip on wet roads; in fact, this, and the effectiveness of headlamps would be two things that I couldn’t test in the time I had the bike with me. But I shall, sooner or later, whenever I get a go on it again. 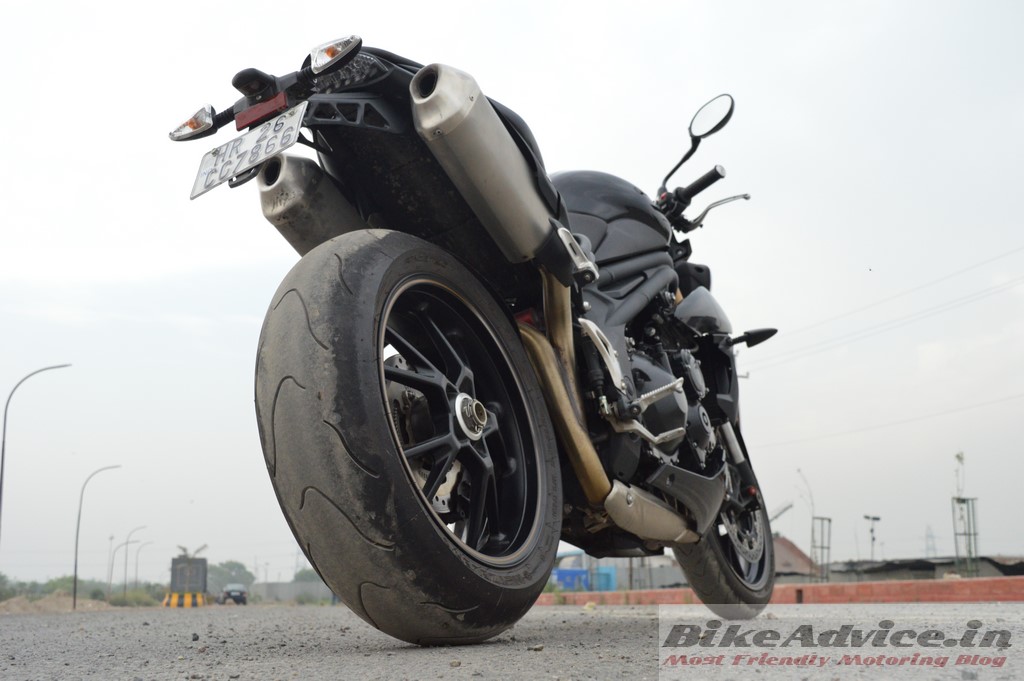 The ride quality, is on the firmer side (it has to be) but not bone-jarringly so. The front and rear suspension are both adjustable for rebound and compression, so I’m sure everyone would be able to set the damping to suit their tastes. I didn’t touch it, as I found the suspension tune to be in sync with my preference. The Speed Triple is one of those few superbikes on which you won’t have to slow down much upon seeing a rough patch on the road. It dismisses such stretches with aplomb, but without breaking the rider’s wrists or rearranging his innards in the process. Again, to put things into perspective, let’s say that the the ride and seat comfort on the Speed Triple is four to five times better, if not more, than on the KTM 390. Also, like the little Austrian, and unlike the faired superbikes, you can immediately and easily stand on the pegs and sail through the rough stuff, thanks to the fairly upright seating position on offer. 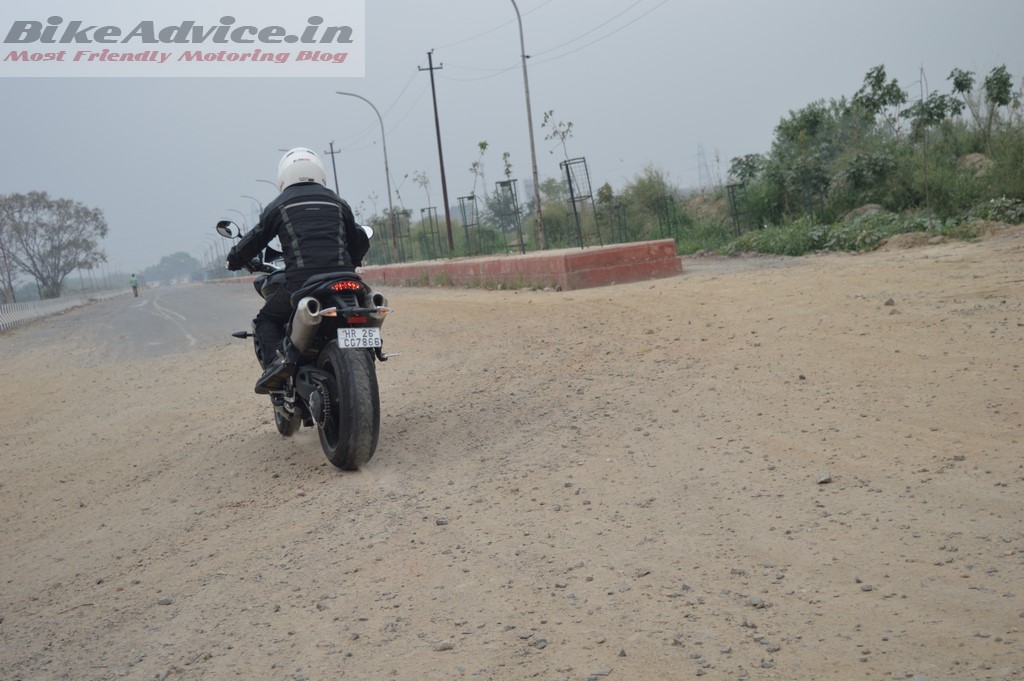 I am sure you would have noticed by now that I have refrained from telling you the numbers of all sorts, save for the 0-100 km/h time and the seat height, in this review. Okay, I’ll give you one more — 12.5 km/l (in city), which means you will cover at least a little more than 200 km on a tankful before needing a refill.

Coming back to the point of not cramming this review with numbers, I would give you two honest reasons for it: a) you may check those on Triumph’s website anyway, and b) the Speed Triple is a motorcycle that is beyond such rudimentary yardsticks, period. This soulful machine is from that rare breed of motorcycles that, thankfully, still uninhibitedly embody “motorcycling” in its purest (read “raw and ballsy”) form. Go buy one before they stop making them like that…

Liked the review? Wanna check out more..? Head to our Bike Reviews Page