Torque the word itself suggest power from core. Earlier we had large number of two stroke engines in Indian market. These engines were known for it’s true nature – Power. Well let’s not talk about details about it’s Engineering. Lets talk about some of the spare which was helping to increase the engine torque.

Reed Valve, the main spare of two stroke engine which was contributing it’s help to increase the torque. This spare was also known as a NRV (Non-Return Valve), which was closing the door of intake manifold from inner side when piston used to start towards BTDC. That means keeping the charged Air/Fuel Mixture in the crank and pressurised it. Now in this case torque used to get high due to perfect quantity of AF (Air/Fuel) mixture. 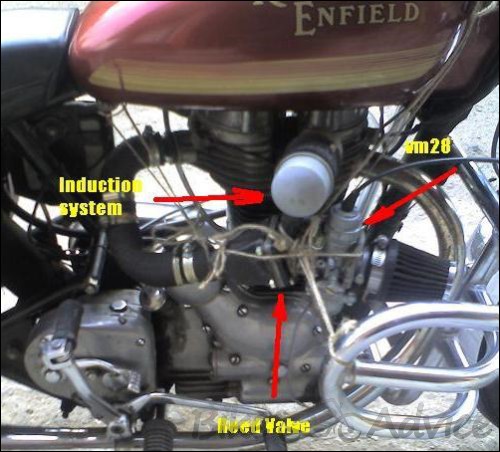 As per my experience when I did this engineering I found the bike stopped backfiring, back kicking, smell of fuel and good power. I used the same concept of Reed Valve. After some engineering I did put on reed valve when piston used to travel from BTDC to TDC the Reed Valve gets closed and keeps the charge AF in the chamber due to that I found great change in power.

Though the fixing of the carburetor with reed valve was temporarily, it was just for testing purpose. But the result was great. Basically, in two stroke engine reed valve acts when piston is coming towards BTDC, but here in four stroke engine it acts when the piston is coming to TDC position. When piston comes from BTDC to TDC in that case Valve never get fully closed so due to that piston somehow reverse the main AF to inlet manifold or till the air filter. But after Reed Valve it stopped reversing the AF till Carburetor. That means fully charged AF for burning and torque.