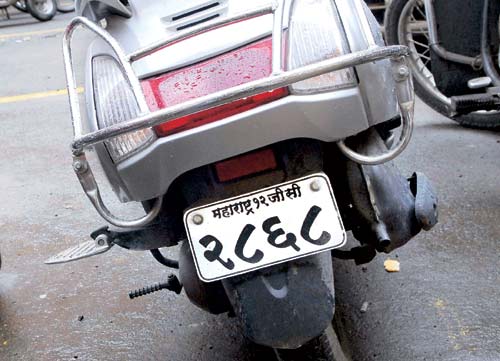 Maharashtra’s State Transport minister, Mr Diwakar Raote wants number plates of the state-run vehicles in Marathi language. To carry this forward, he recently met the Union transport Minister, Mr Nitin Gadkari requesting him to grant the permission according to a report on Hindustan Times. The state minister adds that Mr Gadkari has accepted his demand. Reportedly he (Gadkari) has also directed the transport ministry officials to initiate the process.

So let me break this down for you. If this ruling goes through, all the auto rickshaws, taxis, cabs, buses and trucks, which ply inside Maharashtra, will carry a number plate in Marathi. Private vehicles though will have it as an option to either carry the number plate in Marathi or the more universally-understood English language.

So for instance, if you are a non-local visiting Pune for the first time for a short business trip and unfortunately on your evening stroll some local cab guy hits you and tries to flee away, imagine deciphering his number plate under that condition (if you remain alive and conscious that is) just to inform the police guys about the culprit!

Diwakar had earlier tried to get a similar move passed back in the late 90s when his political party was in power in the state. Recently he was back in the news when he brought the ‘No helmet, No petrol’ initiative in Maharashtra.

So frankly, we could not understand this – while in power why don’t you focus on building new roads, maintaining the current ones, enforcing traffic rules, ensuring these rules make sense, inducting order, providing the most basic facilities etc. I am sure this is a lot of work and there must be no time to consider things as baseless as the language of the number plate!

So, this is where we are heading! What are your views on this demand?