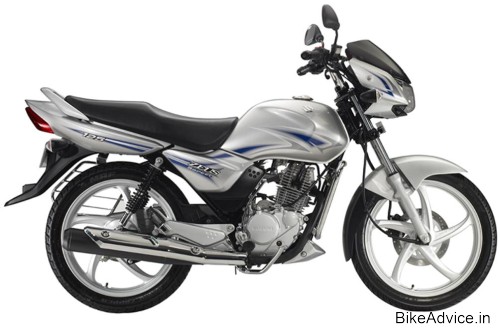 Suzuki Zeus no doubt has become a very popular choice of biking and motoring on Indian roads for people of all ages. Be it style or performance one cannot simply beat its characteristics and colors of sparklingly flame red, the bedazzling gold and the midnight pitch black. Noteworthy is the fact that in spite of being a later entrant into the two wheeler segment after Honda, Suzuki nevertheless became a key player in the Indian motorcycle industry. However, in the battle of Hondas and Suzukis, the best thing is that the benefit spills over to the Indian bikers in the form of more improvisations and add-on features for the same priced motorbikes; so one can expect advanced features coupled with the latest technology.

Looks: Crafted for city commuters, this entry of Japanese giant in the Indian roads, in the form of Suzuki Zeus has marked an era of a new beginning. Zeus has the most stylish looks with its bikini cut and front cowl appearance. The dynamic look and shine of Suzuki Zeus is any onlooker’s craving to possess one for own ride. On a ramp of Bike fashion shows, Suzuki Zeus will undoubtedly dominate with its beauty and sleek design. It is the V-shaped multi-reflector headlamp and the stylish muffler that further add to its appeal apart from imparting better visibility.

Performance: Equipped with a single cylinder, 125 cc four strokes robust aluminium engine of Suzuki Zeus has unique cooling facilities. The kick start of this bike requires simply no effort primarily for its auto decompression system. Suzuki Zeus generates a peak power of 8.7 bhp at 7000 rpm. The maximum torque is 10 Nm at 3500 rpm. Zeus is one of the few bikes that do not have a constant velocity carburetor and its torque drives an overall better performance. The benefit of Zeus does not end here, as it has the maximum fuel efficiency with shift indicator and advanced gearbox for a great smooth ride.

Final Verdict: A comfortable ride on Suzuki Zeus is enhanced with its ergonomic seat with greater capacity, easy access to ground with minimum knee bending and even has an additional feature of a helmet holder adding to its benefit. Has a large fuel tank, thus minimizing the need to fill it at frequent intervals and is equipped with powerful disc brakes with bigger drum and bright halogen headlight as a safety measure, thus making the bike more marketable.

Apart from its exclusive benefit, Zeus simply misses out on some crucial features such as electric start, thicker rear type and better swing arm for greater stability. Nevertheless, its added benefits far outweigh these little specifications, so no wonder it rides on the street with its unique style and appeal.