The Suzuki Zeus was the first motorcycle of Suzuki India that was launched in their comeback process to India after almost 5years they broke their trust with TVS. It was showcased first along with Suzuki Heat on 11th Jan at the Delhi Auto Expo 2006. But what took customers by surprise was that both the motorcycles had the same 125cc engine and was on the offering simultaneously. 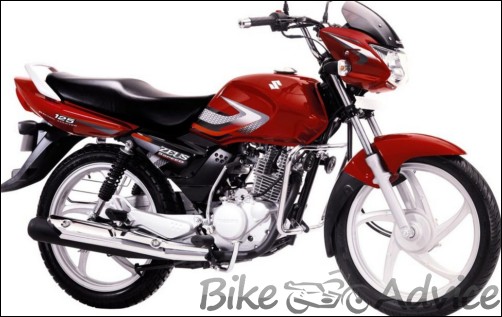 Though the looks and styling of both the bikes differed but the engine, transmission and every other technical detail remained same for both the bikes. For Suzuki, it was more of like selling same flavors in different cones.

It took some time for the company to realize that they went for the wrong tactics and soon Heat disappeared from the scene almost as quickly as it arrived. And for the Zeus, it managed to keep some customers happy and stay here at last for the time being.

The Bike: The motorcycle may strike a chord in your heart with its elegant, charm and compact looks. Suzuki has desperately tried to bring the best of both worlds, Style and Mileage, so power has been neglected. Even its tagline says so- “More Style. Great Performance.” The 124cc 4stroke Engine produces a disappointing 8.7bhp giving you enough reasons to dump this bike and go for others in the same segment. Add to that a pickup that isn’t that quick 0-60kmph in 7.3secs. It has a top speed of about 98kmph.

Riding: With a wheelbase of 1240mm and 155mm ground clearance, you can ride it out with much comfort even though the bike doesn’t feature gas shock absorbers. The seats are quite ergonomic and offer large seating space. The brake shoes are Asbestos free which means only the best material available gets on to the bikes braking system. Tachometer is also provided on the instrument panel. Sporty cowl, Exciting body graphics, helmet holder, wider rear view mirrors and pass light flasher just goes on to improve the riding experience. The chrome plated bar end weights are provided to arrest vibration. 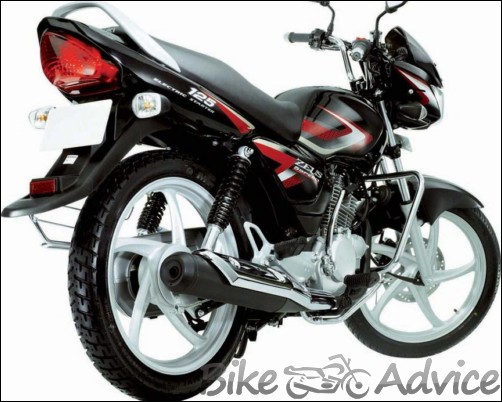 The fuel Tank capacity is 12 liters with 2.1 liters in reserve. This also ensures a wide popularity in the rural market where it is tough to frequently fill fuel due to paucity of many petrol stations. Styling: Sleek, modern and dynamic seems to be the theme for is styling. The engine is all aluminum and painted black. The silencers are sleek yet stylish and the turn indicators have clear lens on them. Other features on this bike includes a quality chrome polish with engine guard, bright multi reflector Halogen headlamp, one side handlebar lock, primary kick and Decompression system and bigger drum brakes. But one feature that you’ll surely love is its 5Spped gearbox (1 down 4up style) along with a unique gear shift indicator. Not to mention the bike also features Black alloy wheels which looks stunning on the all black version of the motorcycle.

Though it may disappoint you in terms of output of power, but a little closer thought on this and people who care more about mileage will find it relatively easier to own. Thanks to the XTP (Extra Torque Performance) technology, the bike delivers 66kmpl on highways and 72kmpl on city roads. The XTP also ensures a good level of low end torque even with a pillion rider, say there is no knocking at top 5th gear even at 15-20kmph. Surprising isn’t it? The motorcycle is available in more variants than colors. While Red, Black and Silver (go for the black one) are its only colors, it is available in as many as four different variants to suit your needs and budget. Below are the variants at the ex-showroom Delhi prices