My name is Hari and I am a biker. I just love to drive and is always hungry to drive more and more…. I don’t like to travel in a bus or train. I get my adrenaline released whenever I drive a bike on highways. This is the third motorcycle I am using. The first one being a Bajaj Pulsar 150 DTS-i and second bike was Suzuki Heat. I bought the GSR on August 2009. I was not satisfied with my Pulsar because of the reliability issues. My Pulsar began to show troubles from the time it clocked just 15000Kms. The issue was frequent damage to magnetising coil or starting coil. I changed it 4 times and finally decided to get rid of Pulsar. 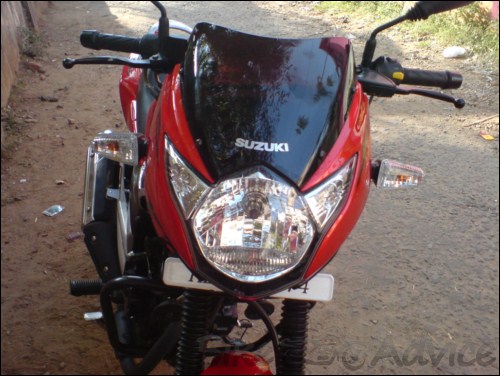 I took Pulsar because of its looks and I learnt a lesson from my experience with the first bike. Then because of the lack of budget I bought a Suzuki Heat in 2006. Even though it lack looks I like the bike for its smoothness and reliability. It was a trouble free motorcycle and I rode it for the last three and a half years and done 37000Kms on the odo. Then I decided to upgrade my bike to a 150cc machine. I have to travel 150Kms in a stretch four times a month from my home to college hostel. I need something with more power and weight and comfort.

Before giving my views about how I chose GSR, let me tell you one thing frankly! There are no bad bikes or best bikes. Every bike got its own pros and cons. And depending on the attributes you are looking for your choice will vary. So always evaluate which bike suits you the most. I mean I took Gsr for the optimum combination of Power, Comfort, Ride Quality, and Stability.

I considered Unicorn, FZ-16, Hunk and the GSR for buying. FZ was the bike I liked the most in case of looks but it was not good to ride in highways. I test drove each motorcycle. FZ may be fastest to reach 60kmph but after that it is a complete slug in higher ends. Hunk was also good looking but lack mileage. Unicorn and GSR, uffff…. I was confused between the two Titans. Both were equally good in terms of comfort, reliability (Since I drove a Heat and because of the good experience I believed GSR would also be reliable) It took three months for me to decide after reading many reviews and articles from bike advice (search for unicorn Vs GSR article in bike advice) as well as ownership reviews from mouthshut.com. And finally I decided to go for GSR as Unicorn is outdated.

When I first saw the GSR on a magazine I said Yack! I was upset by the way they mentioned that GSR is a copy of many of the existing bikes, headlight looks similar to Pulsar, tail lamp similar to cbz xtreme, side panels similar to hunk blah blah blah! When I enquired more on this bike’s design I came to know that it resembles the GSR series. Just search for the GSR600, GSR 1000 etc on google images and you can see that the tail lights and side panels are replica of the GSR family and also the headlight which resembles the Lotus flower.

When I reached the showroom to have a glance at this bike: OHH man its huge. I mean a big big monster. I love it compared to the other bikes like Apache, FZ and Hunk which looks small in terms of length and tank size. For me ‘SIZE DOES MATTER’. I am not describing about the looks of the bike as it is personal feelings. But I would like to mention that I love it for its simplicity. Since I took the bike on August 17th, till now I had done 9500kms and completed my fifth service last Saturday. So far I have not troubled by this bike in any manner.

Starting with the seating position it employs a commuter type seating position. To be said in simple words it gives an upright seating position which won’t cause any back pain or any kind of aches to joints. I had driven this bike from Cochin to Trivandrum and back in a single day. 440Kms and I didn’t feel any sort of tiredness. In a Heat I feel my joints get punished after driving it for 60Kms. I give an impressive five star rating for comfort.

Regarding the power GSR won’t give you a punch at the beginning. Or this is not appropriate for those people who want to stay ahead when the traffic light turns green. But it got its power delivery uniformly throughout the entire rpm range. That is you won’t run out of power even at higher rpms. The bike is a winner once you enter the highways. It climbs easily to 100kmps. But beyond that it becomes sluggish. The top speed I achieved on this bike is 118kmph so far (on the speedo of the bike). 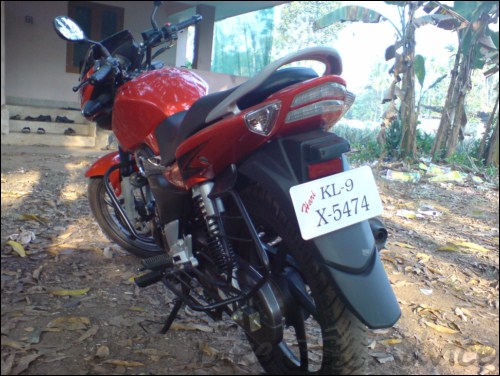 A four star rating is what I give for performance. If you are driving the bike only in city and you won’t go beyond 70kmph and if you are looking for a bike which is very quick at the lower rpms then this is not your cup of tea. In that case I advise you to take a test drive of the RTR160/180. But if you are driving on highways don’t hesitate to include GSR in your options and definitely go for a test drive. It gains speed at higher rpms. Once you past the 5000rpm mark the bike accelerate like a rocket. Awesome performance man.

Regarding the stability of the bike, this is the best bike I have driven so far. It is completely vibration free. It stays in control even at 100kmph. You won’t feel any sort of vibration at foot rest or on handles. That makes your ride on highways comfortable. About the brakes, the GSR employs disk brake at its front and a drum at its back and both brakes are good enough in case of an emergency. You won’t lose control even if you are new to disk brakes. (The right way of applying brakes is to apply both brakes simultaneously and never to use only one of them. Otherwise the tyre may skid). Again a four rating for the brakes.

Now comes the suspension. I had already told that the bike is comfortable to ride. I heard a lot that the monoshocks are more good. But seriously yaar, I didn’t feel much difference while riding a unicorn and GSR in terms of cornering stability and handling potholes.

Now comes the important factor for the Indian bikers Mileage. I am not sure about this part. During the time I bought this bike, for the initial 4000Kms, I kept the bike within the limits well below the 5000rpm mark. At that time I was getting a fuel efficiency of 54kmpl. Since the time I began to rev my gsr ( I used to drive at 75Kmph+ in highways) I got a mileage between 42kmpl and 51kmpl. So far the worst fuel efficient figure I got is 38kmpl and the best is as astounding 66kmpl. So I say a four star for mileage.

Overall the Suzuki Gs150r is a good package for Rs.67000 OTR. It surely gives you value for money. It got all the new generation goodies like the LED tail lamps and a brilliant LCD display which incorporates a gear indicator too. Also there is an economy/power mode which you can choose (this is strictly for beginners, ok) There is a light which glows at the time you need to have an upshift in gear. It is not that important as there isn’t much technical stuff in it. If you engage the economy mode the small led on the console blinks at 4500rpm. If you put the power mode it blinks at 8000rpm. That’s all for the modes. I used to switch off this thing. 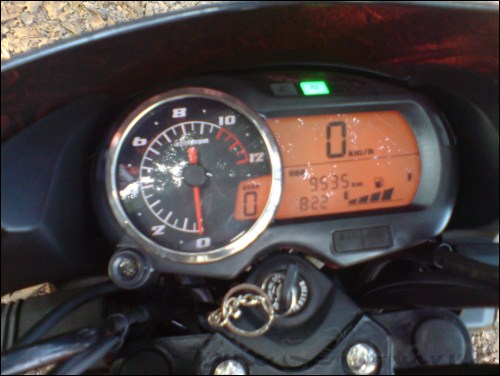 You can find the small led at the left bottom side of the console just near by the tacho meter. The digital console got a clock, two trip meters.

The Negatives: There is not much negatives. Still the fuel indicator in the digital meter is not accurate. But I heard it is common in all bikes employing digital display(apache, pulsars) . another shortcoming is the noise of the engine. It is not a pleasant sound like that of a Unicorn. But the sound becomes negligible at high speeds.

The Positives: There is an added advantage for this bike, the sixth gear. It improves the top end performance of the bike significantly and the gear indicator located inside the tachometer circle helps to identify in which gear you are(in case you are confused). For its price it delivers everything that a 21st generation biker wants, digital goodies, optimum combination of power and mileage.

I would like to tell you that you won’t regret buying a Suzuki GS150R. But again it depends on what you want from a bike. That’s all folks that I have to say. Make sure that you test drive every motorcycle before deciding which one you buy. Wear a helmet on highways and please do all the services at the right time in an authorized service centre itself. It will enhance the life of your motorbike. Thank you for reading my review and post any question regarding GSR and I will help you to get an answer!