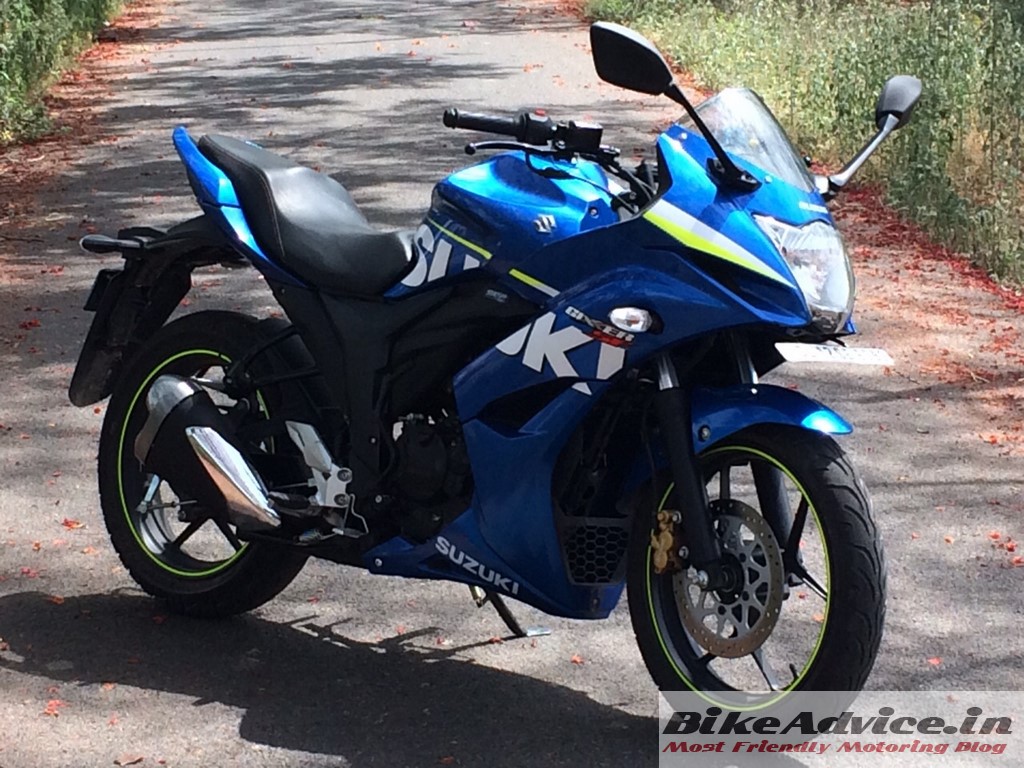 When I’m not using any of my two-strokes, I borrow my younger brother’s Yamaha YZF-R15 V2 to commute. Telepathic handling, supreme reliability, and the R1/R6 inspired design had formed the main reasons for us behind this purchase around two years ago. However, I reckon that for the majority of buyers, it’s only the “full-faired-looks” that drive them to emotionally blackmail their mother to apply the same trick with the father to siphon off partial or complete in-house finance. With zero installments. That also makes me think that, in contrast, youngsters who buy motorcycles with their own hard-earned money know what they are buying… 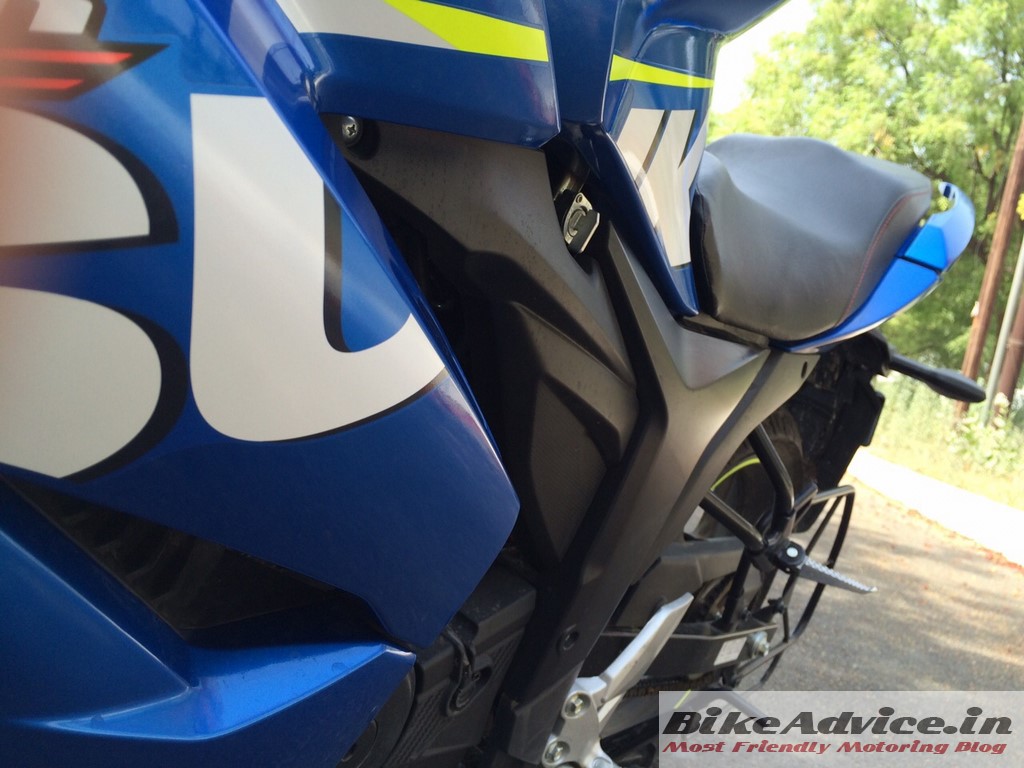 Okay, without deviating any further, I’ll get back to the topic of full-faired bikes. Well, the point is, that such bikes happen to be the most lusted-after two-wheeled machinery in our country, cubic capacity (the lack of it rather) notwithstanding. And it’s not a new trend too – I clearly remember people fabricating sheet-metal fairings for Yezdi Roadkings and Yamaha RD350s back in the late 80s and 90s. But it really caught on when a certain Mr. Abraham and his accomplices on a GSX-1300R and four GSX-R1000s, respectively, did their own version of Fast & Furious around a decade ago. Suddenly, every poser worth his fake Ray-Bans, wanted to ‘modify’ his yellow Karizma into a Hayabusa. Truth be told, in most cases, the finished (no pun) bike did look better than the current, new Karizmas…

Surprisingly, despite the surging demand, not only did it take six years for companies like Hero to bring a full-faired version of its flagship motorcycle, we still do not have much to speak of as far as affordable full-faired bikes are concerned. In fact, we have none in the sub-one-lakh-rupee segment. 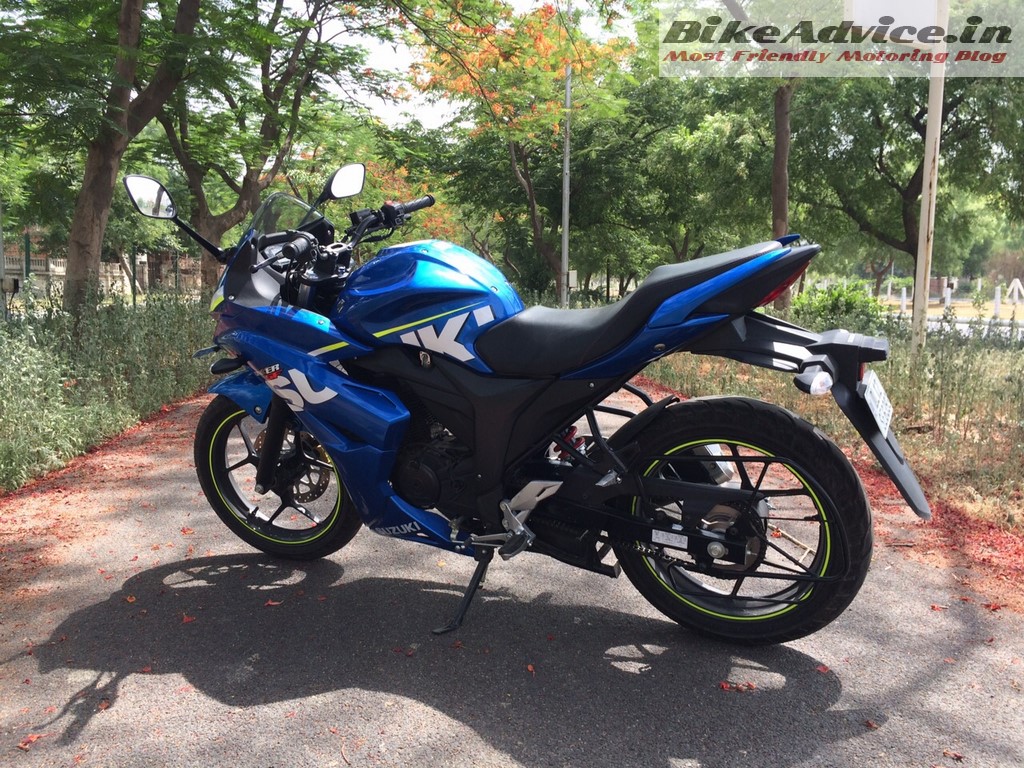 No, wait, we do have one NOW – the Suzuki Gixxer SF! The manufacturer took the best motorcycle in the segment; avoided experimenting with the tried-and-tested bits; made it even more visually-appealing, and priced it way below the segment leader. What happened thereafter? Pandemonium. In other manufacturers’ board meetings, that is. All this, while Mr. Ito wheelies his way to thank the team behind the SF. 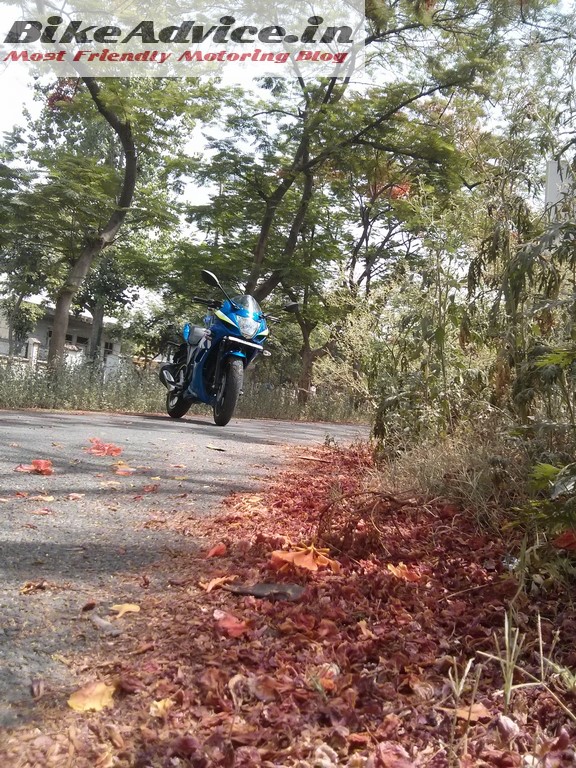 We’ll take a look at what makes Suzuki’s latest click in the ever-burgeoning 150 cc segment. Also, as almost all of you would know that the SF is basically a Gixxer with a fairing, I’ll only touch upon those points in this review that will tell you how different (better or worse) the SF is than its naked sibling.

Does it have the show?

Motorcycles are not too dissimilar to humans. Beautiful in their purest and most organic form (read “naked”), they sometimes go a little too far to garner attention of their potential partners (words like silicone, cosmetic, FRP, faux, etc. come to mind…). Not surprisingly, the results generally are despicable, and therefore fall flat on the ground. Face first. 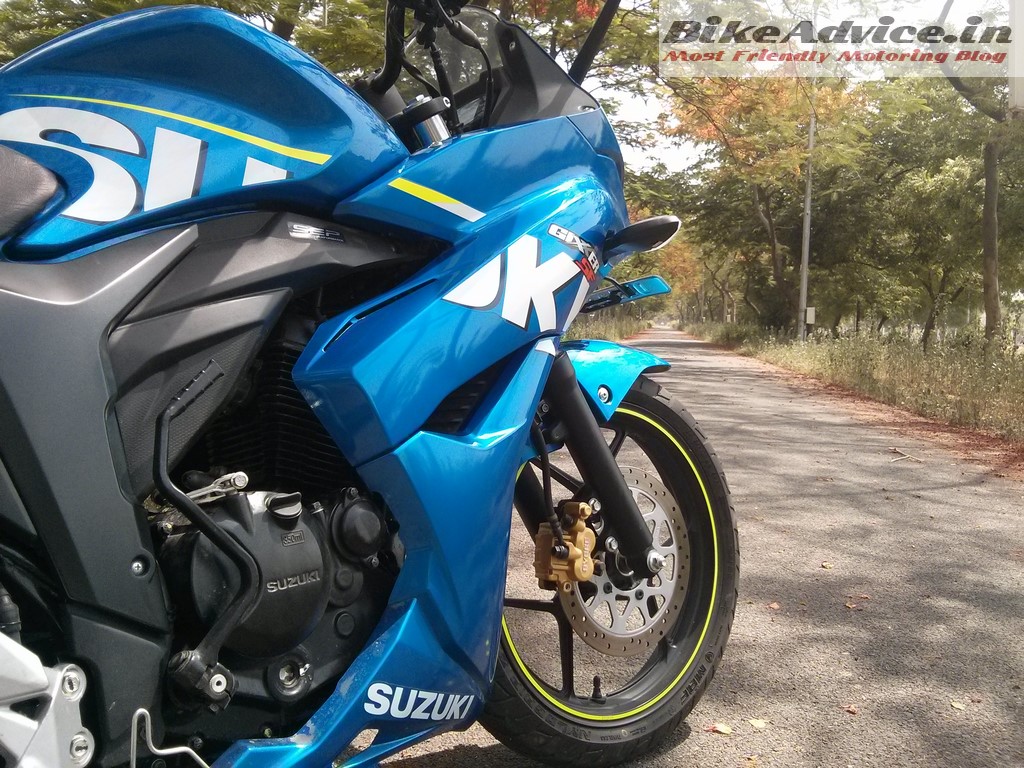 That’s not the case here though! Suzuki gave us the smashing Gixxer last year, only to follow up with a full-faired version now, which looks even better! Yes, despite being a fan of nakeds, this once, I will buy the SF for its looks alone if I were to pick up a bike in this segment – it’s THAT GOOD! Just look at the design and integration of the fairing — it’s clean, unfussy all throughout with sharp, yet simple lines, cuts and creases in profile, and contains just the right amount of girth when viewed head on. Full marks to Suzuki then for making it seem and feel like a hand-tailored suit on a muscular body, rather than a carelessly placed XL hoodie on a malnourished mannequin. 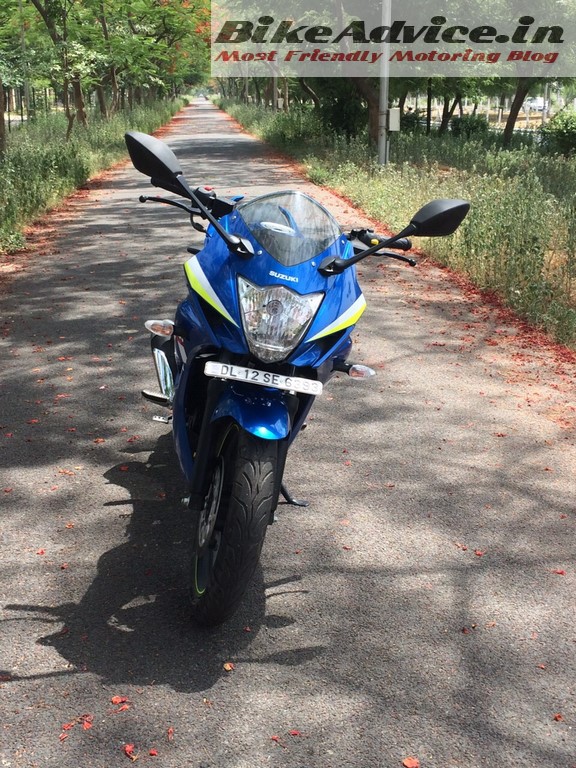 Our test bike wore Suzuki’s MotoGP livery and I cannot tell you the number of times I was asked questions (forget the mere turning of heads) such as “Wow! Which bike?”, “Can you please start it and make us hear the sound?” , “What? Less then a lakh? You’re kidding, right?”, and so on! 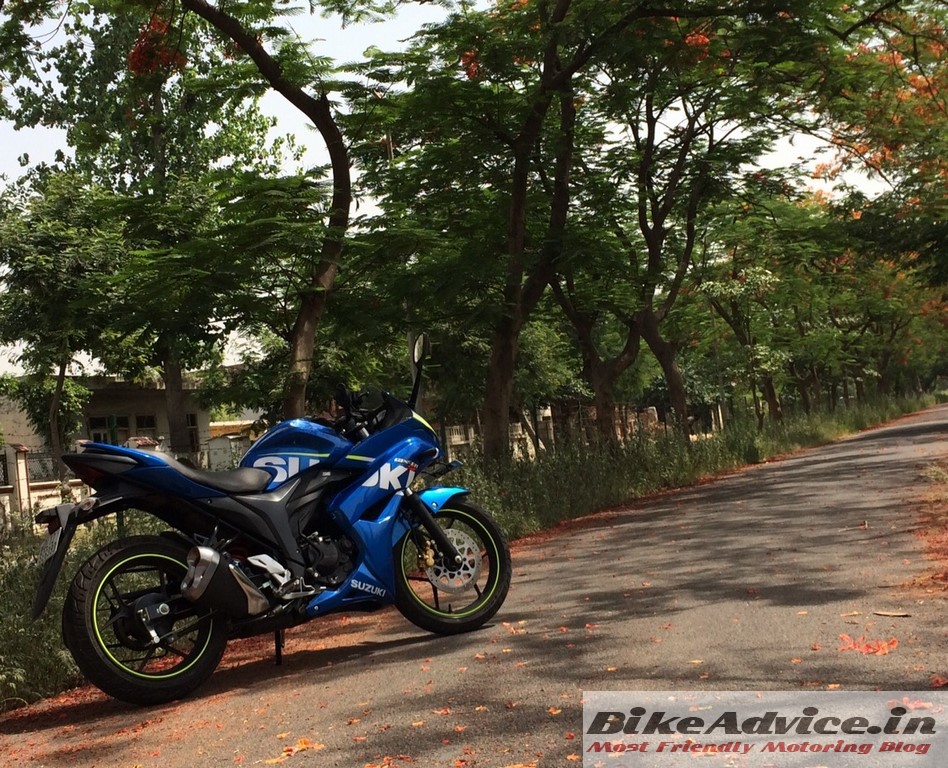 The more observant could identify it as the “faired-Gixxer” the moment their eyes met the peculiar exhaust can. In fact, it might just be me, but I so wanted to see a conventional round end-can, say, a shorter version of GS150R’s minus the shiny heat shield. That would have given the SF an even more distinct identity. Perhaps, Suzuki are saving it for the new 250 in the pipeline… As of now, other than the fairing, the SF gets a new top triple clamp, aluminium (as opposed to chrome on the Gixxer’s unit) exhaust tip, pinstripes on wheels, and clear-lens turn indicators.

Does the go match the show? 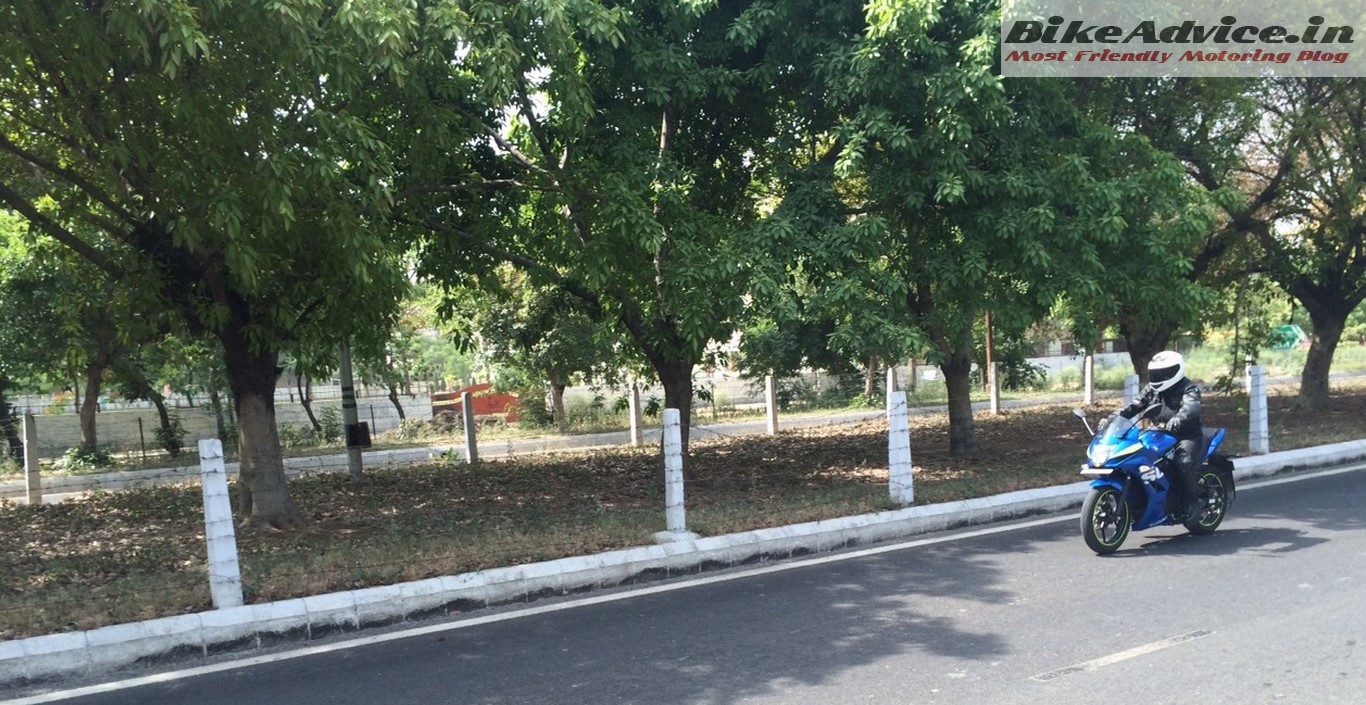 The last sentence of the previous paragraph lists ALL the new stuff the SF has received when compared to the Gixxer. That should also tell you that everything else is shared by both the bikes. Right from the engine, gearbox, suspension, etc., to the first-aid box under the seat. And it’s not a bad thing, really. The Gixxer was already a sprightly machine to begin with and I am happy to report that the character of the bike remains unchanged in its Sport Fairing guise. That fairing weighs four kilos and makes no noticeable difference while accelerating from a standstill. But where it does make a difference, and SF buyers will rejoice in this knowledge, is the top speed. 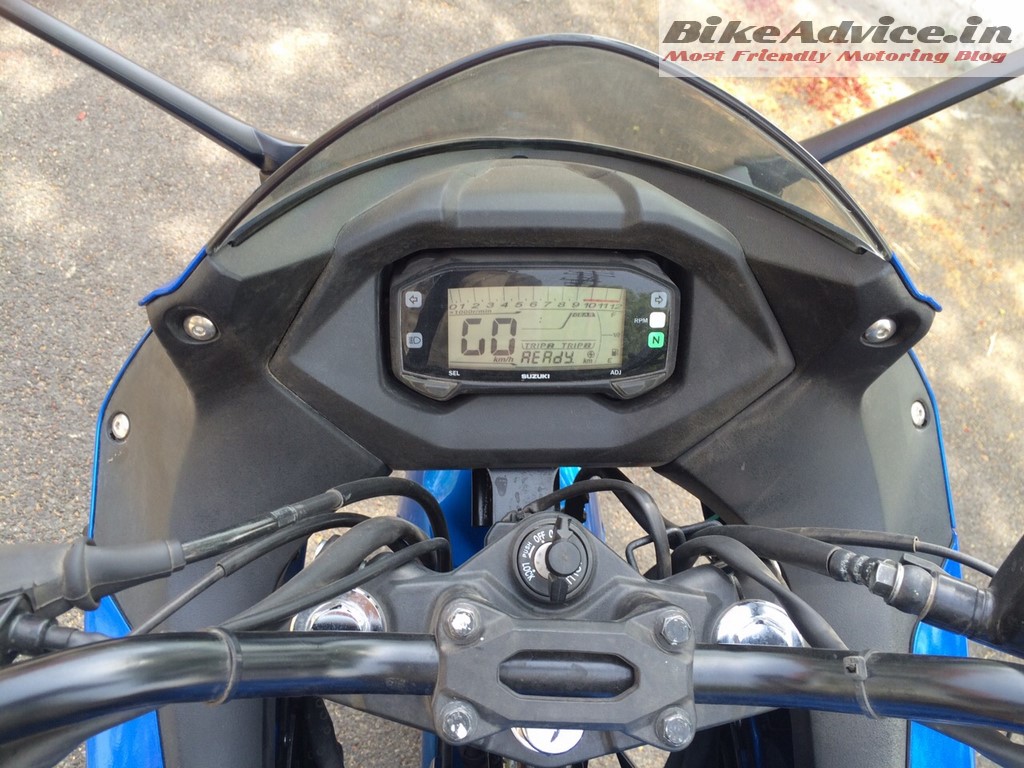 Well, the last I saw on the speedo was 124 km/h on my ‘regular’ commute to work; the Gixxer, in similar conditions, had touched 116 km/h. I’m certain that in less traffic the SF would have managed to at least touch, or maybe even cross, the 130 km/h mark. So I have no reason to doubt Suzuki’s claim that the SF’s fairing was tested in the same wind-tunnel where the wind drag on their GSX-Rs is tested. 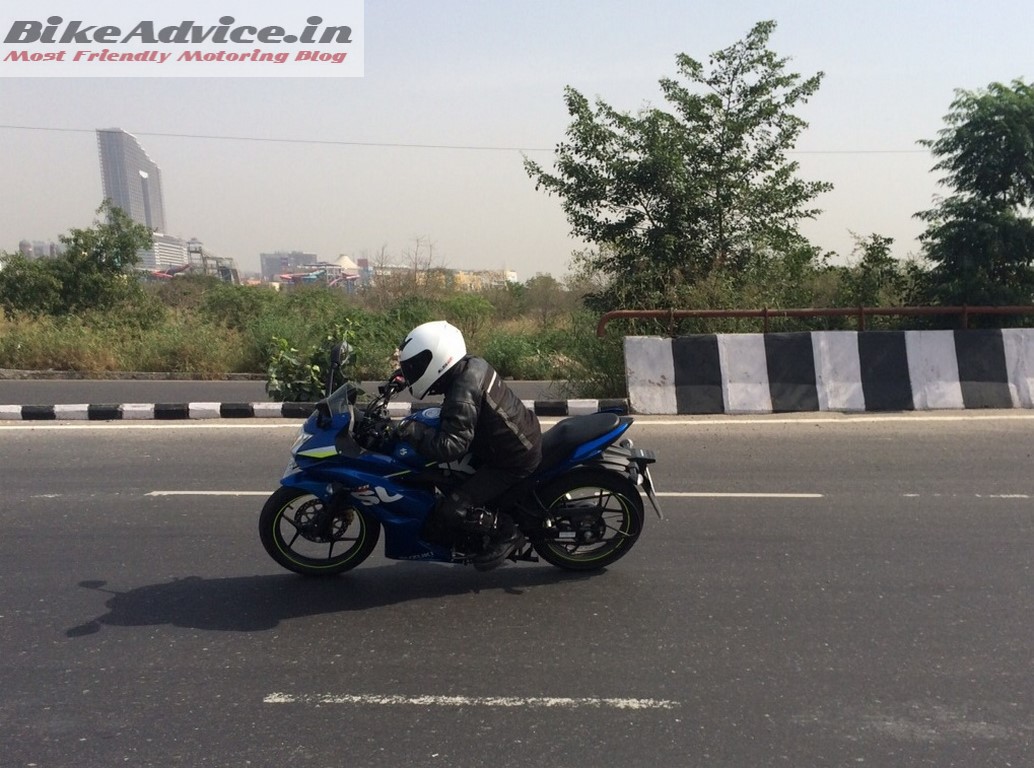 Handling wise also, the SF is again a wee bit better than the already sublime Gixxer! It’s more stable at speed, and still equally flickable in tight bends. Plus, it is decidedly more poised in fast corners! You sure Suzuki, you haven’t made any changes? 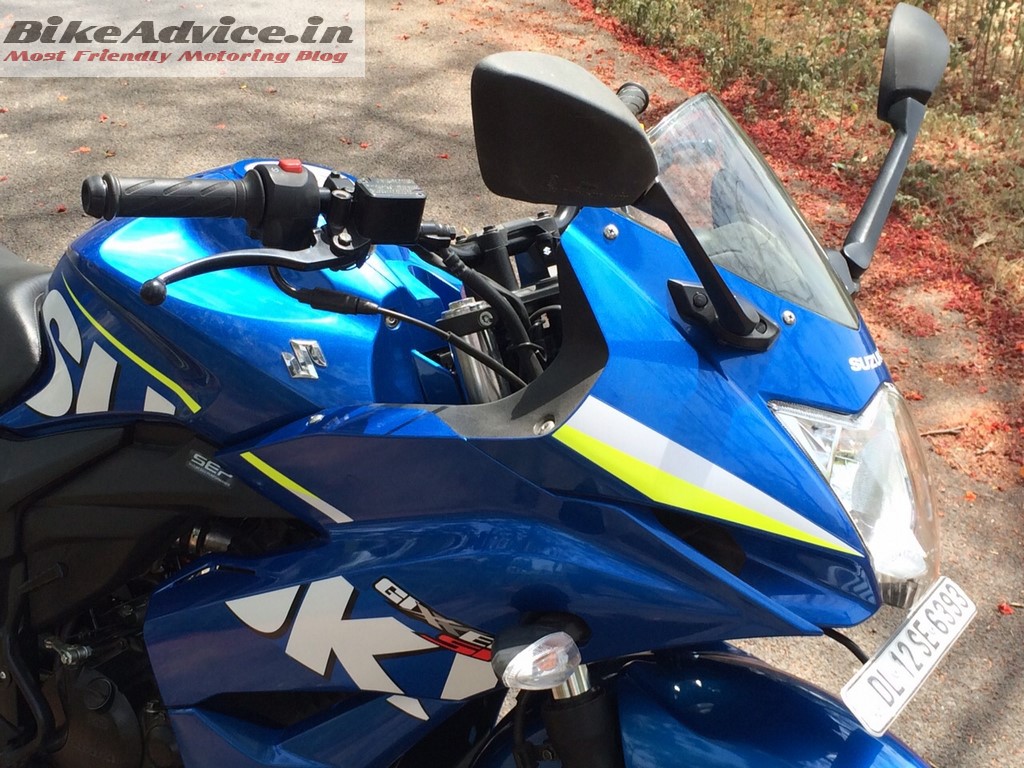 Everything else, as mentioned earlier, remains the same. So, the ride is fantastic; tyre grip remains phenomenal, and even the brakes continue to stop the bike in a straight line without any drama, whatsoever. Okay, in terms of fuel efficiency, the SF returned only 41 km/l as against the 50 km/l we managed on the Gixxer. However, let me also mention that the SF we tested was a new bike — it only had 600 km on the clock. 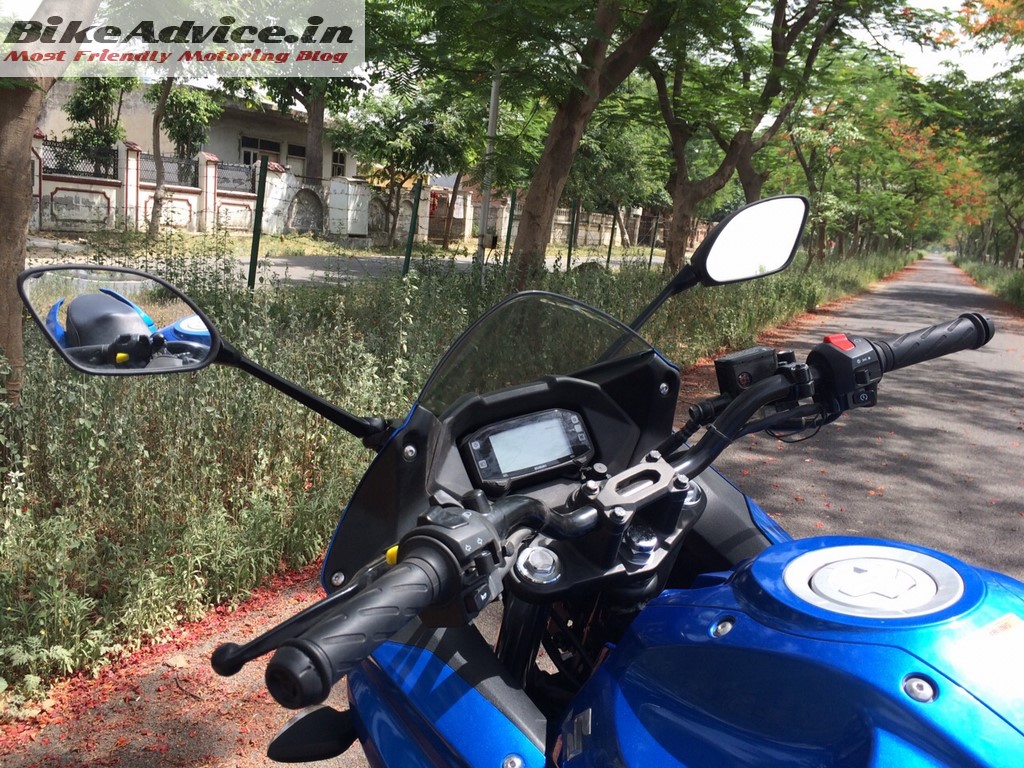 Plus, the media bikes never get to experience the luxury of “break-in” period. That means, fuel efficiency of 41 km/l is actually fantastic for a bike that has been thrashed from day one in the hands of over-enthusiastic testers. Therefore, we expect the figure to be closer to Gixxer once you’ve completed the running-in of your new bike properly.

Does it make a compelling buy?

Didn’t I mention in the beginning that I would buy it for the looks alone if I wanted to buy a motorcycle in this segment? In fact, I had said that to myself before even swinging a leg over it when I had gone to collect the test bike. Why? It’s a no-brainer, really — I had already tested the Gixxer, so I knew what to expect from a four kg heavier bike, and, it looked even better in flesh and metal than in pictures. 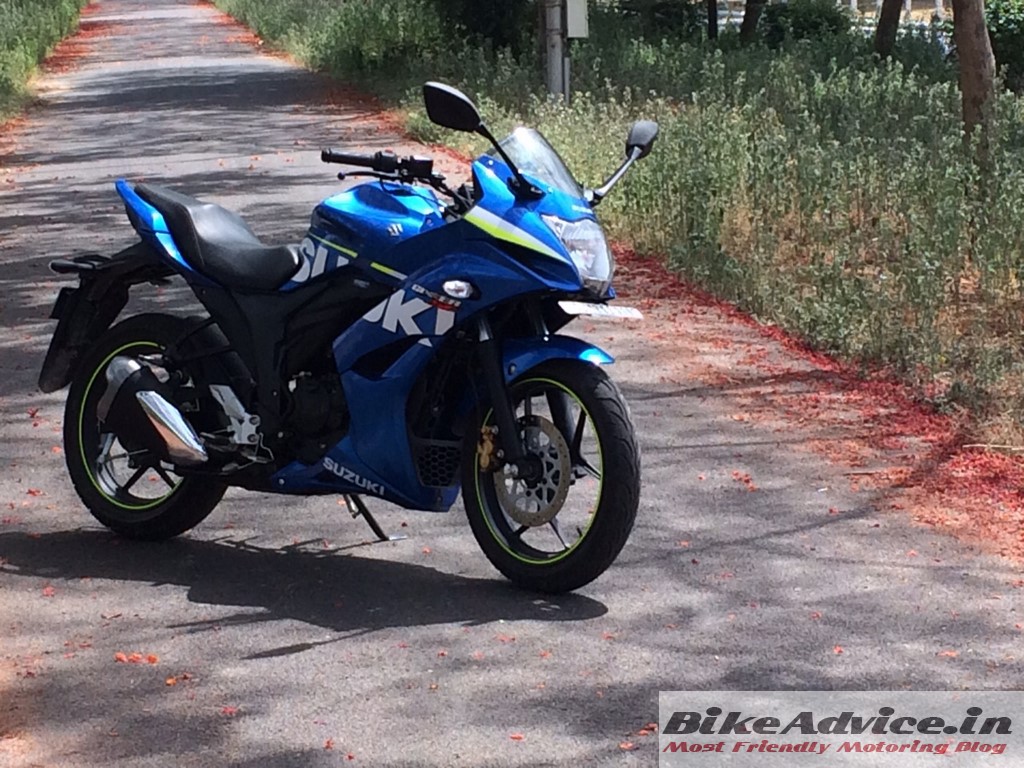 But even I hadn’t expected the SF to exceed my expectations, which it did, albeit by small margin, and that itself says a lot about what is essentially a model with cosmetic touch-ups. Also noteworthy is the fact that the bike does not overheat, thanks to Suzuki’s patented SJCS (Suzuki Jet Cooling System) technology and the good amount of air vents in the fairing. If the bike can survive continuous high speed operation in Delhi’s harsh summer afternoon, it would survive everywhere I believe!

Also Read: SHOOTOUT: Suzuki Gixxer vs Yamaha FZ-S: Which ONE..?

Suzuki is offering the SF in three color options – Glass Sparkle Black, Pearl Mirage White and the Metallic Triton Blue, the edition which we tested! 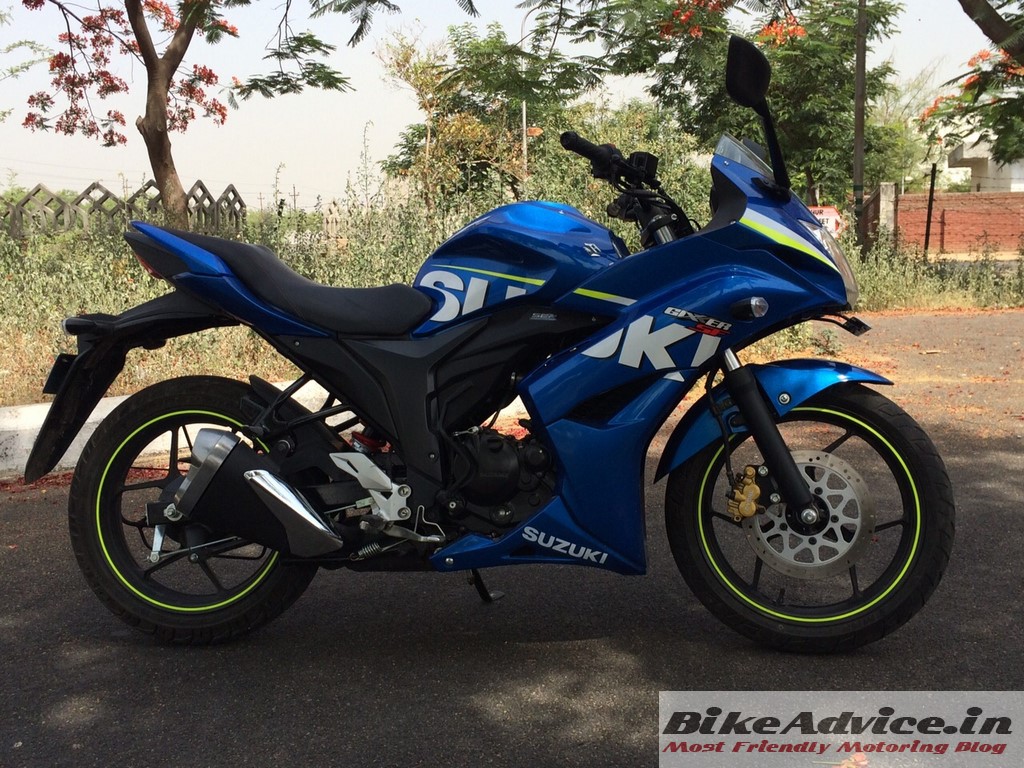 So, at INR 83,439 ex-Delhi (the MotoGP edition is around INR 2,000 dearer) one gets a full-faired motorcycle that looks even better than some much more expensive ‘full-faired’ bikes; handles great; rides well, and also betters most in the segment when it comes to fuel station visits. What else could you ask for? Clip-ons, rear sets, and a race exhaust? Well, you might just get lucky… Stay tuned as we’ll be bringing a short ride impression of the Race Edition Gixxer SF we rode last weekend at the Kari Motor Speedway!