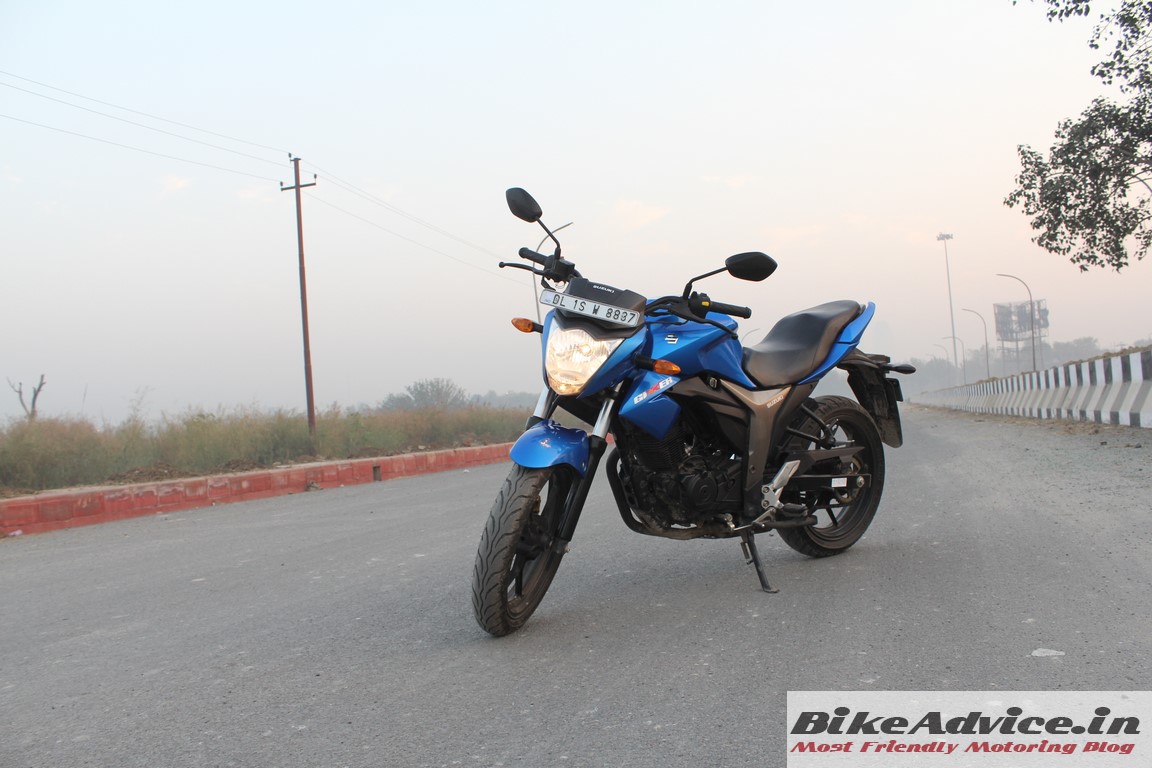 Suzuki makes some of the most wonderful motorcycles on the planet, and thanks to the all-conquering GSX-1300R (the Hayabusa, for the uninitiated), the brand’s image as a performance-bike maker has been deeply entrenched into the minds of the masses too. Of course, the more enlightened of the lot have always been aware of the company’s technical prowess, and they have also not forgotten the 80s’ AX-100s, 90s’ Shoguns, and even the first Fieros. That is why both these sections of the bike-riding populace have expected a lot more from Suzuki across all segments in India. 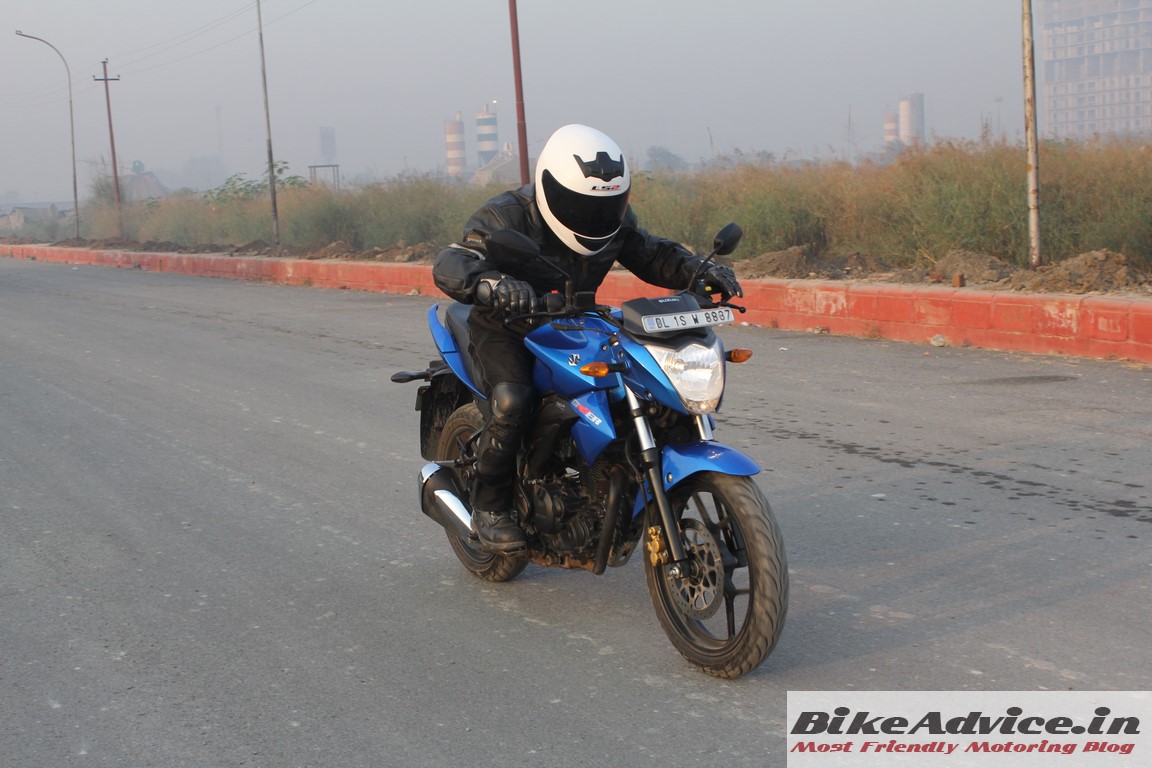 Also, while on the one hand its erstwhile partner, TVS, did its own R&D on the Fiero’s engine and gave us the Apache RTR, Suzuki India on the other hand gave us the demure GS150R. The bike was so shy that it hardly ventured out of the showroom. Which is a pity, because it was a fine product, marred only due to its inconspicuous looks and zero promotion by Suzuki India.

But it’s better late than never, right? So yes, after putting in around a good two years in development, Suzuki India finally launched the Gixxer in September this year. The motorcycle is already doing good, but since many of our readers still wanted us to review the bike, we complied!

Aah, that design! This Suzuki looks beautiful from every angle. Generally, you would not expect a bike from this segment to be turning heads but this one does, and quite a lot! The Gixxer looks muscular, but not bulky, and the proportions are just spot on. The sharp headlight is mounted low and covers the lower triple clamp that gives the bike a hunkered-down, menacing look when viewed head on. The well-sculpted tank gets superbly designed extensions and the black & grey mid-section is nicely done too. The Y-shaped three-spoke alloys look fab and just look at that exhaust! That’s, without a doubt, the best one so far in this category of bikes. 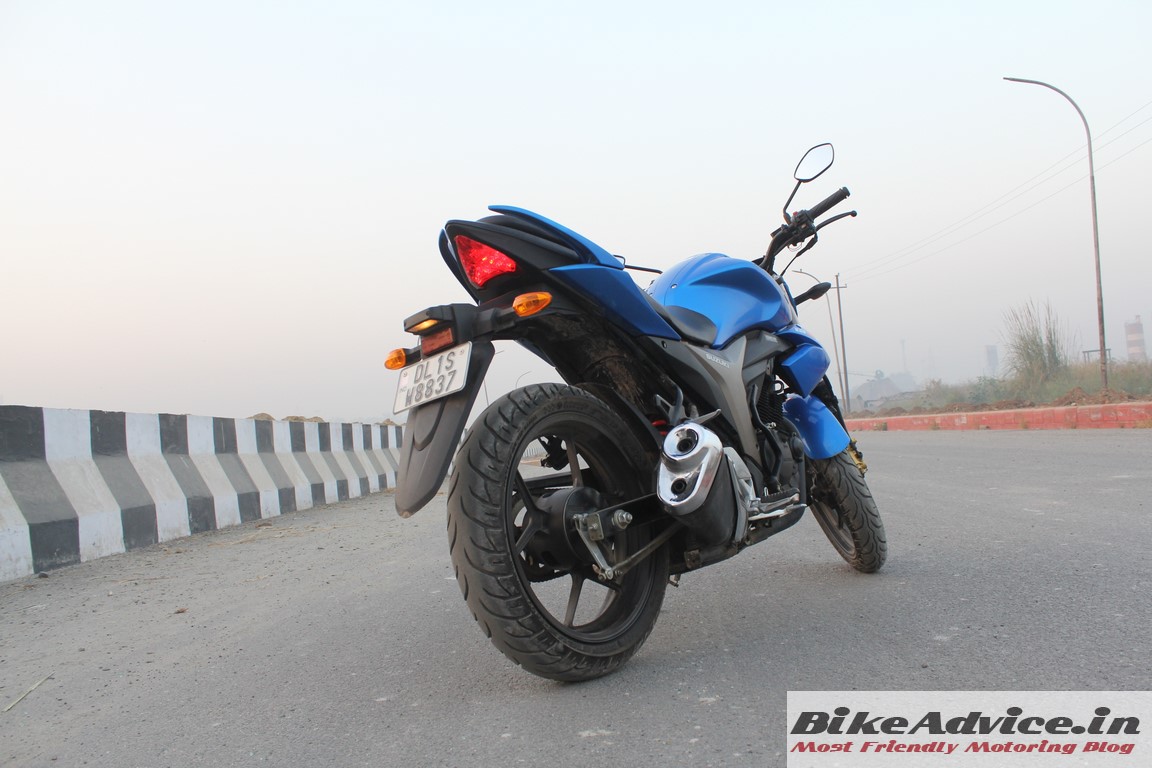 Moving up, at the rear, you’ll almost miss the large grab rails; yes, they are large, but may still go unnoticed – that’s how beautifully they have been integrated into the tail-section. The tail lamp gets LEDs while the rear mudguard is a long two-piece affair giving you the advantage of shedding some of its plastic without using a hacksaw. The overall build quality of the motorcycle is excellent and the bike feels solidly put together, however, the plastic and finishing of the switchgear could have been better. 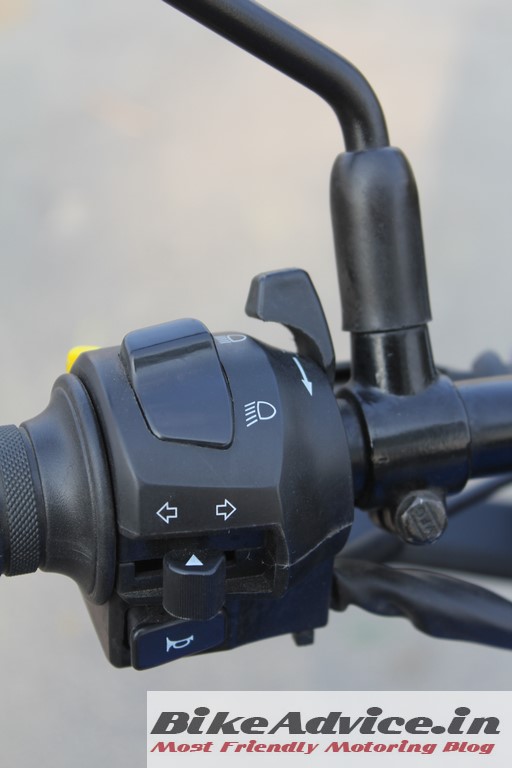 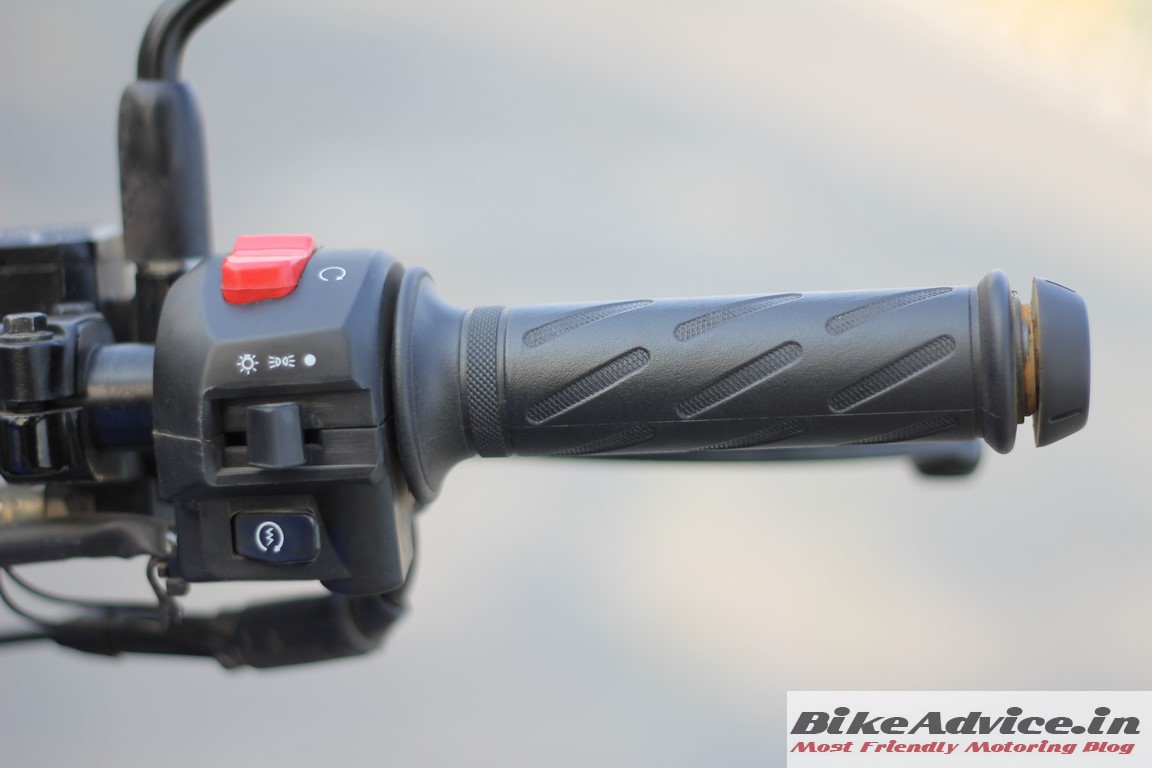 Also, the fuel-filler cap is a chunky piece but does not come with a hinge and you have to hold on to it when it’s your turn at the fuel pump. 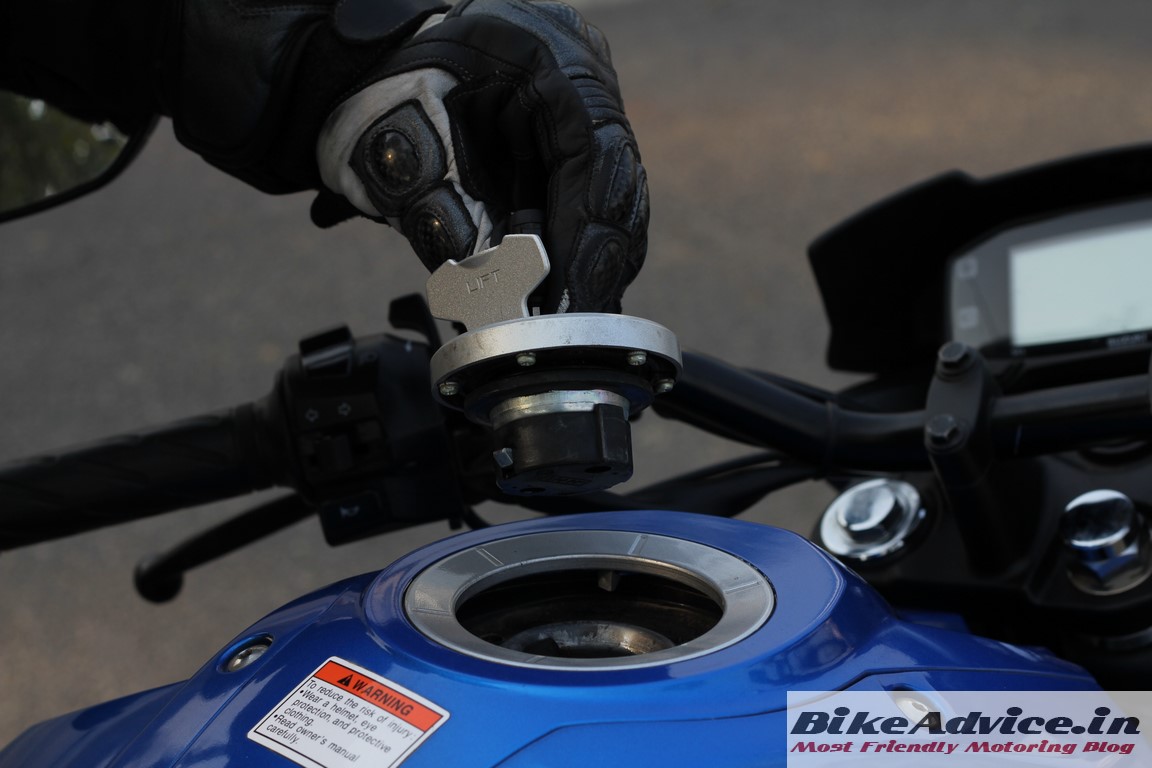 But Suzuki India has really upped the game when it comes to instrumentation. The all-digital display, other than containing a bar-type tacho, fuel-level meter, numeric speedo, odometer, and two trip meters, also shows you the time, the selected gear, a fasten-your-helmet-strap warning, 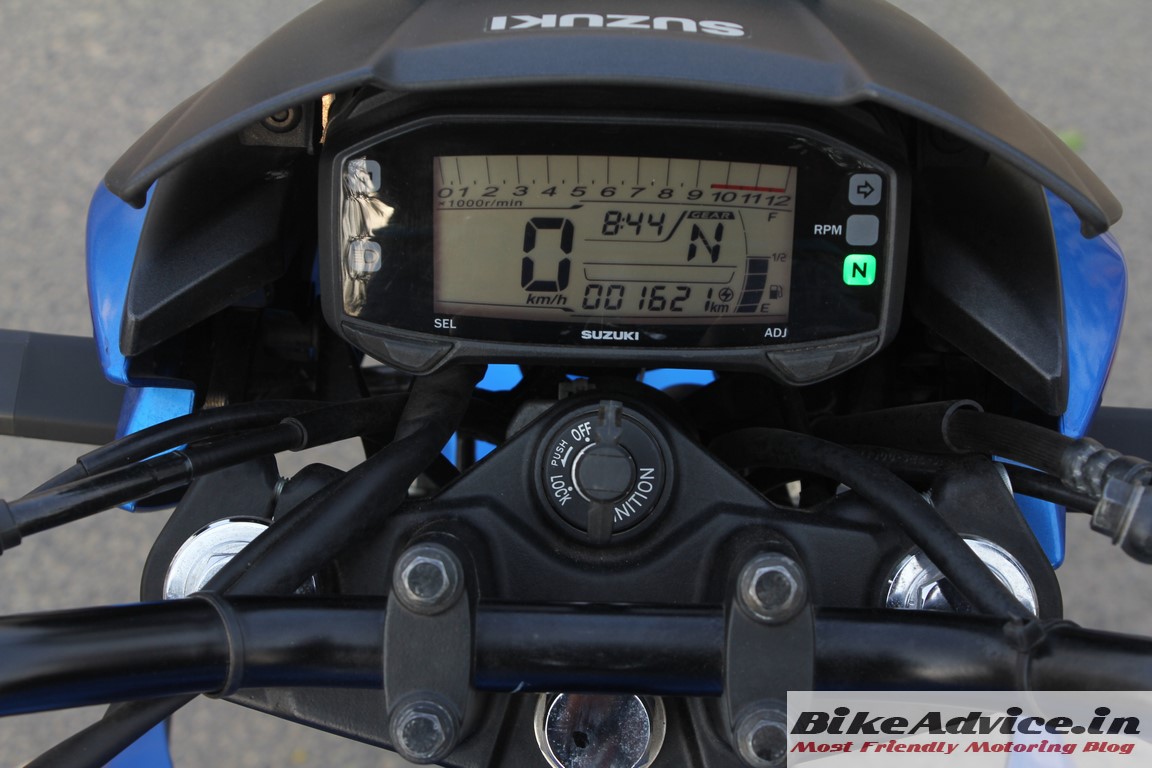 and the number of missed-calls from your wife/girlfriend.  Okay, I made the last two up, but seriously, forget the 150-160 segment, this one’s instrument cluster is so comprehensive that only the much expensive (comparatively) KTMs come to my mind when I think about such in-dash features. 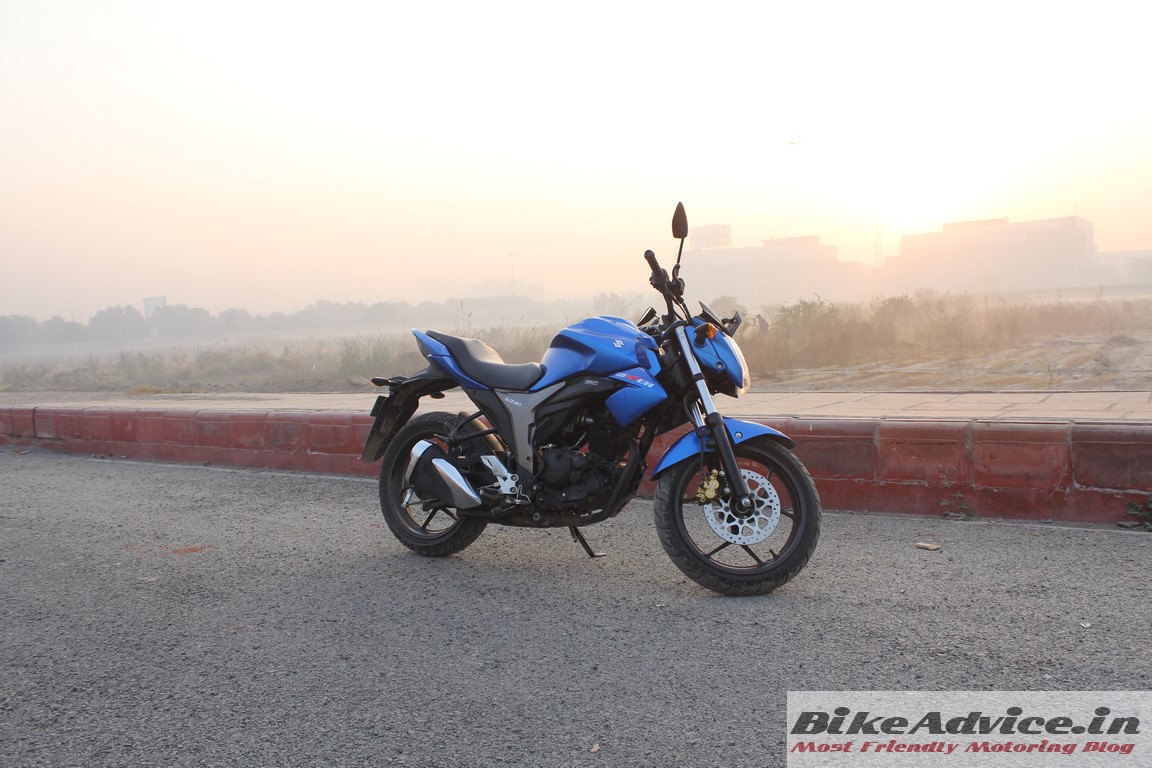 It’s not just the boy-racers-on-a-budget who want the best accelerating 150 cc motorcycle there is; that office-goer-in-denims who plans to upgrade from his current 100-125 cc steed will do it only if the bigger-engined bike makes his regular rush hour grind less painful. A bigger engine, more often than not, means more power which translates into a whole lot of goodies that alleviate your traffic woes.  Like, say, ‘getting away from the crowd’ for one. The Gixxer has that covered and produces a healthy 14.8 PS at 8,000 revs and 14 Nm of torque at 6,000 rpm from its carburetted, SOHC, 2-valve 155 cc motor. 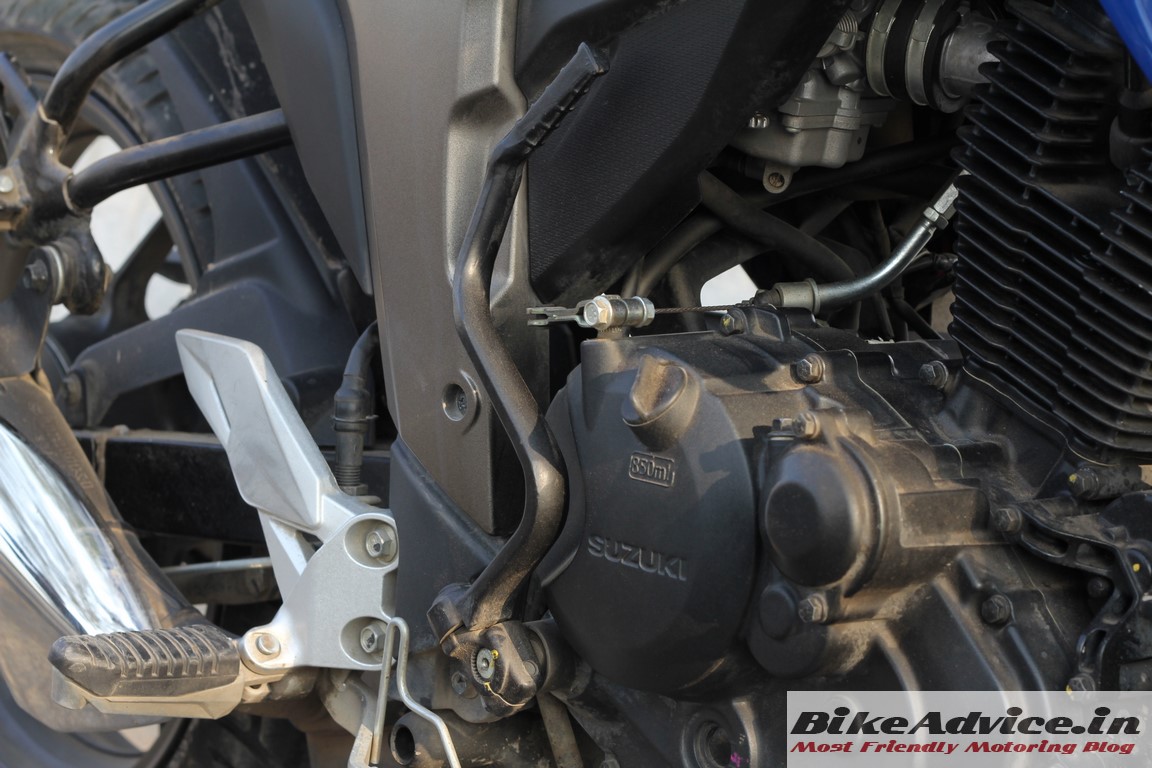 The power and torque figures are better than both the Hero Xtreme’s and Yamaha FZ-FI’s, but since an engine is as good (or bad) as the gearbox it comes mated with, those figures would have little meaning if Suzuki didn’t equip the bike with the right transmission. Well, fret not as the Gixxer comes with one of the best gearboxes in the segment and the five-speeder is not only a slick and refined unit, it gives the bike some unheard-of mannerisms – 25 km/h in top (fifth) gear sees around 1,300 rpm on the tachometer, and there is no snatching or knocking at that speed! 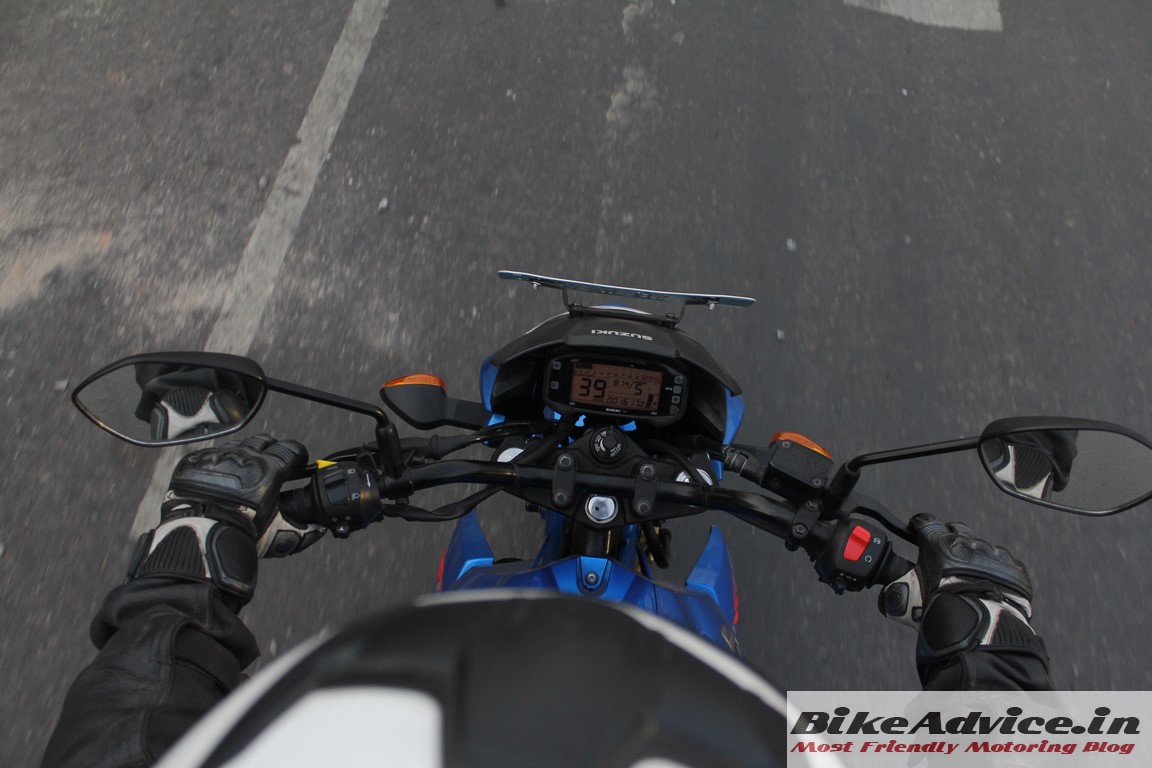 Plus, when you are in a mood to gun it, the 135 kg Gixxer will happily oblige with sprinting to around 90-95 km/h in no time. Post that speed, the progress becomes a shade slower, and I could manage a speedo-indicated 116 km/h before the vehicles ahead started to appear too close for comfort. I reckon the Gixxer should touch 120 km/h, on the speedo, on a good day. 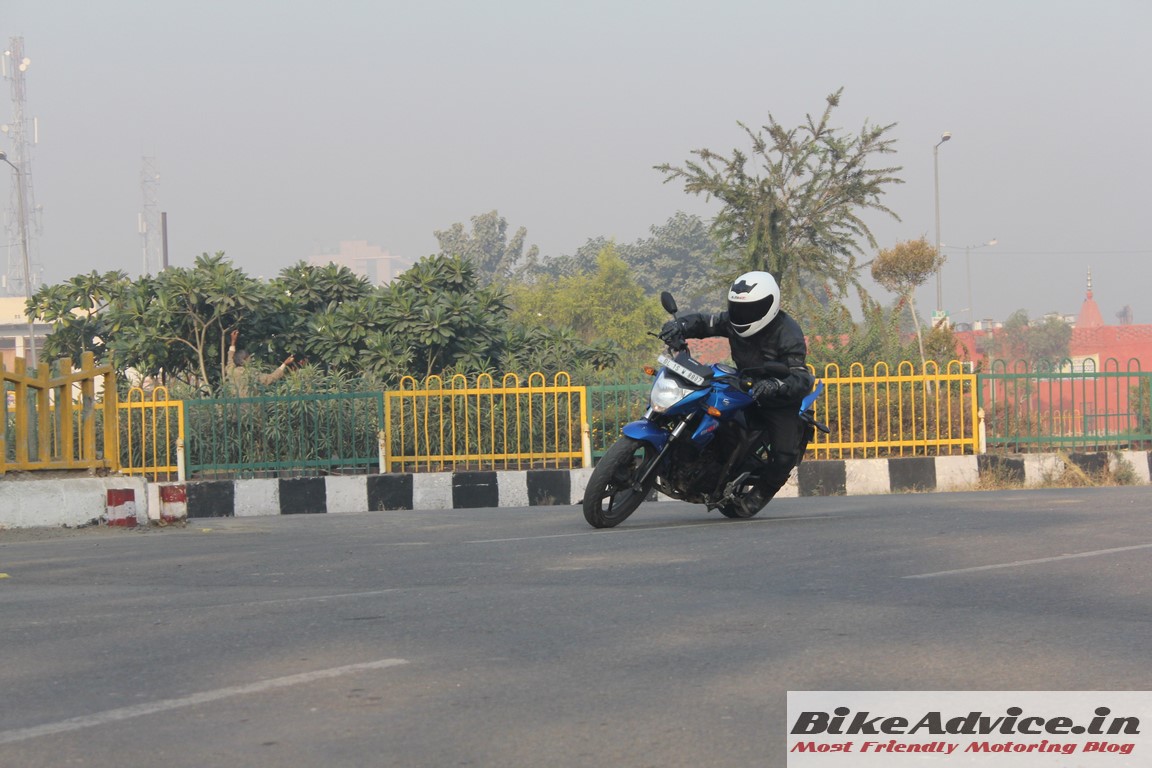 Handling is one thing where the Gixxer would leave the competition for dead – yes, it’s that good! It inspires so much confidence that this might just be the bike to get your first knee down on. The featherweight would change direction in an instant, but without being fidgety in a straight line at high speeds; in fact, it remained super-composed at the aforementioned top-end. 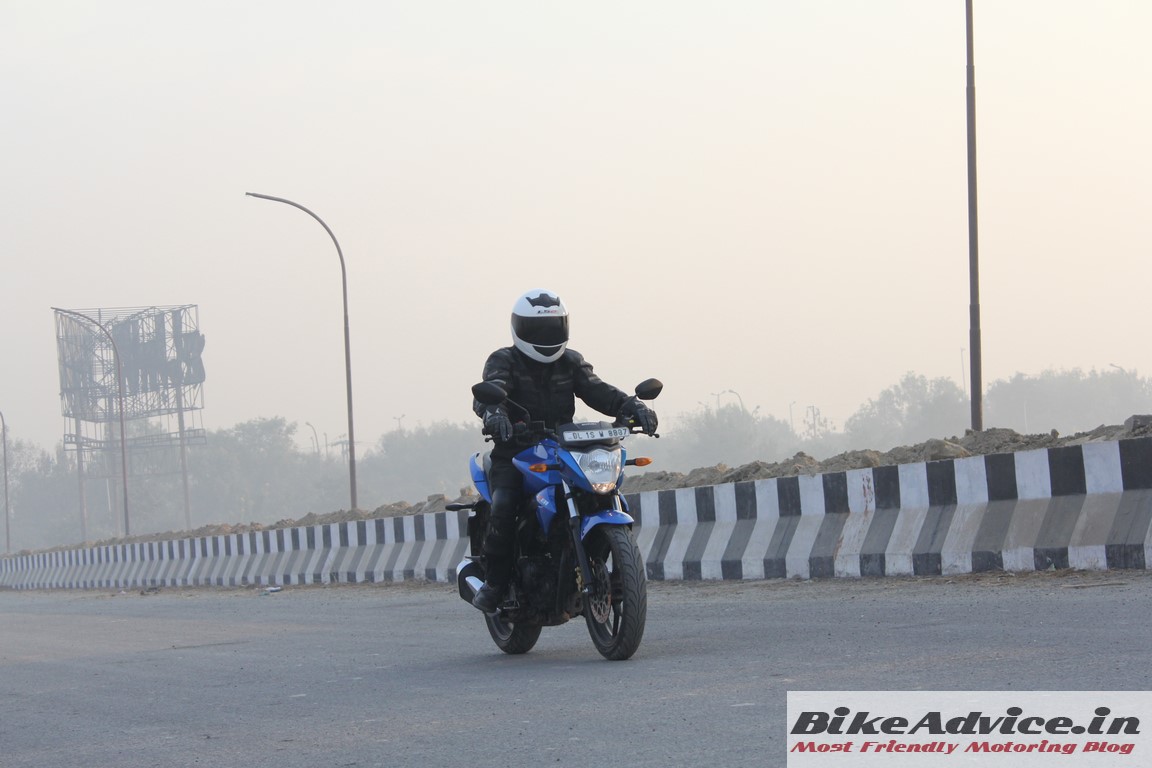 The single downtube chassis (and also the engine), according to Suzuki, has been developed by the same engineers who designed the company’s GSX-R series! And it shows. If the Gixxer sneaked out of home on a Sunday morning for a couple of hot laps on a track, the GSX-R 1000 and 600, standing in the paddock with their tyre-warmers on, would look at each other and nod in acknowledgement of the kid’s handling prowess and won’t, at all, scoff at the idea of the young one getting their legendary family name. 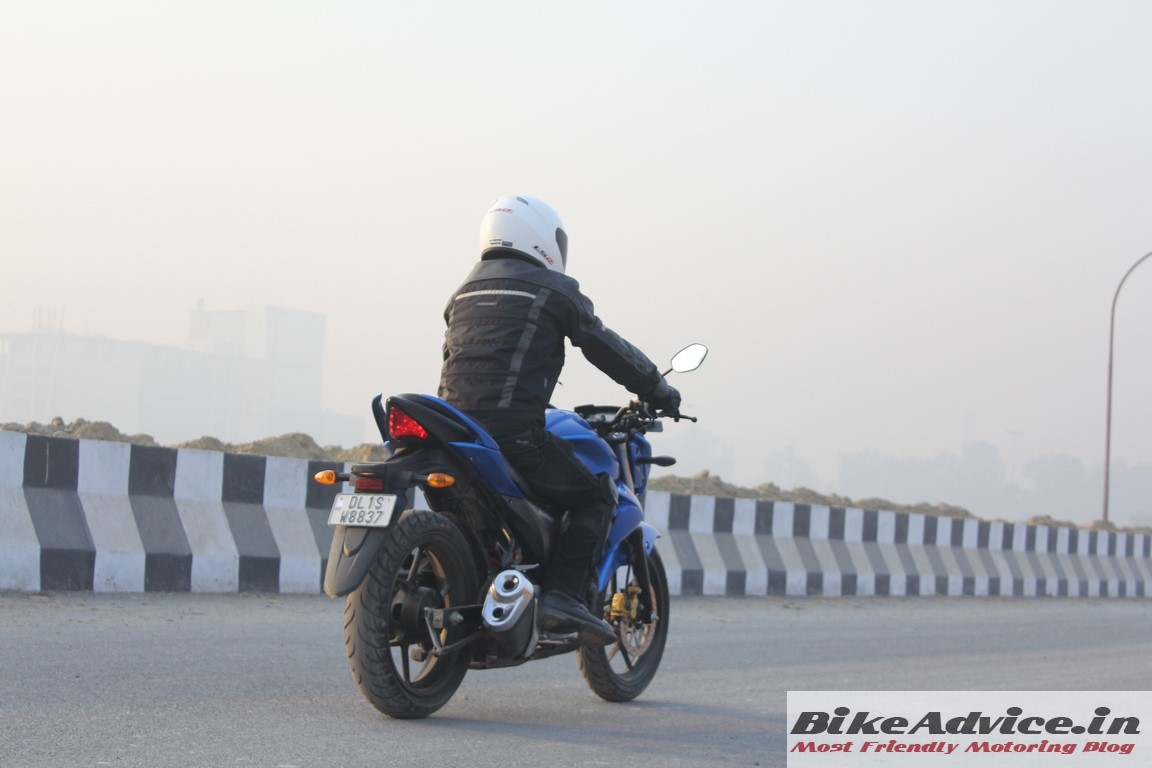 Also, there is no vibration whatsoever throughout the rev range, save for towards the red line, but even then it’s a faint sensation that you might only feel through the tank (if you are hugging it, i.e.) – the handlebar and footpegs remain devoid of it all the time! So no funny tingling sensations in the butt or the hands, and that coupled with the well-padded saddle will entice many owners to get Leh’d on this one… 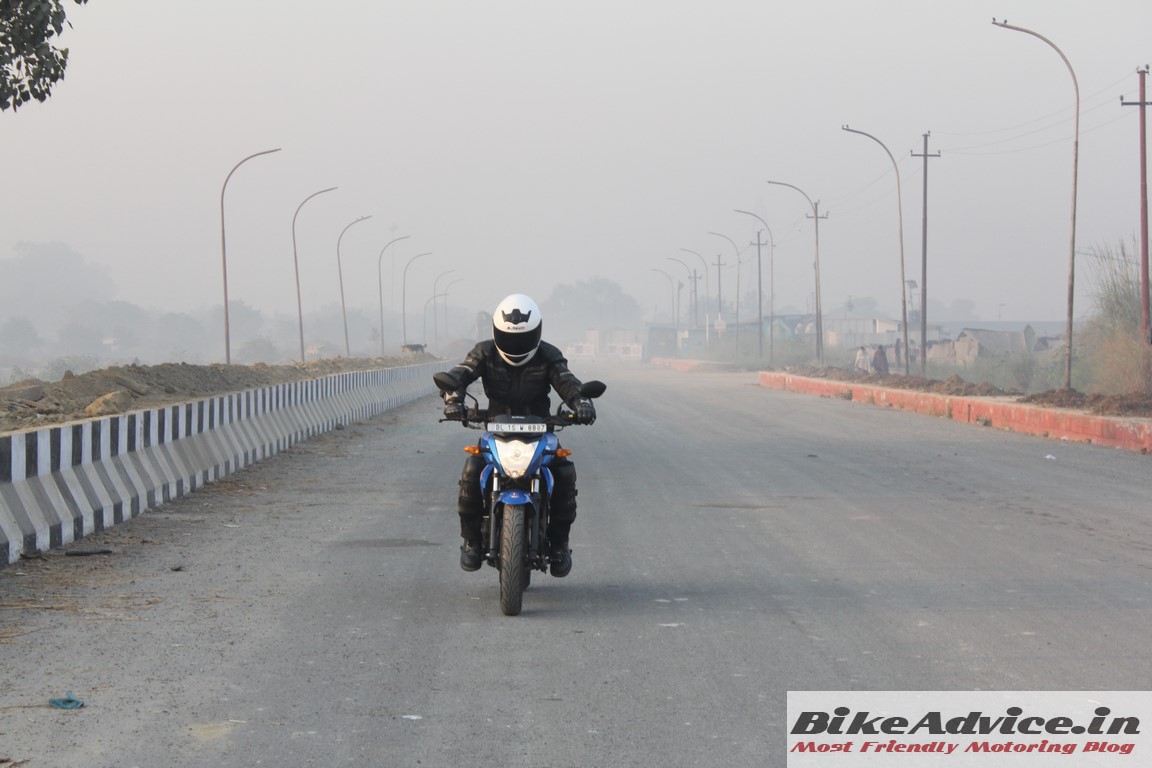 The bike gets chunky 41 mm front forks while a monoshock takes care of the damping duties at the rear, which, by the way, comes with seven settings for spring preload adjustment instead of the regular five. And that’s nice because you WILL have to play with it to tune it according to your taste and/or need. I say that because even though the stock setting (my test bike came with the adjuster at position 3) was perfect for my 52 kg weight while riding solo, the rear bottomed out on speed-breakers while riding two up with the pillion weighing around 60 kg. 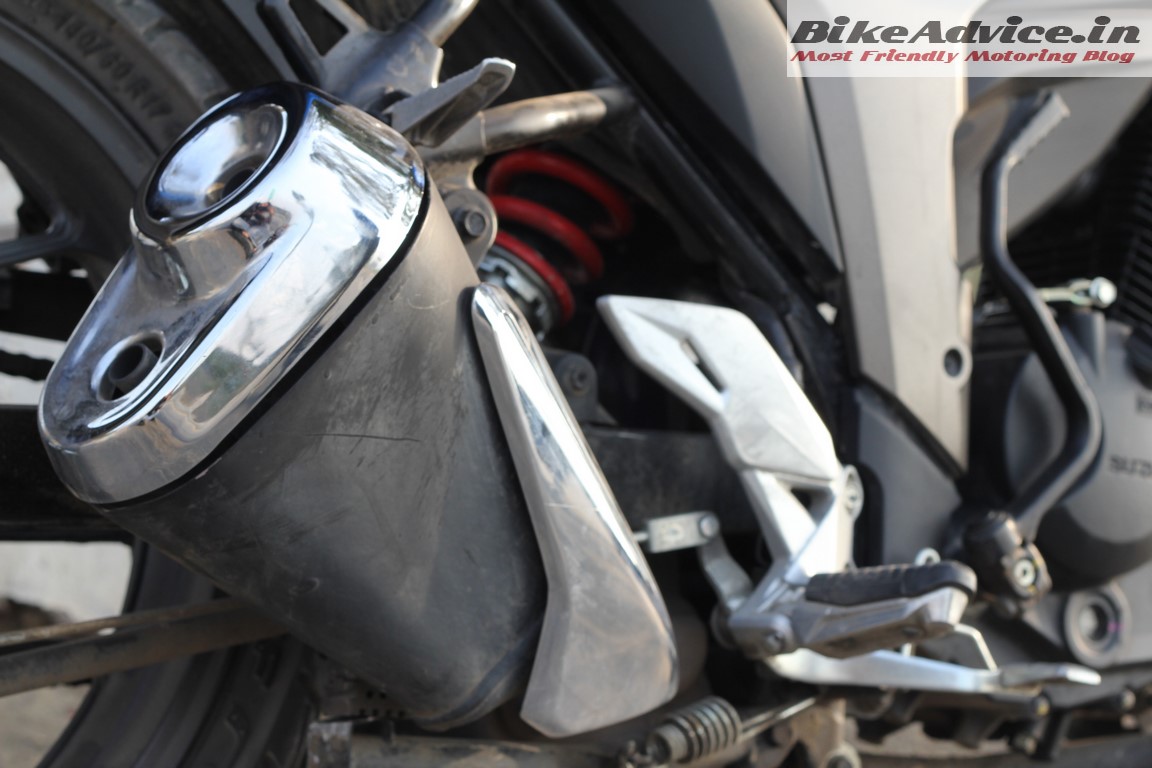 Preload set to the hardest, we went to hunt the same speed humps, and this time we won. Repeatedly. Then I also rode solo with that setting, and loved the taut feel. If it did not bounce with my body weight, it won’t jump around under heavier folks. Strangely enough, the standard tool kit supplied by Suzuki (under the seat) does not come with the preload adjustment wrench. But no worries, almost every second household has an adjustable spanner, which you may use if you have 10 seconds and don’t mind rolling up your sleeves… 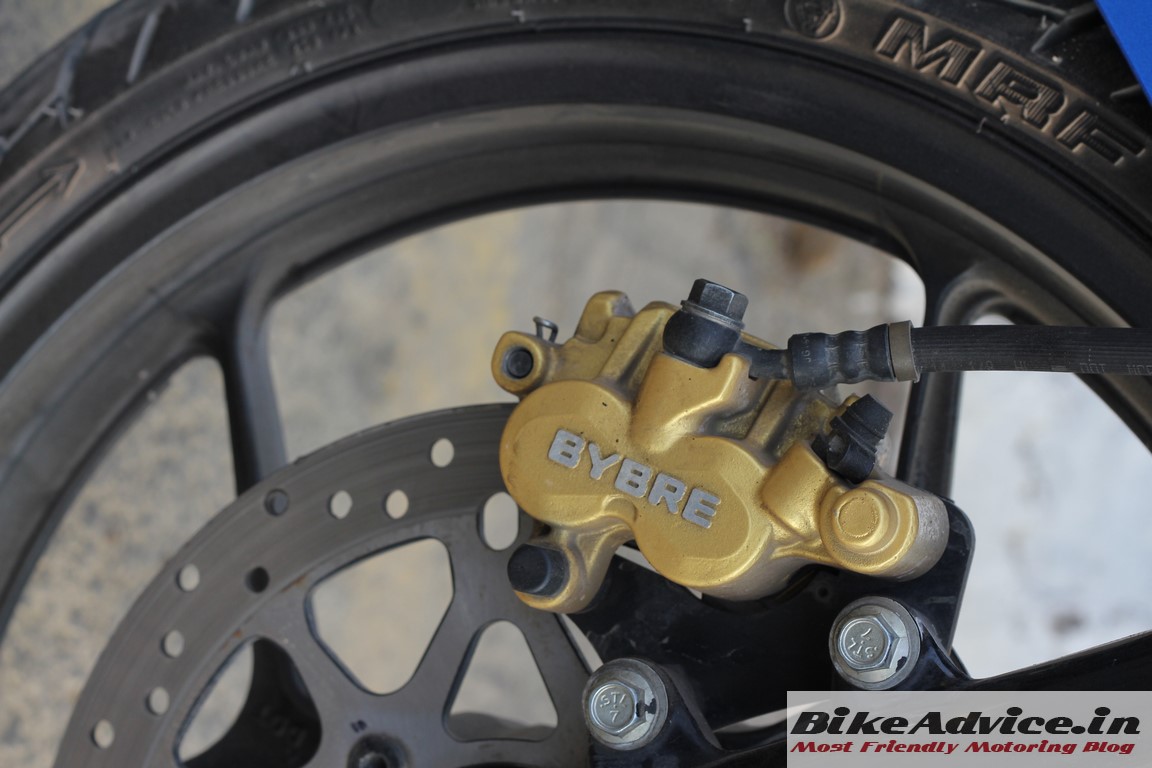 The Gixxer gets a disc brake up front and a drum at the rear with no option for a rear disc available as of now. The front is great both in feel and bite while the rear, though lacking in both comparatively (and obviously), gets the job done at all speeds! The grippy rubber makes the brakes (that rhymed!), especially the rear one, earn brownie points due to the fantastic grip they provide. The MRF Zappers – 100/80 at the front and 140/60 for the rear – performed well on wet roads too!

One of the most important criteria in the 150 cc segment, the fuel efficiency of a motorcycle here can 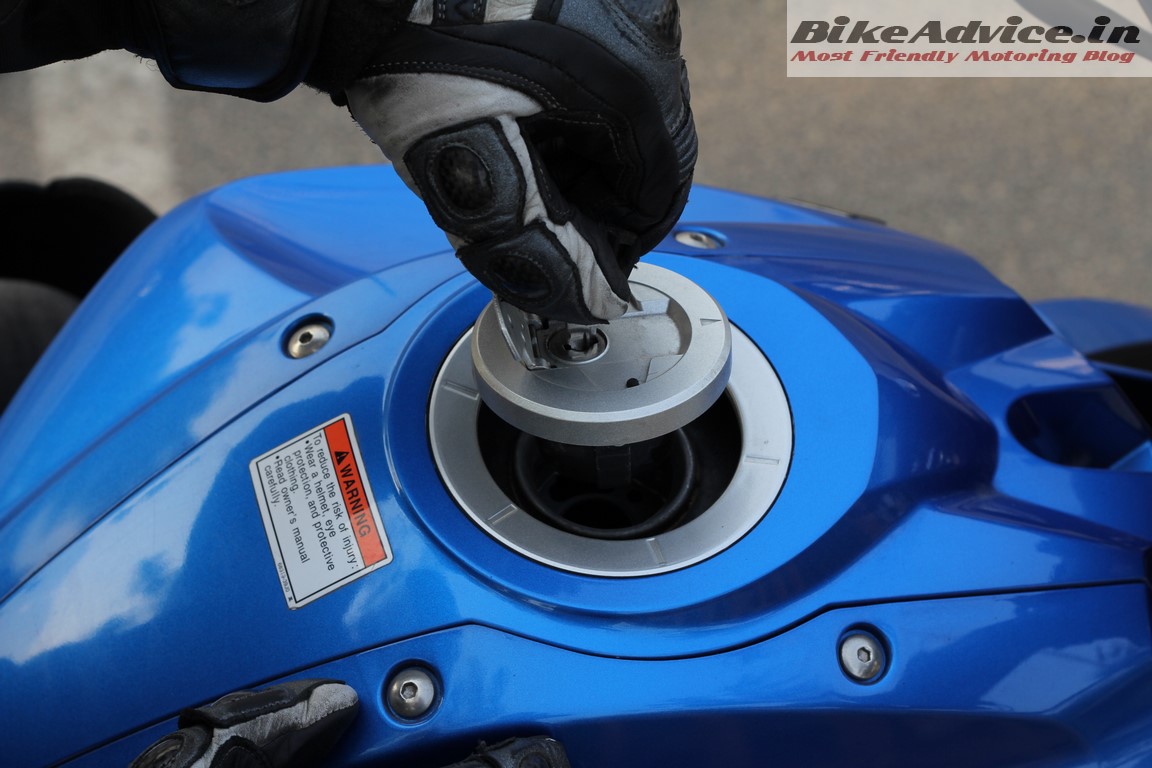 either be a big incentive or a major dampener for a prospective buyer whilst making his decision. I rode the Gixxer like it would be ridden by the majority of its owners – 80 per cent in stop and go traffic, 10 per cent with the throttle pinned to its stop, and the remaining 10 per cent in a relaxed manner. Such riding saw a dot 50 km/l which is fabulous for what is such a fun motorcycle! Ridden carefully, I won’t be surprised if someone tells me they extracted around 10 more kilometres from a litre. A 12-litre fuel-tank means a touring range of 600 km, so with petrol prices hovering around 64 rupees in Delhi a weekend trip to the nearest hill station would cost less than 800 rupees in fuel! I should have one of these… 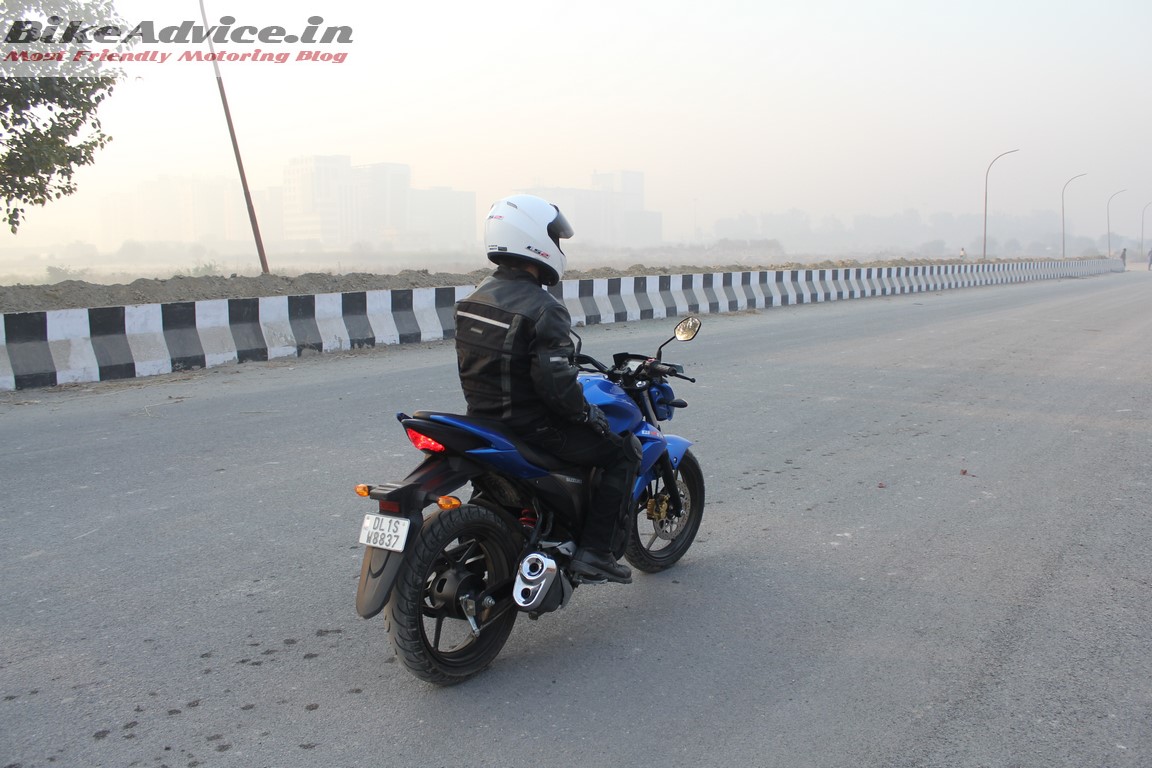 Verdict? You still need one? Here it is then: The Suzuki Gixxer is the BEST motorcycle in the segment, PERIOD. Why? Simply because it is not only the best-looker of the lot, it also does almost all things 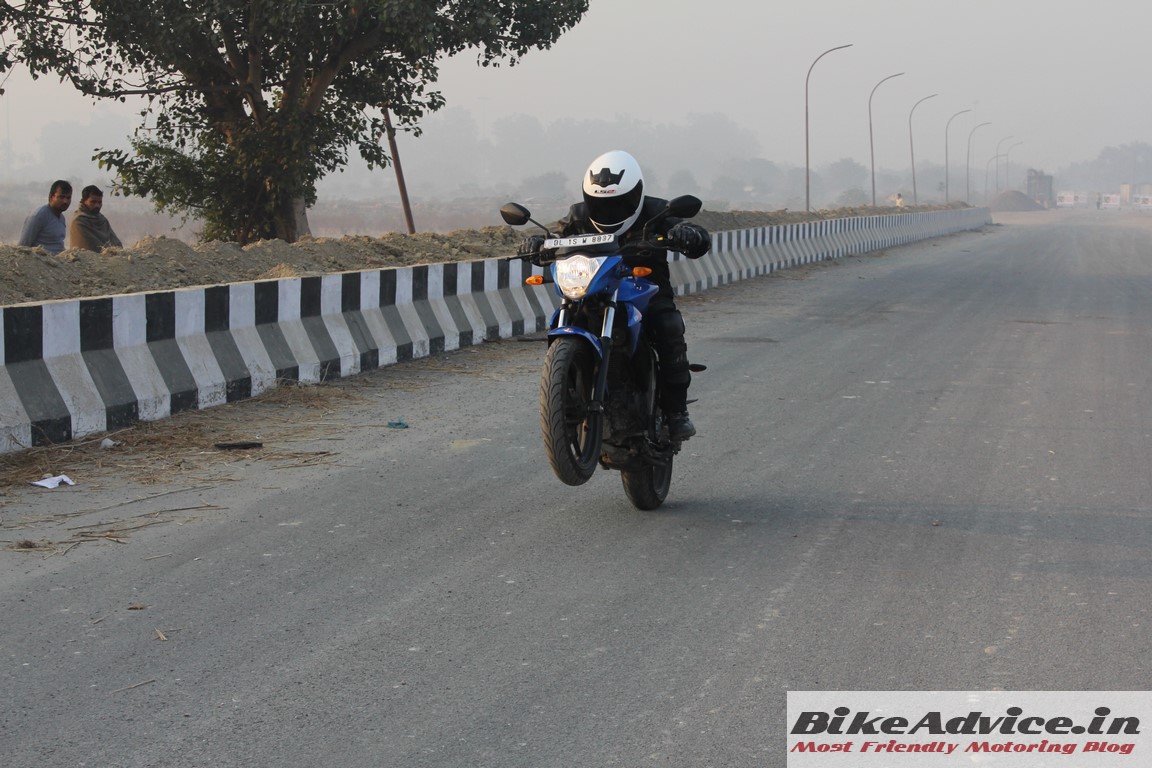 better than every other contender. Okay, let me do a quick recap – it looks beautiful, has the best power-to-weight ratio in the segment, is quite fuel-efficient, handles like a dream both in traffic and out on the highways, is well put together; need more? Its suspension (rear) can be precisely set up if you have the inclination; it has the best instrument console; and again, it looks so darn beautiful!

Still greedy? It’s priced extremely (no pun intended) competitively at INR 79,809 (on-road) in Delhi. That makes it a couple of hundred bucks cheaper than even the old (carb) FZ-16! Just for reference, the new fuel-injected FZs start at INR 85,604 (on-road) in Delhi… 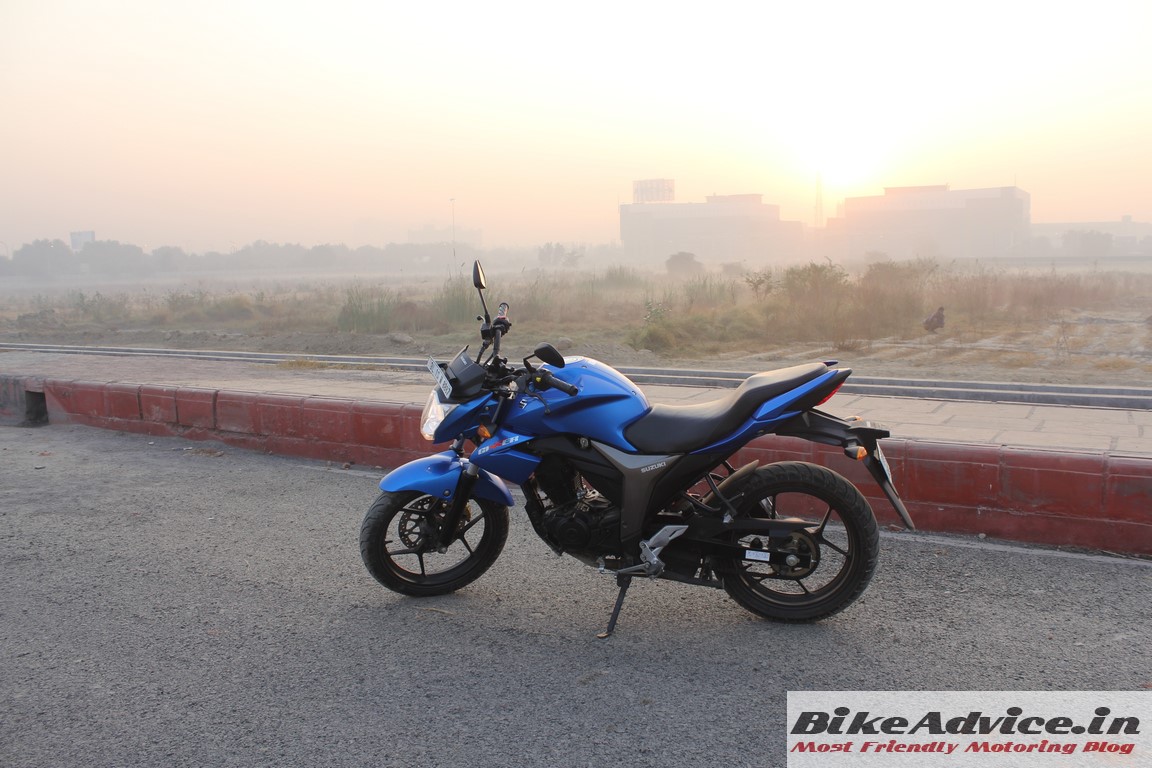 Still can’t make up your mind? You need a therapist then. Okay wait, we are bringing a comparo soon!