While Hero Motocorp, Yamaha and TVS have already rolled out or have revealed updates and Special Editions for their products targeting the festive season, the slow-moving manufacturer of the lot – Suzuki has finally announced something which could bring it to the headlines…

Bollywood’s star Salman Khan’s association with Suzuki Motors will see a new turn with Suzuki joining hands with ‘Being Human’- a Non-Government Organisation (NGO) run by the Bollywood actor.

The endorsement will span a special-edition ‘Being Human’ Access scooter for this festive season and part of the money from sale of each unit will then be donated to Being Human foundation, which is involved in charitable activities like education of the underprivileged, cataract operations, heart surgeries and bone marrow donation camps across the country. 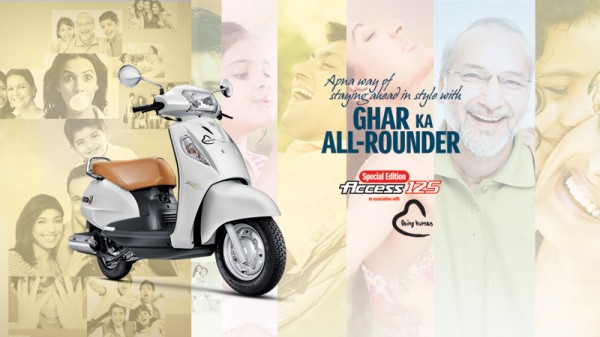 The Special Edition will see fancy cosmetic jobs and will retail at 59,756 INR about Rs 1000 more than a regular Access. The special edition clad in Pearl Mirage White colour will come with the following bells and whistles-

Mechanicals remain the same, with the Access powered by a single-cylinder, air-cooled 124cc engine that is good for 8.5PS of max power and 9.8Nm of peak torque.

Suzuki expects to sell around 40000 units of the special edition as a part of the festive season sales. The endorsement of Suzuki with Being Human foundation will see over 300 dealers act as outlets for Being Human apparel and merchandise. The merchandise initiative is expected for a turnover of 3 Crores.

Suzuki’s idea to sell scooters and at the same time add value to a very good cause deserves appreciation.