Many bikers don’t know the difference between production super bikes and MotoGP versions because of which they always have a same kind of image in their mind for these two completely different bike species. Others, who know this difference, give explanation for GP bikes as more performance oriented machines than super bikes. They are very right, but they don’t know the exact importance of “performance”. 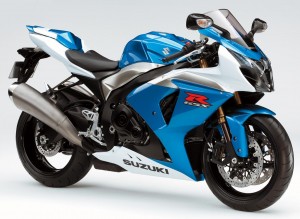 This “performance” includes acceleration, speed and retardation, nothing else. Every effort made in GP bike is just to increase and maintain these three parameters. Each crew tries to have greatest acceleration, sufficient retardation and greatest speed on track. They do many alteration and exploration to generate the difference; difference from other crews and production bikes. These dissimilarities exist right the way through their designing, manufacturing, assembling and testing.

It is but obvious that very first difference exists in the power producing heart of these two bikes. As a whole, both these bikes make use of high capacity powerful engines. But MotoGP bike incorporates much lightweight engine which produces more power than a production super bike.

Designers always try to decrease weight of the engine as much as possible which results as a use of V-Twins or V-fours in MotoGP instead of multi cylinder inline used in production super bikes. This V produces 20%-30% more power than a multi cylinder inline engine, even with less capacity. Power output can reach up to 200 HP. 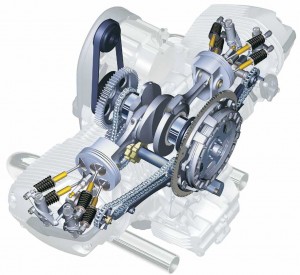 Each and every part in the engine of MotoGP bike gets a special considerations and treatments from designers. Much lighter alloy castings have been used instead of common aluminium alloy casting to match up with weight requirements. Steel parts get replaced by much lighter titanium parts. Many GP bikes also make use of carbon fibre parts in engine as a solution of weight reduction.

Production cost for GP engines also stays higher than a production bike engines. Production bike parts got benefited by their quantity and interchange ability where GP bike parts are specially produced with more precise methods and without any liberation. This results in more production cost, no space for any supposition and no room for any blunder. 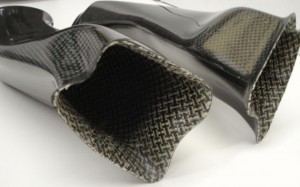 Air ducting in both types of bikes plays   imperative responsibility in deciding bike’s performance. After all, it is the only means by which bike engine breaths sufficiently and efficiently. GP bike slots in a straight and simplest ducting to provide adequate amount of fresh air and helps to increase volumetric efficiency. While in super bikes, ducting is done to provide good elucidation for aesthetic requirements also.

Throttle response in GP bike remains much more advanced with respect to butterfly opening position. Just a small twist of accelerator can open the butterfly wide which amplifies bike’s acceleration tremendously. This also helps to avoid more twisting of rider’s wrist and reduces his fatigue. No doubt, super bikes also come along with throttle response mechanism but stay slightly less responsive than a GP bikes.

This is one of my favourite parts fitted on GP bikes. Free flow exhaust tune has always attracted me a lot and I am also using it as my SMS ringtone. Simplest but highly engineered and precisely manufactured exhaust contributes a lot to gain and retain desired performance by 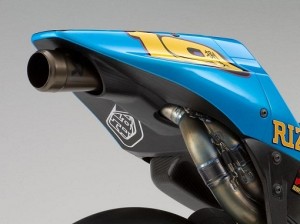 increasing scavenging efficiency of the engine. Though it is a free flow exhaust, sensors are integrated in the system to read out the amount of gas temperature, oxygen and carbon dioxide. This data is used to increase power output as per requirements. This is done with the help of with the help of ECU and other electronics.

Super bikes don’t come with tuned exhaust. We are required to install tuned exhaust if want to generate that performance melody. Emission norms also need to be fulfilled in super bikes as they are also used on normal roads.

Most of the GP as well as super bikes employ slipper type clutch. We can consider it as a multi plate clutch which allows driver to avoid clutching at the time of cornering. It also assists to shift up or down within a small fraction of time. You can refer “Knowledge base” section for more details about slipper type clutch. Here again, difference exists in materials used to manufacture this clutch. GP clutches remain 10%-15% lighter than super bike clutches and can transmit 20%-25% more power. 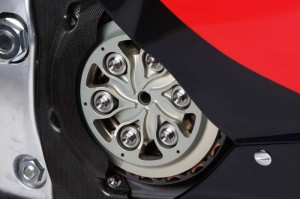 Transmission box always acts as a deciding factor for bike’s acceleration. No one can have greatest acceleration even with high speed engine if transmission chosen is erroneous. In GP world, acceleration of the bike is only deciding factor of victory. Each crew tries hard to have accurate gear box that provides highest acceleration and also helps to save time during shifting up or down. Zeroshift and Xtrac are the best examples of optimized gear box for GP bikes.  Zeroshift incorporates constant mesh gear box with newly designed tab locks instead of dogs allowing rider to shift the gear without killing time as well as power. Super bikes use sequential gear box in which few of the gears are used as dogs also. This arrangement always disconnects the power from rear wheel while shifting up or down. It is not at all desirable, adaptable and acceptable in GP world because of which they spend too much for gear box designing.

Frame is the second part on which designers always concentrate to have much possible weight reduction. Many types of frames have been used in GP world which include aluminium frames consisting mixture of cast, extruded and forged pieces. Pipe frames are also incorporated along with engine based frames. Nowadays, designers are inclined toward carbon fibre chassis which offers greatest weight reduction with enough stiffness.

Carbon discs are now almost universally used on GP bikes which offer less expansion under heating and greater heat dissipation. These discs also serve the purpose of weight reduction considerably. Nowadays, ABS is now essential in super bikes as they are also used on normal roads and controlling high speed becomes easier with ABS. ABS seems worthless in GP bikes as braking is not frequent operation during and on race track but brakes are efficient enough to stop the bike from 200+ kmph speed. 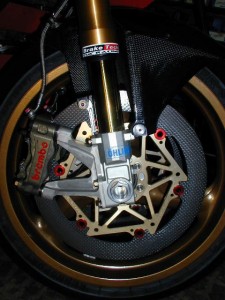 Just like braking, road cavities are also remains at negligible level on GP tracks.  At the same time, at the time of acceleration, weight transfer from front to rear needs to be evaded. Suspension has to absorb various forces at the time of turning. For these reasons, rear suspension of GP bike kept little stiffer than a production super bike. Same situations are also applicable to front suspensions. As a result, Yamaha uses two different damping characteristics for two front forks. One fork is used to damp elongation and other fork is used to damp compression. This helps to customize the design of springs and damping valves which serves much well than a normal suspension does.

Production super bikes also use damping control devices to avoid any disaster. Additional components are also favourable as weight has not that much of importance in super bikes.

Both the bikes have a feature of seamless forged wheels which are much lighter than a normal alloy wheels. GP bike wheels hang about 30%-35% lighter than super bike wheels because of magnesium alloy, carbon fibre and composite materials which are nowadays added to GP wheels to diminish more weight. 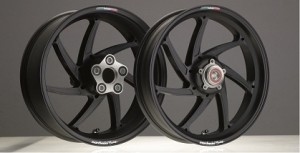 Most of the GP races are kept dry and so as the tyres. Plane tyres (without any treads) are used for efficient gripping and to generate ample contact area. Bridgestone is the only certified and approved company which can supply tyres for MotoGP races.  No doubt, crew can ask for different designing, manufacturing and composition of tyres according to demanding requirements.  Past consequences, current conditions and rider’s feedback are used as core requirements to design GP bike tyres. Upper most layer of the tyre is kept softer than normal tyre. This softer layer gets heated on burning and provides excellent gripping. Life and efficiency of this GP tyre is decided with respect to number of laps. It becomes obligatory for driver as well as crew to change bike tyres after pre-defined laps. Auxiliary brake discs and chain sprocket are kept assembled into the standby wheel-tyre assembly to save precious lap time. Pit crew has to change this assembled wheel within few seconds.

In the case of super bikes, life and efficiency of tyres are decided with respect to kilometres. Like, it is essential to change Hayabusa tyre after 5000 kms. Super bike also uses heavy duty tyres which can withstand tremendous stresses at the time of delivering high power. But core construction and composition differs a lot in both bikes.

Fairing is very obvious requirement for these two bikes. Basic difference exists in material and construction. GP fairing contains smooth and simple structure without complicated curves. While super bike fairing is designed to serve the purpose of aesthetic and contains lots of lines and curves. Smooth and simple fairing of GP bike restricts the formation of V notches and eddy currents. The only material used for GP bike fairing is carbon fibre whereas super bike uses heavy duty FRP. Different colour schemes are also used on super bikes to make them attractive. GP bikes also have dazzling colours but mostly remain cover with sponsor’s logos.

Today, each bike uses electronics either as system controller or as a component of any system. Electronics has helped designers to get rid of from many bulky mechanical parts and also serves efficiently without any chance of error. Both these bikes make use of advanced electronics to control engine power and riding quality. The only difference is, performance data of engine as well as of bike are visible to the crew on their computer screens. I don’t know how they do this but it really seems advance.

This is all I know about MotoGP and super bikes. Please share your knowledge about said differences if anything left untouched.