Many old Karizmas and Pulsars are roaming on the road of Ahmedabad with modified engine compartment. Three of my students had performed their project on the similar topic to expose major negative aspects of these modifications. I am sure that you all will also be in opposition to these modifications after completing this article. We can consider this as a process of converting our machines into heat generating and fuel spoiling furnaces. 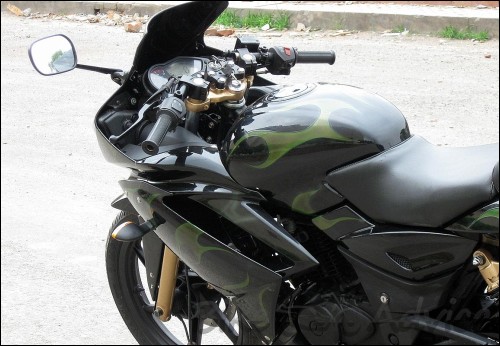 Majority riders always remain lean towards sport bikes. Many of them got satisfied by purchasing small scales like R15, ZMR and up to Ninja also. But those who cannot afford these big price tags move towards somewhat cheaper way of modifications. These modifications include front fairings, headlight alteration, tank shape modification, rear panel alteration, tail light and finally big heavy wheels and tyres. Some modifiers are so capable that they always remain ready to convert your bike into Hayabusa or R1. We can define it as a first step towards biggest error of rider who wants to ride a sport bike.

Modifications should improve something at the expense of nothing. But exactly reverse, these modifications always increase ostensible looks of bike at the expense of fuel efficiency, engine life, and riding quality. My students had considered only engine compartment modification because in most of the cases, major troubles crop up in the engine related parameters only. Let’s look at them. 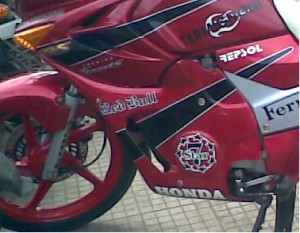 This photo demonstrates us a modified Karizma, particularly its engine compartment. Nothing is visible apart from gear lever. Without considering any engineering terms, any normal person can also predict some of the drawbacks here. There is no space available to operate the fuel valve which indicates that the bike always runs with “Reserve” position of valve. No room is available to repair carburetor if something goes wrong. Worker has to remove this fairing every time to change engine oil. Obviously weight increased at least of 1 kgs with this fairing because it is not a standard light weight FRP material provided by companies.

Another example is the modifications done with Pulsar shown in this photo. Aesthetically, this is the best modifications I have ever seen in any Indian bike. Distance between fairing and front tyre is also sufficient. Enough space is also available with this company made R15’s fairing fitted on Pulsar. Weight should be also less if compared to above said handmade fairing. So what’s the problem now? Let’s discuss it. 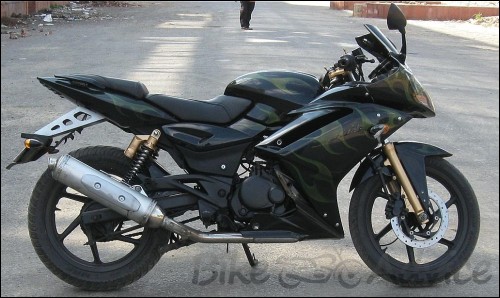 Main problem occurs with the cooling system of engine. Any cooling system contains other two sub systems called heat source and heat sink. Here, engine itself works as a heat source which generates tremendous amount of heat during working. Because of many limitations and to sustain efficient working, this heat must be dissipated from the engine. For that, we required another system which contains lower amount of heat than the engine has. This system is known as heat sink where engine has to dissipate its heat.

Now the requirement is for appropriate heat sink. It should be available continuously. It should be cheapest and easiest system that could be incorporated as heat sink. Air medium has been used as a heat sink from the very first generation of engines and still doing well in most of the cases. Mostly in single cylinder engines, surrounding air serves perfect medium for heat dissipation. In moving condition of vehicle, efficiency of this system further increases due to continuous flow of air. Air medium is efficient but not sufficient in the case of multi cylinder engines where power and thus heat generation is much more than a single cylinder engines. So in that case, designers are using liquid cooling as an answer. This liquid could be either water or oil. In some cases, particular chemical (generally known as refrigerants) also been used for better and quick temperature changing characteristics.

So as a conclusion, we are having two types of cooling system for bikes: Air cooling and Liquid cooling. We shall omit the liquid cooling here, as we are talking about bikes which are having air cooling system. It seems very easy in the very first instant that air flows and cools the engine incessantly. But it really requires very precise and hardcore engineering behind it.

There are basic three types of mechanisms by which the engine heat is transferred to the air medium. These are conduction, convection and radiation. Out of these three, most of the heat transfer takes place because of conduction, nearer to 70% of total heat transferred. Conduction can only takes place when two bodies with different temperature come into direct contact with each other. Same circumstances happen when air flows around the engine. Cooling fins are provided on the engine block to increase the contact area between flowing air and hot cylinder walls. This helps to increase the heat dissipation and improves the cooling rate. Fins also act as ducts, generate paths and provide guide ways for flowing air. So the designing of air cooling system requires detail knowledge of heat transfer, mass transfer and gas dynamics.

Now when any extra fairing is attached to the engine compartment, it obstructs the path of flowing air. As air is a compressible fluid and has minimum viscosity, it enters in to the engine compartment through front passage and small gaps of fairing. So our first objective of providing heat sink got completed. Now heat transfer takes place between engine walls and supplied air. Temperature of air increases due to this heat transfer. This hot air must be replaced quickly by fresh cold air to maintain the engine temperature as well as its cooling rate.

Obviously, modifiers are not considering any aerodynamics and gas dynamics while designing fairings. They just assemble it to the frame and wrap the engine totally. Coming back to the point, hot air remains trapped between fairing and cylinder fins because fairing also provides blockage to the outlet passage. Main problem arises at this instant. Intake rate of fresh air is not sufficient because of obstruction due to fairing and outlet rate is also diminished by the same fairing. As a result, temperature of engine compartment increases drastically within short instant and engine runs at higher temperature. This high temperature causes many problems within the engine itself, which my students had proved in their project. 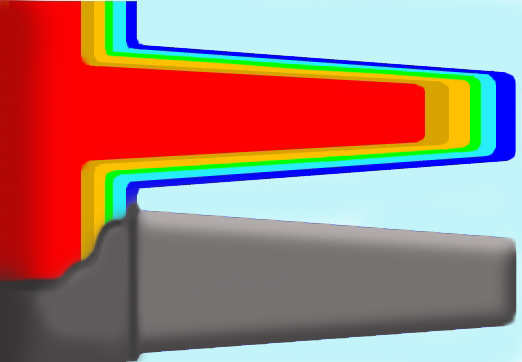 Above diagram shows us the analysis of two cylinder fins. Red colour indicates the highest temperature region and blue colour indicates lowest temperature region. The red region is cylinder side from where the heat is generated and transferred toward extended fins. The blue region indicates the surface area from where heat is thrown to the air medium. Fins are kept trapezoidal in shape to increase this blue region. Above diagram is for engine that runs normally without any modifications. 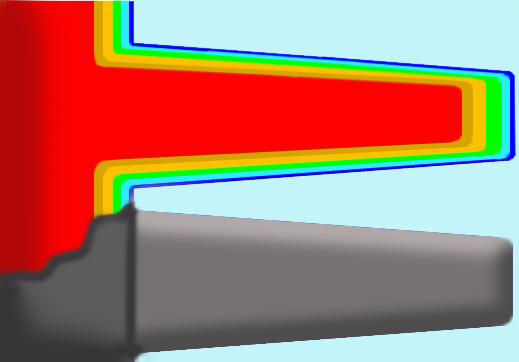 Above diagram shows us the same circumstances but the engine is now covered with modified fairings. It is easily visible that the red colour region in this case has increased considerably. This indicates drastic increase in working temperature of engine. Blue region is almost got eliminated from the contact area and replaced with green region. It also point towards increased temperature of surrounding air.

Fuel consumption in the case of modified bike was increased by 13% (after continuous run of 2 hrs.). That means, if your bike gives you a mileage of 40 kmpl, it will diminish to 34.8 kmpl after modification. This drastic increase in fuel consumption is just because of higher working temperature. Higher working temperature promotes knocking and detonation which are the most undesirable effects during combustion. It spoils the energy released from combustion of fuel. That is why engine requires more fuel to generate enough power output.

These are some of the negative aspects of engine compartment modification. I hope, you all now do agree with me to avoid these modifications. Also spread these points among your friends who want to heave their bikes out of above said problems. Put down your valuable comments.