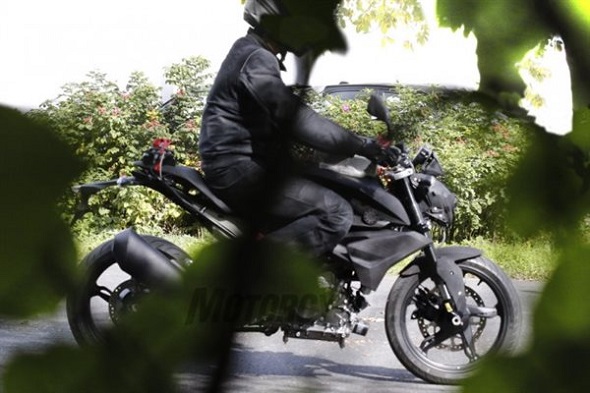 Towards the end of last month, spy pics of what is purported to be the first motorcycle from TVS-BMW Joint Venture, emerged on the interweb and according to an import data, it is codenamed as K03!

Another spyshot of the same test mule has been snapped and shared by Motorcycle.com which showcases the side profile of the bike and had this been India, people could have easily mistaken it as the updated Pulsar 200NS (with some more muscle)!

This K03 test mule doesn’t carry all the body parts and there is the presence of a huge exhaust, disc brakes upfront and at the rear (possibly petal-shaped), low-profile wide tyres, tank extensions and some test equipment which is strapped to the pillion seat. There is an additional circular mounting very close to the rider’s knees which may be for the BMW’s logo.

There definitely seems to be a Duke inspiration upon first glimpse and the riding posture is nice and upright. Though there has been no confirmation on this, but K03 will be powered by a new engine which is expected to be around 300 cc in displacement.

Recent updates tell us that K03 is being developed in Germany by BMW and there will definitely be TVS inputs somewhere in design and the complete development. Though there are a lot of differences, but there is a definite inspiration from the Draken concept TVS showcased at the Auto Expo in 2014.

Official unveiling of this motorcycle may be done by BMW at 2015 EICMA!