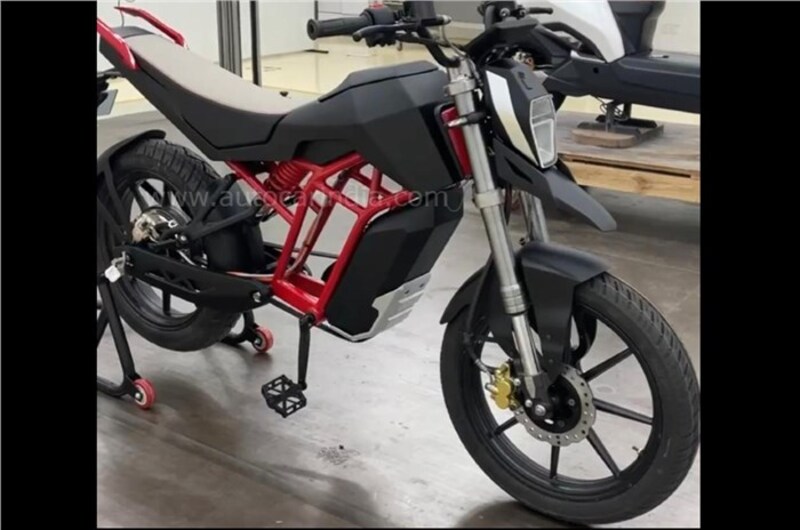 LML Leaked Electric bike is a quirky motorcycle-moped hybrid with a compact supermoto design and pedals on it!!…

So, thanks to an online portal, some images have come to the surface which suggest that the electric bike in the picture is LML’s upcoming electric two-wheeler – that too with pedals!?

The bike captured in the image is void of any branding whatsoever. It is completely pained in Black, accented by a candy Red painted frame and rear grab-handles. The bash-plate and the front telescopic shocks are painted in industrial Silver colour. Other than the paint, the bike has no name, brand, or technology name, not a single alphabet on it.

Is this truly an electric bike through which once famous brand, LML, are going to make their debut with?? Or is this just a prototype machine??

Looking at the bike, the most peculiar and out-of-place feature of the electric bike is the addition of foot pedals, like the ones found on many old mopeds (remember Hero Puch??). Other than the pedals, the rest of the electric bike sports the fundamental design of a small displacement motorcycle.

It is built around a bright Red coloured trellis frame, to which connected are Silver colour finished conventional telescopic forks combined with a Red coloured monoshock connected to a small swingarm. This combination results in an electric bike with a compact & utilitarian design.

At the front of the Trellis Frame is tucked a small box within which the batteries will be stored for the electric propulsion system. This section is protected by an Aluminium bash-plate extending all the way under the Red frame.

Other features include an LED headlight unit, a small beak fender right above the conventional tyre fender, a disc brake setup at the front & rear, the pedals (of course), a flat seat and a conventional tail section. At the front where the seat meets the frame, a traditional fuel tank design storage space has been added with a lid visible, to facilitate easy access to this storage space.

Well, we don’t have to wait much longer to see the first offerings from the revived LML brand. It is expected that LML will unveil its electric offerings on September 29, i.e., just 2 days away.

Will this petite motorcycle-moped hybrid make its debut on that day???

Only way to find out is to wait 2 more days…