Worried about the petrol price hike? Here is an eco-friendly solar bike which will provide relief. Two entrepreneurs made a bike which runs solely on solar power. They will soon apply for the patent of the solar bike. 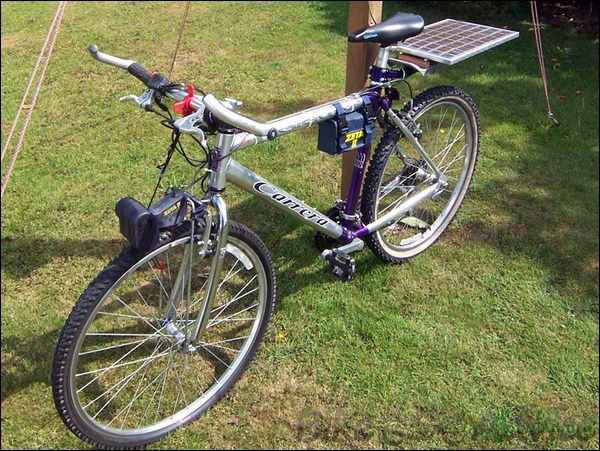 Ayubkhan Pathan and his nephew, Imran Pathan, owners of Alright Electronics and Electricals, made the solar bike out of an old bike in three months. A solar panel is attached to the front of the bike with the help of which the battery attached to the bike is charged. Once fully charged in the sun, which automatically happens even when the rider is travelling in the sun, the bike can cover up to 250 km in bright sunlight at speeds of up to 50 km per hour. The battery supply is automatically discontinued when the battery  is charged. The bike starts with a switch: it does not need a kick or a starter, said Ayubkhan, who hails from a farmer’s family from Malwad village in Shrirampur taluka of Ahmednagar district. After completing his graduation in science in 1988, he started Alright Electronics and Electricals in Pune in 1990.

He has earlier made solar emergency lamps, solar inverter and other solar equipment. The uncle-nephew duo has set up a huge solar emergency lamp at Shrimant Dagdusheth Halwai Ganesh temple in the city and at the dargah of Hazrat Kamar Ali Durvesh, at Khed Shivapur, which Ayubkhan claims is the largest in the world.

“The bike also has a battery back-up as people may also travel at night,’’ said Ayubkhan. The bike has a multipurpose socket, so that the battery can be charged with an electronic supply charger during the monsoon, when there is little or no sunlight.
“It costs Rs27,000, but the cost might come down to Rs16,000 if produced on a large scale,’’ said Ayubkhan. The duo will be applying for the patent of the bike and also plan to make some changes in the prototype model.

“The panel is attached in front of the bike. We may have a smaller size panel which can be placed in the body. It will also have LED headlight, a turn indicator and a break indicator. The weight of the bike can be further reduced by up to 30 kg. That will mean better mileage,” said Ayubkhan about the modifications.

He says if solar battery charger pumps are set up after every 50 km, it would motivate people to use such bikes on a large scale.

Disclaimer : The image shown here is just to show how a solar bike would look like and is no way connected with the project mentioned here