Royal Enfield is a brand that most of the hardcore bikers prefer and crave for. For them, if its a motorcycle it has to be nothing other than the Royal Enfield. This brand became more famous in the Indian soil amidst the biker community by organizing few of the planned TRIPS across few of the best places in the country. 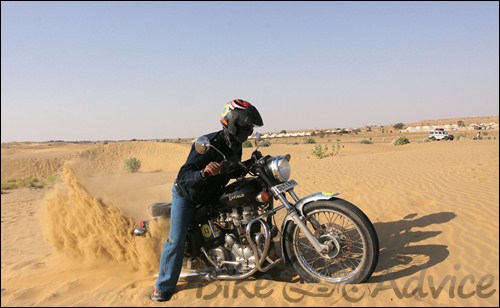 Keeping in line with the tradition of promoting leisure and adventure motorcycling culture across the country, Royal Enfield brings the Tour of Rajasthan 2011, a ‘trip’ of adventure riding across the sands of the Thar desert and some of the best Tarmac in the country. For sure, riding a RE motorcycle along the desert trail would indeed be great fun and an awesome experience as well.

The Tour of Rajasthan is 10 day ride that will take the riders through the largest state in the Republic of India, which is Rajasthan. On the riding front, Rajasthan has the most spectacularly laid stretches of Road and there is no dearth of Off-road and sand tracks either. Although, Rajasthan is primarily known as the desert state it has its fair share of hills and the Aravali mountain range which makes this state a best choice for organizing the trip.

The Tour of Rajasthan will begin from Jaipur, which is the pink city, then traversing through Mahansar, Bikaner, the sand dunes of Jamba, Jaisalmer, Sam, Jodhpur, Kumbalgarh, Ajmer/Pushkar and finally converging back to Jaipur. The ride will be carried on all kinds of terrain ranging from brilliant tarmac, gravel, off-road and sand.

What you see below is the brief itinerary of the entire trip.

Most people travel from Jaisalmer to Sam via the direct route which is a mere 40kms, but in this ride a detour to the famous Tanot Mata Temple will be taken. This is the Temple on the Border Security Force (BSF) post in Tanot and legend has it that during the 1971 Indo-Pak war all shells that were dropped in the Temple never really exploded. From there on the ride will be proceeded along the Border route of Tanot – Longewala where the famous 1971 war was fought. The Riders on the Tour of Rajasthan 2009 and 2010 had the opportunity of seeing the captured Pakistani tank from the war in person at the post in Longewala. Another highlight of the ride is the Bullet Baba Temple, a temple dedicated to the Royal Enfield Bullet itself. This is right on the National Highway to Jodhpur and has Hoards of people at all times. 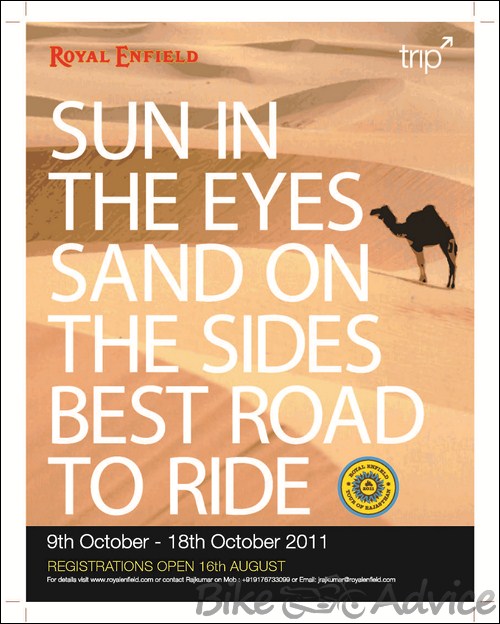 The Registrations of the Royal Enfield Tour of Rajasthan 2011 have opened. This will be on first come first serve basis and the registration cost is INR 16,000. Riders who are interesting in participating will have to keep in mind that the maximum number of Registered Riders for the Tour will be 30.

Accommodation on twin sharing, bed and breakfast basis will be provided to every rider throughout the trip. There will also be a camping on the sand dunes in Jamba and Jodhpur and staying in a heritage castle in Mahansar- just some more attractions on the Tour. Please note that pillions are not allowed on this ride and each rider will have to bring his own bike- the primary eligibility criteria is that you need to be owner of Royal Enfield Motorcycle. The cost of Petrol and other meals will be borne by each rider. However in camps and smaller towns, dinner will also be taken care of. A small team of Mechanics with some basic spares will provide service support on the tour. A team doctor will be with the riders for the duration of the ride as well.

That sounds great and to remind you again, the registration is limited  to the first 30 riders only. So all those readers who are interested hurry up!