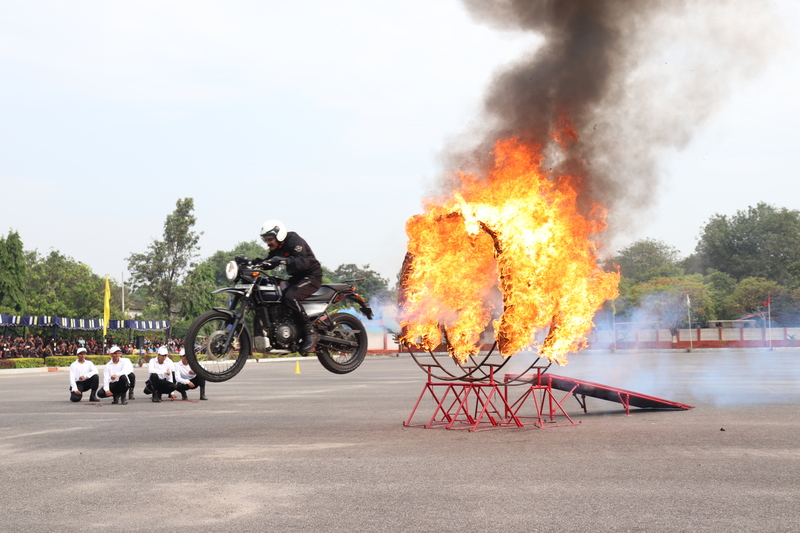 So, Royal Enfield have been in association with the Indian Army since 1952, when they first started supplying motorcycles for the armed forces.

And to celebrate this 70-years of association, the company have inaugurated  a special commemorative sculpture – ‘Tornado Wall’ – on 7th of May, in the Center of Bengaluru city.

As mentioned earlier, on 7th of May, Royal Enfield, in presence of many Indian Army high-ranking officers, unveiled the ‘Tornado Wall’ as a ‘mark of respect to the unrelenting valor and bravery of the soldiers of the Indian Army’.

The inauguration was attended by Lt. Gen. MKS Yadav (SM, DGST) and Mr. Jayapradeep V, (Head-Business Markets, India+, Royal Enfield). The event was also attended by Mr Tejender Singh Baoni who is the sculptor of this commemorative monument.

Furthermore, as a tribute to ‘the undying spirit of the Tornadoes team of the armed forces’ – RE have also designed and launched the ‘Tornadoes Collection’. They shared that this limited edition apparel collection is inspired by the valor, pride, patriotism of the fellow riders.

Firstly, the Tornadoes Collection includes a special range of protective apparel especially designed and available for the Army Service Corps (ASC) team, so that they perform their stunts safely.  Secondly, RE have launched a range of graphic t-shirts, full sleeve t-shirts, sweatshirts, shirts, jackets, trousers, caps, headgear and mugs for those who aspire to associate with Tornadoes and their brand.

The collection for the general public is priced between Rs. 350/- and goes as high as Rs. 5900/-. The Tornadoes Collection is available at all leading Royal Enfield stores, Shoppers Stop, Central & Globus stores across India. It can also be bought online on Royal Enfield official store and Amazon.com.