What makes you think of owning a Royal Enfield machine? Answer should be one among these – Macho looks, Tremendous Power or the need for a proper cruiser bike capable of covering long distances along the open highways. Now, there are even more fantastic products coming out from their stable. I did not mean the ThunderBird500, but I refer to their riding gears which they displayed ain their stall at the Auto Expo 2012. 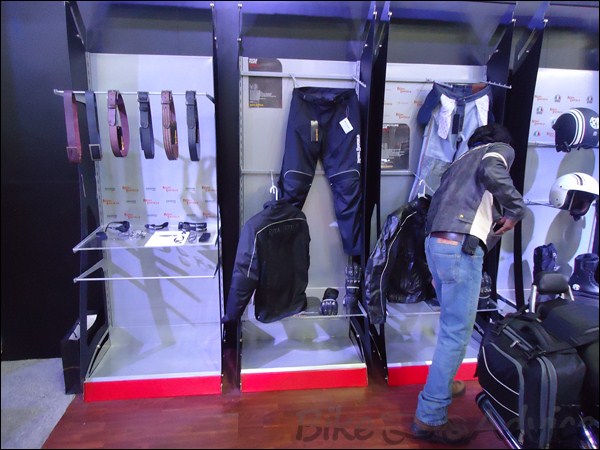 This post will take you through the gears along with their images which were put on display. It’s high time you give a sense of relaxation for your eyes and the best way for that is to take a look at the images out here.

There were stuff like exclusive RE all – weather riding jacket, detachable spectacles which could be used as a riding glass, can also be connected with a band around your head and the best part is that regular spectacle lenses can also be added onto it. There was also denim jeans from Royal Enfield kept on display. If you ever wanna unleash the true biker within you who is very dormant, this is what exactly you need to shed your bucks on. The riding boots were well designed to grasp the attention of everyone. Gloves were also a part of the displayed stuff.

But, for me the best gear from them is their helmet range. Designed to match almost every colour of the RE bikes, they were a sheer lend of classiness combined with the present day trend.  The helmets featured the text ‘MLG’ on the top of them which simply means ‘Made Like Gun’ which is what all Royal Enfield bikes are known for and what they are as well.