I have purchased the limited edition Royal Enfield Machismo 500 in August 09. Till now I have done 6000 kms on it. It is my second bike after Bajaj Avenger 180. This bike is just awesome. The first ride I took of my bike was enough to make me fall for it. 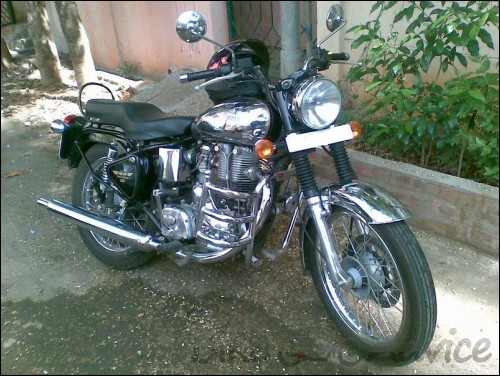 Performance (9/10): Well What can I say about performance the Bullets have been known for performance add to the new improved Lean Burn (AVL) over bored engine & you have a winner in your hand. The torque is just just too much it just pulls like a tractor on roads.

You can really feel the difference when you it climbs on bridge or you drive on a hilly road it just runs like a tiger eating up the miles! Machismo is the heaviest bike from Royal Enfield stable till now which makes it very stable on roads, coupled with 19inch rims makes it a good off roader. This bike can easily cross 80 mark it wasn’t until I noticed my speedo.

Mileage (7/10): Mileage is the last thing one can except from a Bullet. But this bike not lets it down. The mileage on city (New Delhi) is 34kmpl & 39kmpl on highway. Very good for a 500cc bike.

Style & Looks (9/10): The styling has been retro from every end. This bike looks like a chromed monster. With most of the chromed body. Tank, Front Mud guard, Spoke wheels, Silencer. Two colors are available Black & Green. Although black suited me most with chrome for me. It will definitely make heads turn. Although the windshield looks good but it affects performance by increasing air friction.

Handling (8/10): The bike is heavy so to ride it in a traffic is little frustrating. The clutch is very hard which makes it very hard on traffic congested roads. Although highway riding is on par. The riding position is relaxed like traditional Bullets for long drives but not very good for cornering but who needs a Bullet for cornering. The bike comes with inverted gas filled shocks making it very smooth on uneven roads.

The front disk is excellent to bring this mammoth to a stop but rear is a big let down. They vibrations are too much but that can’t be a deciding factor while buying this bike. The traditional instrument panel is present. The traditional thump is missing but a custom silencer can be used to get some acceptable levels thump.

The bike would have been much better if it had: Single key operation for Ignition & Handle locking. A RPM meter & fuel gauge. Front tyre is the traditional ribbed one which doesn’t give much confidence on wet roads (MRF Nylogrip would be much better). A little thick & tube less tyre.

Overall (8/10): If you want performance without much maintenance unlike previous versions of Bullet go for it.