When I was growing up in Chennai, I always aspired for the next level of biking. As a wee lad in kindergarten riding trikes, I aspired for a bike. Then from a 14” junior bike to a grown up 20” BSA. Then came “bikes with engines”. So cool, especially if you were a teenager in the late eighties as the 100 cc exploded in India. Ind-Suzuki’s 100 CC, KB100 (remember the cool cheetah ad), Hero Honda CD 100 and off course the ultimate Yamaha’s RX 100 (still a favorite two decades later). 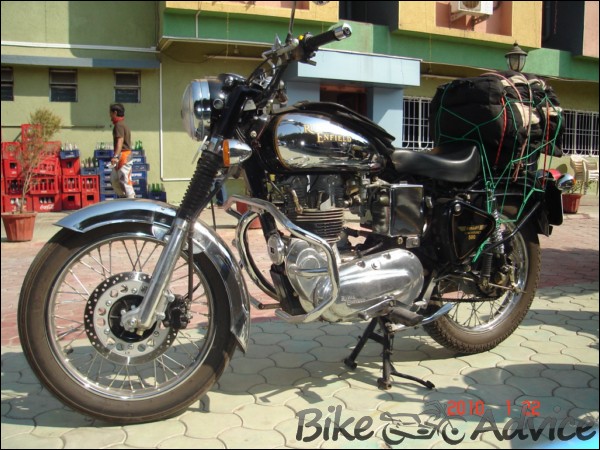 But lurking around for more than 5 decades then (more than 7 decades today) as the ultimate riding machine was the Royal Enfield Bullet Classic 350. It was awe inspiring to see it thump by you on the road. The rider assumed a god like aura. Some one riding a Bullet should not be messed with. I spent some good trips on a friend’s bullet during my college days. But I could never adjust to the gear level and the brake pedals on the wrong side (or the right side for a classic bullet-eer).

When I moved to the US I had the chance to ride some of the biggest bikes I could lay my hands on. Harleys, Victories, Triumphs, and some of the Japanese made cruisers and I enjoyed all of them. But some thing was missing. Then I had the chance to ride a RE Classic Bullet EFI 500 in April 2009. The old memories came back and my resolve to get back on the bike and ride again surfaced.

Shortly after this I re-located to Chennai and I found myself in the Royal Enfield’s showroom in Adyar. To my disappointment, I discovered that they do not sell the Classic 500 EFI in India (RE launched it in early 2010). The sales manager, Venkat, was kind enough to offer me test rides on the 350 cc models and I reluctantly took the rides. The machines were all great. I preferred the standard 350 and Electra over the Thunder bird.

I was resigning myself to wait for some months for RE to launch the 500 EFI, when I saw another test ride machine in the back of the lot. Painted in a military green (I learned later that it is called Alberto green) and chrome, the machine gave off vibes of power and menace that I walked up to to look at it.

A simple painted sign on the tool box cover read 500 cc. I first though that this was some ones practical joke as the bike looked more like a classic 350 or an Electra. As I turned away the Venkat said, “That’s a Machismo 500”. Do you want to test ride it?”. Does a dog wags it tail when you show it a treat?

We tooled the bike out of the lot onto the road and stood it up on its stand. The battery was dead and hence I had to kick start the bike. I went through the motions, dry kick 10 times, partially decompress, wait for the “woosh” and tightening of the kick start lever, fully decompress and kick. Man, the bike started with a sweet thump, music to my ears. Once on the bike, I immediately felt the power, its raw torque and the deep thump coursing up my legs. The sensation was amazing and any further descriptions will require censor board reviews.

I spent almost 30 minutes on this test bike that day. I was convinced and hence I made plans. The next day, I made it a point to pass the showroom with my wife and daughters. Again test ride on the Royal Enfield Machismo 500 but this time my wife and the girls taking turns to sit in the back. Universal opinion from the ladies, this bike is scary, very noise and very quick. I immediately wrote a cheque for the full amount and booked a black Machismo 500.

11 days later, I got a call from Venkat. Your bullet is waiting. I picked the Bullet in the afternoon of a Friday. I immediately fell in love with this black machine.

Today, I go to work because I can ride this bike out to work and back. Every time I stop at a red light and I see the looks from other rides on Pulsars, Yamaha’s and Apaches, I just rev the engine a bit. My way of staying “Don’t even think about it”. And when I make those long rides on highways and see other bikers trying to keep pace I let them for some time and then open up. I have taken this Royal Enfield Machismo 500 to 140 kmph on the Bangalore – Pune highway for over 90 kms without a break (actually I needed one to quite my racing heart).

Always remember these basic principles when you ride: