An historic brand in motorcycle history, Royal Enfield claims a heritage way back into the 19th century. Older than even Harley-Davidson, the Enfield brand was stamped on motorcycles from the industry’s infancy. Enfields were used in two world wars (as were Harley-Davidsons) and the British-built Enfields became popular models in both Britain and beyond. 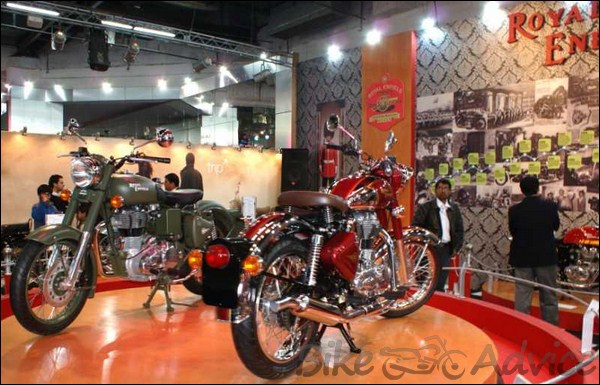 India began producing Enfield models under license in the ‘50s, eventually taking over the brand and naming rights after the original British company’s demise.

Now Royal Enfield is based out of Chennai, India. The company supplies its vintage-looking bikes globally, including a notable return to the North American market with its latest fuel-injected models. It recently announced a new CEO and more 2011 models as the brand looks to expand in the U.S.

On the other side there’s Harley-Davidson trying to muscle its way into the gargantuan volumes of the Indian marketplace, where more than 11 million units are sold annually. The Motor Company has plans to build an assembly plant to get around the high tariff imposed on its model imports, which are already expensive in the high-volume/low-cost Indian market.

The comparison of Royal Enfield and Harley-Davidson features striking similarities and differences. Both brands are roughly the same age, give or take a few years, with well over two centuries of history between them. The aged companies both produce bikes that are quite conservative and traditional compared to their contemporaries. Has the mystique of history hindered product innovation and development? Or have the two brands chosen to capitalize in the most advantageous way on that mystique, their most invaluable asset?

It’s an open question. But there is no debating the huge disparities that exist between the two companies. They are, after all, literally oceans apart. The cultural differences are even more pronounced and a good example is the different tones to the two companies’ recent marketing pitches, presented below via YouTube: The first is from Royal Enfield, dubbed “Handcrafted In Chennai”. The second is Harley’s promotional ad for its latest model, the Harley-Davidson Blackline.