In a bid to transform everything into living practice, Royal Enfield has parted ways completely with the traditional and long serving Cast Iron Engine which was being user for many decades altogether. Result, a ‘newer’ Unit Construction Engine, more popularly known as UCE comes into existence, by choice or by compulsion! With the pollution norms becoming ever stringent it was high time Royal Enfield switched to some modern technology to remain into existence. And with the enforcement of Bharat Stage III norms, time was ripe to change gears, shed off the old torn clothes and reveal the identity, completely! And with the inclusion of Bullet 350 with a 350cc UC engine, whole fleet of Royal Enfields now adorns the UCE technology. Bullet 350 UCE replaces the Standard 350. 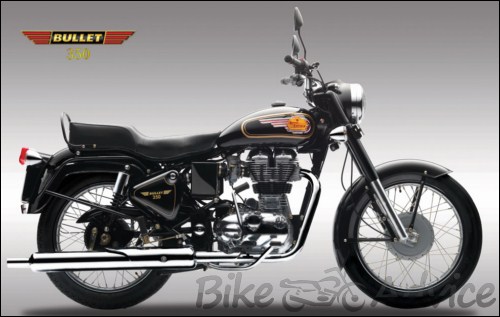 So effectively speaking, RE now has 4 bikes based on exactly the same 346cc mill with exact specifications on paper; Classic 350, Thunderbird Twinspark, Electra Twinspark and the Bullet 350 (also twinspark). Power and torque figures are 19.8bhp (@5250 rpm) and 28Nm (@4000 rpm), an increase of slightly less than 2PS from the earlier generations but more importantly a decrease of 4Nm of all important torque which also peaks later by 1000rpm.

Also, the subduing of the exhaust thump to a softer beat also takes the charm away slightly. But a newer technology does compensate for the better. Masculine looks have been carried forward from the earlier generation model with the UCE engine adding to the overall charm of the bike. According to the company, we can expect better and well spread power delivery along with superior fuel burning capability resulting in better fuel efficiency. Reliability has always been an issue with RE but as they claim it, this transformation would make the complete fleet more reliable with lesser maintenance. Tipping at 180 kilograms at the weighing scale also makes it one of the heavier machines from the stable.

Royal Enfield has not mentioned anything about any added color options and as an assumption we feel it’s only the traditional black color which would continue for this model. The differentiating factor for this bike is the Micarb VM 24 carburetor where others use the UCAL BS 29 one. Rear shock absorbers are the basic type compared to the gas charged ones on the other models. RE hasn’t provided disc brakes and self start even as options on this bike which speaks loud and clear that this is the cheapest of all the 346cc thumpers you can get.