Greetings! The world of two wheelers is never ending as there is some or other new bike being introduced in the Indian market. Not many days have passed since we rolled out the news of introduction of Royal Enfield’s Classic Chrome 500 into the U.S markets. Here is another piece of great news that will make all the Royal Enfield fans go crazy. News has it that Royal Enfield has announced the introduction of Classic Chrome 500 into India soon. This will benefit RE to not only enhance their brand image but also grab some sales. The company has made the announcement of bringing the bike to India on their Facebook page. 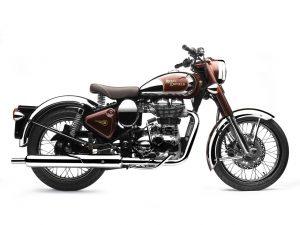 Few months back RE has introduced the Classic Chrome 500 in U.S markets and the company is planning to bring it to India anytime soon.

To the surprise of all the RE fans, the exact dates of Classic chrome 500 coming to India has not been spilled out by the company, however it is pretty much clear that the bike is going to come to our country. News has it that the Chrome version of the Classic 500 does not differ in many ways from its regular Classic EFI version in terms of the mechanics. It is also speculated that RE would bring in the Classic Chrome 500 with a non EFI carbureted engine for India. The Classic Chrome 500 is an all in one power packed bike that can produce a maximum power of 27.2 Bhp with up to 41.3Nm of torque.

The looks of this power packed baby are pretty much astonishing with whole body drenched in silver and chrome. The toolbox, tank and the front fender also sport generous and attractive silver color that adds to the bike’s look. Also it is expected that the Indian version of Classic Chrome 500 will sport 19 inch wheel upfront. All in all, RE has decided to launch this power packed bike in India anytime soon and one may see its sales rocketing soon after the launch in India. However, the company did not yet declare any date whatsoever thus all the RE fans will have to wait in order to get their hands on this power mill.