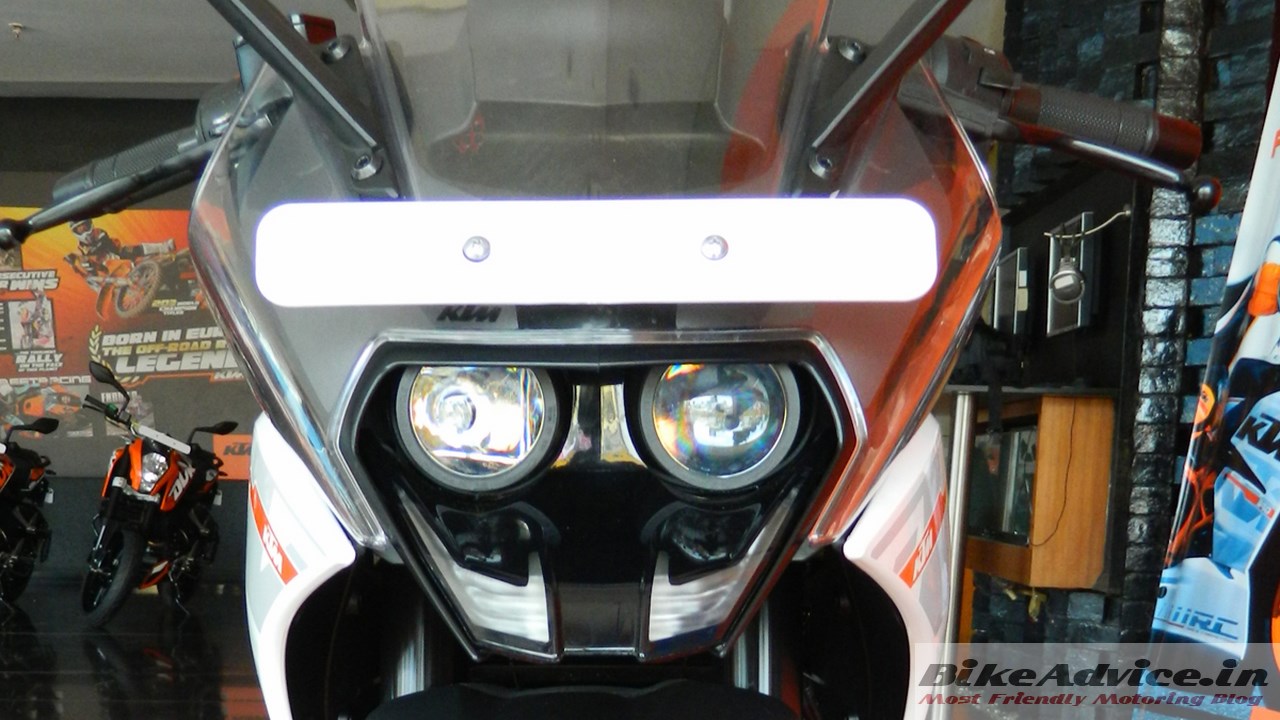 This interesting analysis and report is shared by our avid reader Rahul Majumdar who pens down his thoughts on the latest rage RC390, to help fellow bikers know more about the pocket rocket. An official review will be shared as soon as KTM Bajaj offers us a test bike

Did you know that the new RC 390 has it’s battery hidden in the front of the fuel tank?  No?

Why does the RC have projector headlights and not reflector ones like the Duke 390? No? 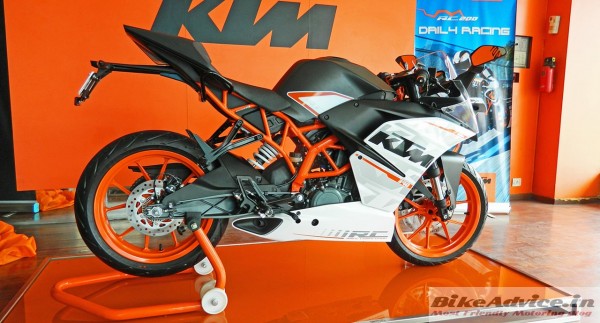 The RC 390 is a mid-level sport bike for the world market. But design wise it’s a one of kind motorcycle which has design and innovation never seen in any other motorcycle. I am sure, you are dying to know the answers to these questions. So just check out the YouTube video below to have a closer look at the bike in full HD and get the answers of all these questions. (come back to article for detailed analysis of the design and more photographs!)

First of all a big thanks to Vikas for this amazing footage. Today, we are here to talk about the RC390 Styling. There are Sport bikes releasing every year but the RC390 is definitely unique. The RC390 resembles nothing that we have seen before in the international Sport bike market.

If you think that the RC 390 is just a faired version of the Duke 390 then you are sadly mistaken. My obsession with the RC390 started 2 years ago when Stefan Pierer, in an interview to CNBC TV 18 announced that the KTM faired motorcycles were coming. After seeing the Duke 390 at the EIMCA in the year of 2012, I drew my own version of the RC 390. 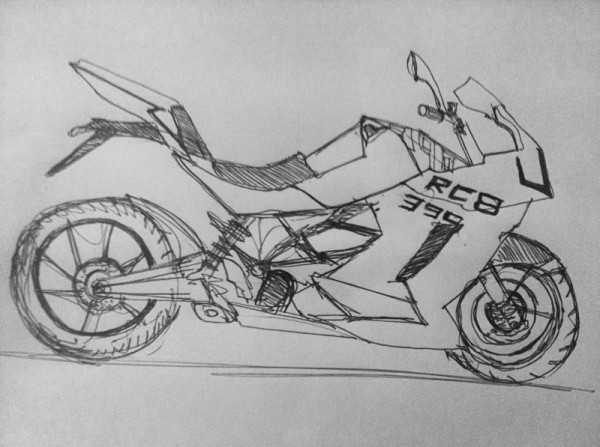 Coming from a country where bikes get sticker upgrades and minor changes and are reborn with new model names, my expectation was that the RC will share parts and body panels with its naked sibling. I am glad KTM designers didn’t think like me and took the effort to put out and all new motorcycle.

In the world of cars Mercedes A class, CLA and the GLA all share the same platform but all the cars have different dynamics and character. They look and feel different. The RC and Duke are also as much different. They are as different as possible while sharing the same engine and platform. 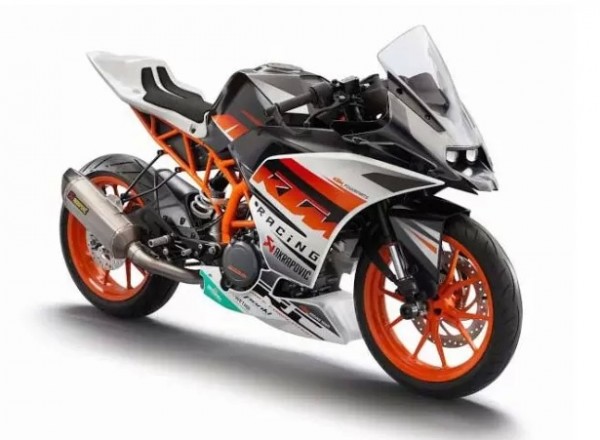 To understand the RC 390 you must first stop thinking of it as a sport bike. RC 390 is not a sport bike. Don’t look surprised? RC 390 is track bike. The idea of KTM designers were to the make the minimum changes required to make a race spec bike road legal. To understand this philosophy of form following function let us take a look at the BMW S1000RR and it’s oddball headlights. 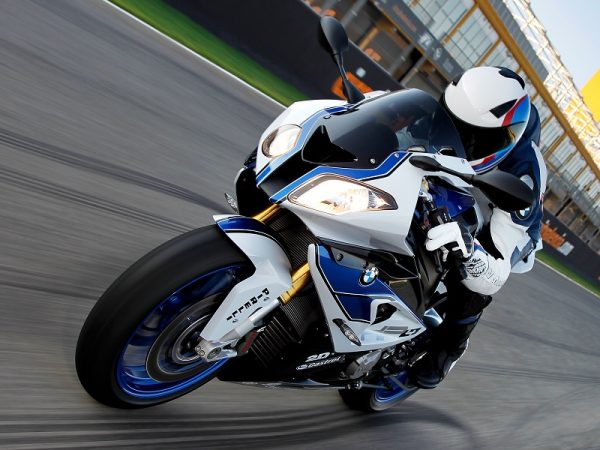 The small headlight on the right is lightweight and doesn’t create enough illumination for the bike to be road legal. The left one with the big reflector is the one for functional illumination. They could have made the right one big as well. But that would make the motorcycle heavier by 600 gms. So they decided not to. This is where European thinking defers from Japanese Thinking. This is the type of philosophy that has gone into the making of the RC 390. 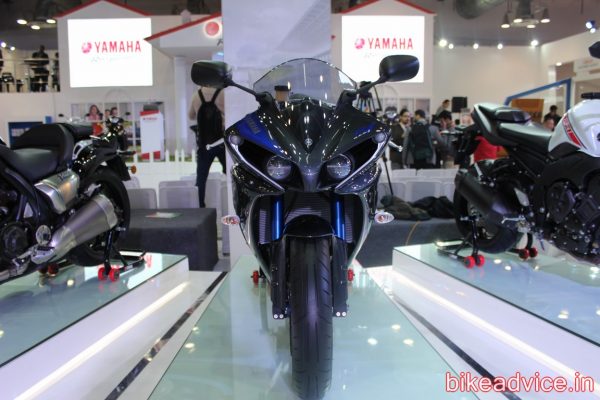 (In picture: the Japanese would have simply gone for symmetry)

Take the front for example. At first look, I hated it. Then I looked at their Moto 3 bike and ADAC Cup RC 390. Ad I realized that a wider prettier face might look cute but it will compromise aerodynamics. So out it went. The projectors allowed the headlights to be housed in a very compact space so they replaced the Duke 390s conventional unit. 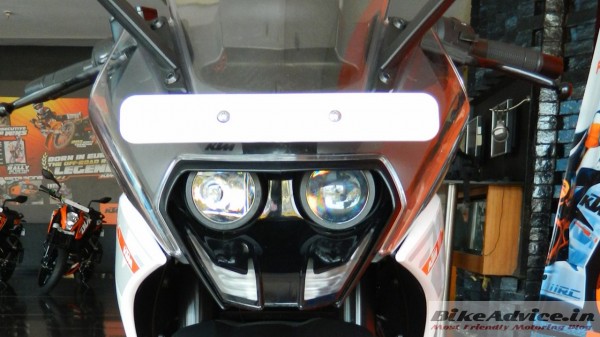 The result? A very aggressive looking front. If you see this from your bike’s or car’s rear view mirror, you will definitely feel intimidated. The DRLs only add to the overall aggression. 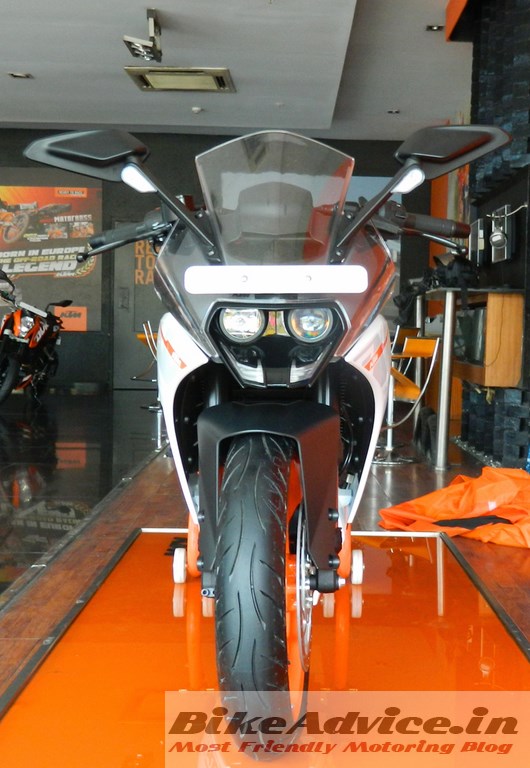 Now moving onto the fuel tank I was wondering why would they reduce fuel tank capacity in a motorcycle that looked like it had a bigger tank? Now I know. Sport bikes need the front to be heavier. This gives more feedback from the handlebars and gives sharper handling. The Duke 390 has a 50-50 weight distribution. So they took the battery from the position under the rider seat and put it in the fuel tank. This reduces weight from the rear at the same time increases the weight up front. Sadly it reduces the fuel tank capacity by 1 liter. 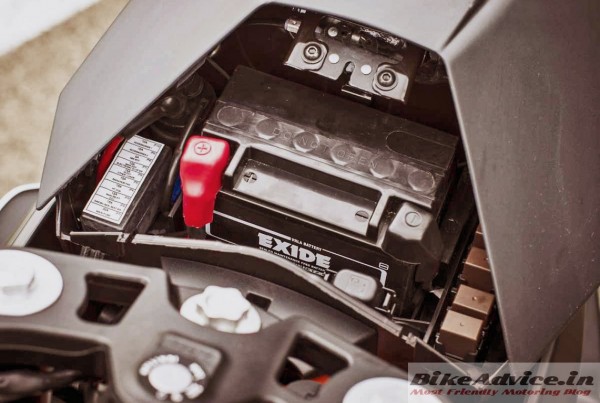 Still on the tank, the brutal geometric line on that matte black finish remind me a little about the Batmobile or maybe Lamborghini. Anyone else find the connection? Let me know in the comments section.

The overall styling of the bike focuses on aerodynamics but leaving the lines sharp makes the bike look like a rugged conceptual version and not and actual production motorcycle. The matte black finish only accentuates it. This is one for purists. Will impress the girls as well. 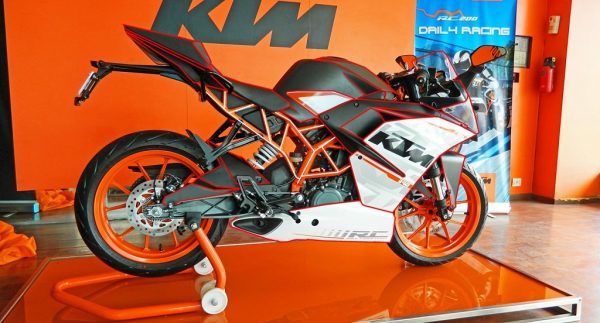 Speaking of girls… the pillion seat is the perfect example of the proverb looks can be deceiving. It’s seat that looks like a cowl. Just brilliant by KTM designers at KISKA. Everyone likes the looka of a rear seat cowl so much that they actually put one on. And then when a hot girl asks for lift they don’t know what to do. This is the perfect solution. I wonder why no one thought of it before? 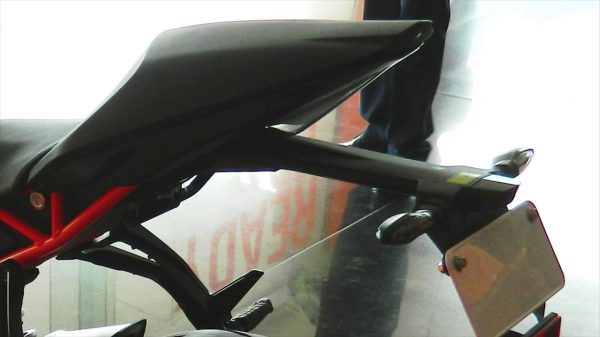 Moving to the super naked trellis frame… T-Rex fossil anyone? 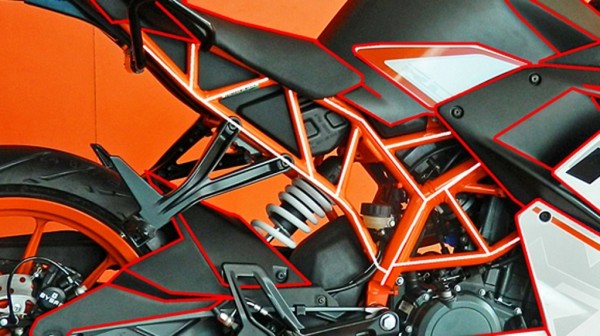 (The trellis frame reminds me of a Skeleton Fossil)

Well jokes apart, it does look very contrasting to the faired front end. I know many designers would avoid such a controversial approach.. Not KTM. It just asks me to make my strip my Duke further and make it look more naked… 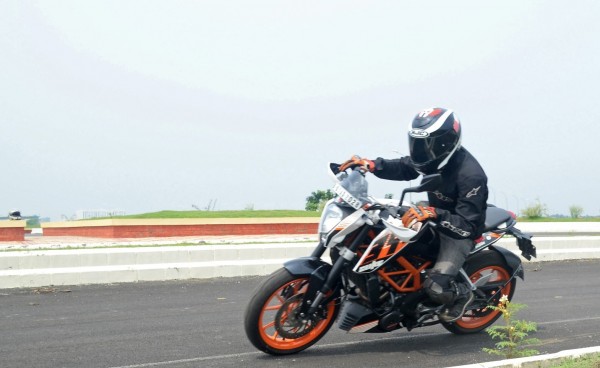 (The bike can be naked or faired… but the rider has to be faired, wearing full protection gear, I mean, don’t be a naked rider, safety message issued in rider interest)
Pillion grab rails are integrated in a neat tail but KTM India has decided to give conventional grab rails as well, I find it as disrespect to the vision of the original designers and if you can take them off that would be great. It’s a request. Oh! And that saree guard too. 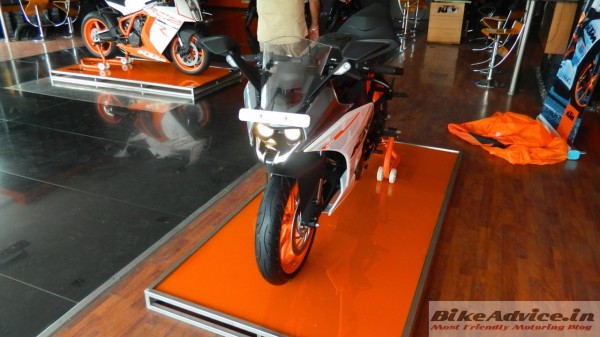 In conclusion, the KTM RC390 is a top notch track bike which has enough on it to fool the road legal check to pass the test. Even those front indicators look like an afterthought. Oh, I forgot to put indicators on the bike… the designer must have thought. Okay I know the perfect place, he concluded!

The RC is a benchmark not just in performance but in design as well. Stefan Pierer was right, the Japanese have a lot to catch up to. 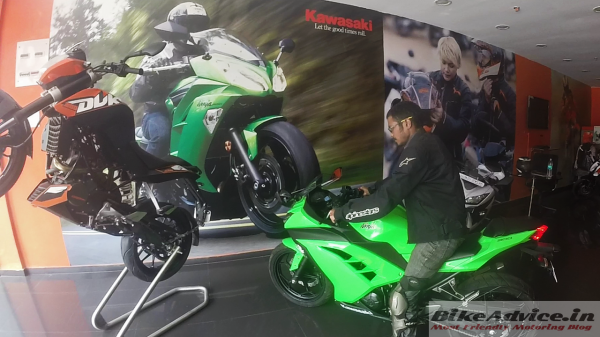 There is an overall masterclass in this one which is even more highlighted by the clean little touches here and there. Mies Van der Rohe (German Architect and creator of modern skyscraper) was right. God lies in detailing. 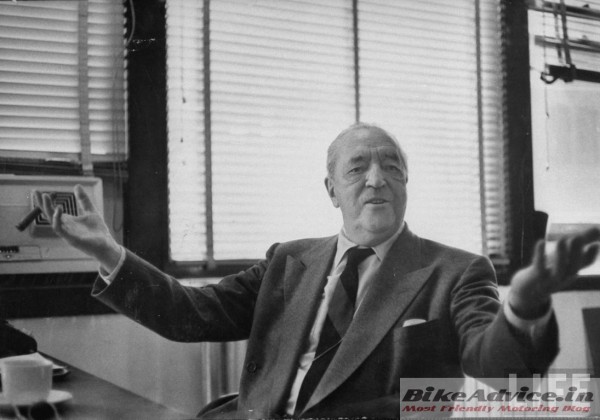 Disclaimer: All the statements made in this video are my own analysis. I would love to hear from Derestricted whether I am right in reading their designer’s mind. Forgive me, if I am wrong, and feel free to correct me.