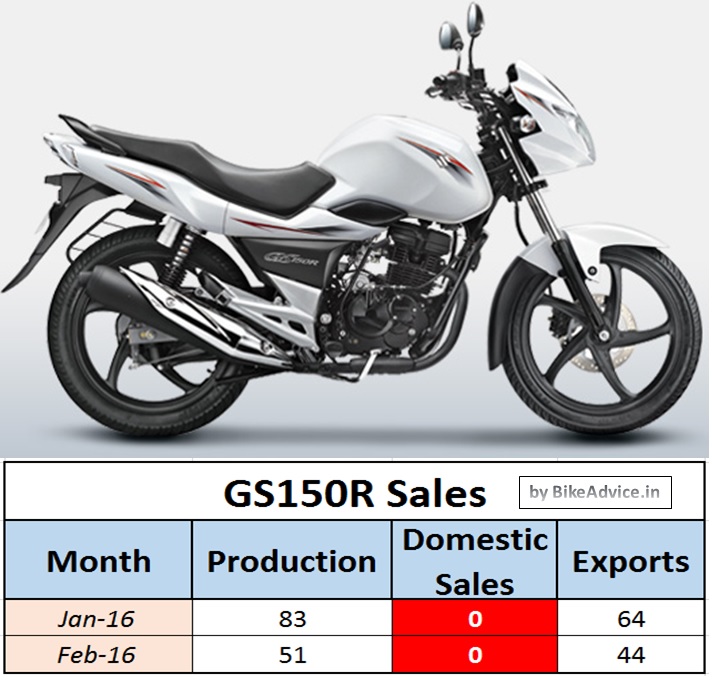 Amidst the success of Suzuki’s Gixxer, one motorcycle that has gotten overshadowed is its own sibling – GS150R. Despite being one of the best utilitarian motorcycles, only a handful of buyers prefer it over others. Sales for the last many quarters were double-digit low and for the two consecutive months of January and February 2016, Suzuki could not sell a single unit of the 150cc motorcycle.

Cumulative domestic sales figures for this year are just 385 units which is an average of only 35 motorcycles per month. And needless to say GS150R is the lowest selling 150 cc by a massive margin. For the month of January 2016, it was followed, surprisingly, by the Unicorn 160 which sold only 52 units. It appears Honda gave away its production capacity to the new Hornet which registered emphatic numbers (of over 13,000 units). For the month of February, combined sales of both these new 160cc Hondas stood at 16,133.

At the launch of the new Access 125, we caught hold of Suzuki’s National head, Mr Suresh Babu and asked him about the GS150R and if they plan to discontinue it from the market. This is what he told us..

We are exporting a lot. Domestic demand is low. If there is no demand it makes no sense producing it.

Not directly but he almost cleared that there will be NO update to GS150R and it has been discontinued. Whatever units are being produced are for the export markets and soon the motorcycle may go off the production lines as well.

Also Read: We Ask Suzuki India About Gixxer 250 and This is What They Said…

In comparison, Suzuki’s Gixxers are selling in handsome numbers and have registered over 75,000 unit sales from April 2015.