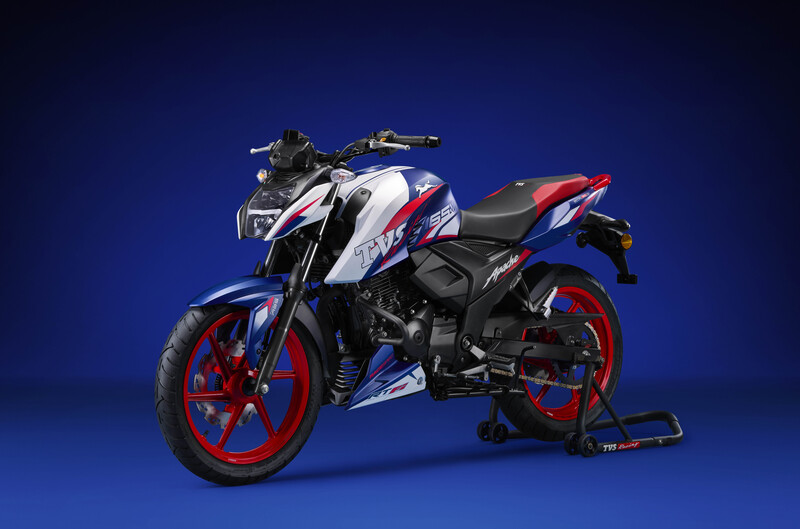 New Apache 165 power is higher than the Apache 160. TVS will offer it as a limited edition of only 200 units for now..

Not only is TVS creating fast machines, it looks like their whole company is inspired by their machines as they have very quickly launched their TVS Apache RTR 165 RP bike just two days after they released the teaser for their ‘RP’ moniker.

Today, on 23rd of December, TVS has announced that the TVS Apache RTR 165 RP will be the first bike which will be launched under their Race Performance (RP) series which is born from their racing’s high performance machine lineage. The RP series of Apache motorcycles are inspired by four decades of rich racing heritage of their TVS Racing Team. Only 200 units of TVS Apache RTR 165 RP will be available for sale to their customers.

They have achieved these hi numbers by developing a new cylinder head which has a 35% increase in intake and is fitted with a twin-electrode spark plug. Other changes in this engine consist of 15% bigger valve control by Hi-lift and Hi-duration cams and dual-spring actuators, area wise bore stroke ratio of 1.37 that is allowing a free revving up to the red line and addition of a new dome piston for a higher compression ratio.

This engine is mated to a 5-speed gearbox which appears to be the same as the standard model.

The motorcycle is equipped with features which include a race-tuned slipper clutch, adjustable clutch and brake levers, all new TVS racing decals, red alloy wheels and a new seat pattern. Other additions include a new head lamp assembly with their signature Front Position Lamp (FPL) and first-in-segment 240 mm rear disc brake for better braking performance.