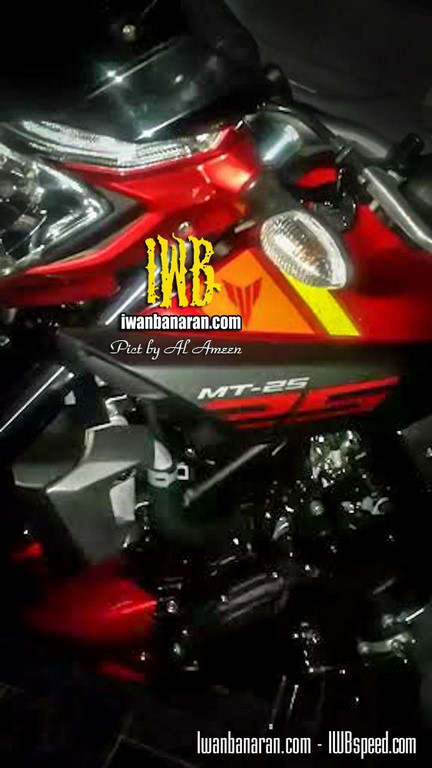 Its official, the naked R25 is happening and it will be called as MT25, following the nomenclature of the elders in the lineup like the MT07 and MT09. Codenamed as B04, the motorcycle is expected to be launched in Indonesia sometime next month (while we poor souls in India still struggle to understand if we will get the R3 or the R25 or some more Salutos 🙁 ).

Thanks to this spyshot shared by Iwanbanaran.com, we have a confirmation that the naked that was frequently spotted on tests in Indonesia will get the ‘MT25’ moniker. The head lamp cluster, unlike the bigger MTs, looks slightly different. It gets LED pilot lamps just above the head lamps. The front suspension forks, which are believed to be upside down, are blackened like the MT07 and not golden like in the MT 09.

The MT logo, along with displacement suffix rests on those tank extensions like the other MT members. It also gets a tiny visor for wind protection.

The report further states that Yamaha is expected to launch both the ABS as well as non-ABS variants at the same time.  The bike will essentially be the same twin cylinder 249 cc engine which produces 36 PS of power and 22.6 Nm of torque on the R25. We are not sure if there will be any detuning!

We can rejoice considering that someone in the world will be riding a twin-cylinder 250cc naked Yamaha soon, while we may still be stuck on Salutos!