‘Pulsar’ has always been a sensational brand in India.  I always tell my friends not to comment anything in the negative sense about Pulsar bikes in any of the social media sites. Whoever does it is sure to be screwed up by either by some Pulsar user or a Pulsar lover. Such is the reputation the brand has built among the Indian youth. 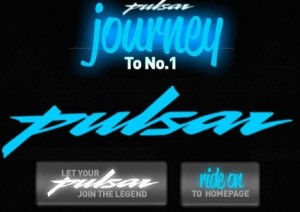 Even today, Pulsar is considered to be the lifeline for Bajaj Auto. Whenever, a new record is set by Bajaj Auto in terms of sales, Pulsar would be the brand behind the manufacturer’s success. But, how is the brand so successful year after year consistently for a period of more than 10 years.

Right from the day of launch, Pulsar is projected as a name that could be related to the best of man – ‘Being Masculine’. The first commercial of Pulsar when it was launched way back in the year 2001 projected the bike in such a way that it could be attached with the words within the quotes above.

As Bajaj Auto kept on coming with more and more variants of the same bike, it also developed the site ‘mypulsar.com’. This site was very interactive and the idea of ‘Pulsar License’ added spice to the website. Under mypulsar.com, the company has now developed a page which showcases the history of the Pulsar brand.  It also links to the first few Pulsar TV commercials making every Indian youth feel nostalgic and remember those few days of one’s biking life.

The site also has a huge list of PulsarManiac’s name with the bike in the colour they own showcased. You can find the name of people who went crazy about this particular brand of bike from the month of Jan 2001 to this month this year.

There are two facts about Pulsar displayed on the top right hand side of the page for which every single Pulsar user or a fan can be proud of. First one is, ‘Every 30 seconds a PulsarManiac is born’, which simply means that every 30 second, a Pulsar bike rolls out from the company’s plant (and I’ve seen it live too right in Bajaj’s Chakan plant). The second fact is that ‘One of two sportbikes sold in India is a Pulsar’. (I can see you guys lifting you collar up as you read this.)

The link also mentions the number of Pulsars sold till date and as I’m working on this post, the figure reads 4912418. The page is also designed in such a way that we are forced to stay here and spend a few minutes interestingly before we close the browser. Of course, mypulsar.com is known for that!

All fine, but we wish the company comes up with announcements of the upgraded Pulsar which as earlier said by Mr.Bajaj should have been out by now. Bajaj Auto, Hoping to hear soon from you regarding this.