The superbike market is growing its boundaries day in and out. One more addition to the super bike segment came when MV Augusta took off wraps from their ultimate machine the 201Bhp producing powerful 2012 F4RR. The F4RR is a superbike that has the potential to revive the superbike markets. It is speculated that the fight between MV Augusta and Ducati will be on as Ducati is an already established superbike maker. 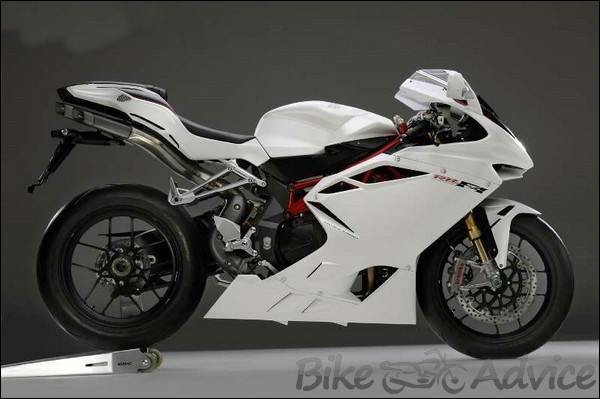 As far as the specifications of the bike go, they are just one of the best in its class. F4RR sports a liquid cooled petrol engine that is capable of generating a whooping 201Bhp @ 13,500 rpm and 114Nm of torque @ 9,200 rpm. As far as the top speed is concerned, this devil can go up to the speeds of 314 kmph.

F4RR is one massively powerful bike that is definitely here to stay unless someone manufactures a product on par with this one. The cubic capacity of the engine stands at 998CC. The bike comes with titanium air intake valves that will help the bike attain greater speeds and power. Also the bike comes with light weight alloys which are to give it more speed and flexible handling.

F4RR comes with dual discs in the front tyre as against single disc in the rear tyre; this will surely help the biker control the bike when traveling in high speeds. Both the tyres in the bike (front and rear) are wider and hence there is no issue in handling the bike. Other specifications include Ohlins TTX36 shock absorbers, Brembo radial master cylinders and a choice of customized paint schemes that adds to this monster. Lastly the bike sports revised exhaust for better and powerful performance.