Hero Honda is all over the news these days. Whether it is increasing prices, searching for new partners or confirmation of break up news, we just cannot get enough of Hero Honda these days. As per the latest news in Economic Times, Munjals of Hero group are accumulating funds to buy the Honda’s stake in the joint Venture. 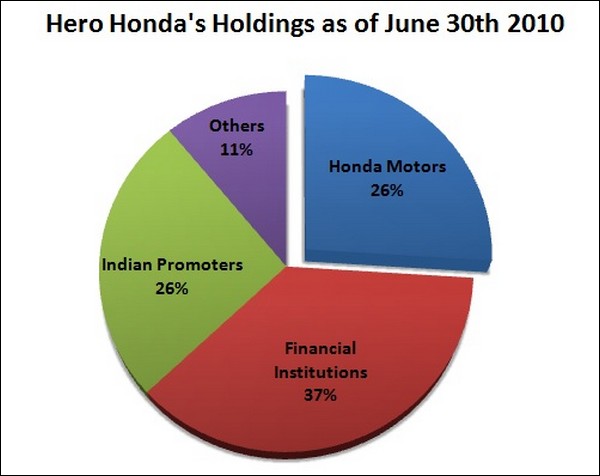 As per the latest news Munjals of the Hero group have initiated talks and discussions with the lenders for borrowing enough money to buy their long time partner’s share in Hero Honda. Munjals are engaged in talks with both foreign and domestic banks like Bank of America and HDFC. The Hero group is also reaching non banking sector for getting finances, non- banking institutions like L&T has also been approached by the Hero group.

The talks and discussions regarding the financing needs are going on for sometime now but the banks and corporate ,whose name have come up, are not opening up to make any statement until something is certain and the discussion to finance Hero group reaches some firm decision.

A HDFC spokesperson said that the bank is aware of the deal but nothing can be said until a firm decision on the financing needs is took. Mr. N. Sivaraman (senior vice president, finance) of L&T said that the company will not comment whether any proposal has been received or not. Bank of America’s spokesperson refused to comment.

Honda holds 26% stake in the joint venture which are worth some $1.2 billion at 40% discount to its market valuation. Hero group has several business like BPO business, real estate business and auto auxiliary which may be pledged as collateral securities to the loans the group takes, said an official from Hero group who wished to remain anonymous.

Mr. Rakesh Batra, partner and head of automobile practice at Ernst & Young. “The loans will be required in the short term to finance the deal, before the Munjals sell the equity to private equity investors , who seems to be involved in the negotiations”. Other news related to the deal has it that the there are certain group of investors who are not happy with the terms of the break up but this will hardly have any effect on the latter as the minority shareholders does not possess any veto power. Its time to give Hero Honda a farewell as the Hero group has already geared up to pay of Honda’s stake. Bike Advice wishes both the companies all the best for their future.