Mopeds, which were once a great mode of city and town commuting is appearing to get close to its extinction phase. With the advent of motorbikes, which are able to offer a great power combined with a great fuel efficiency was the reason for the present strand of mopeds. Also, the major two wheeler companies paid the least attention to revive this segment of commuting. 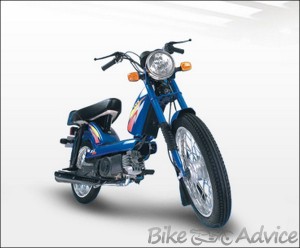 According to Economic Times, ‘In May, the country produced 70,001 mopeds , up from 54,702 units in May last year or 28% more in number terms. More importantly, May 2011 saw the highest moped sales for any month ever. The Society of Indian Automotive Manufacturers (SIAM) has projected a growth of only 12 to 14% for the domestic two-wheeler industry this year.’

Mr. Abdul Majeed, an auto practice leader at PricewaterhouseCoopers said, “Moped as a segment has a great future. For now it may seem as a very small segment. But, if manufacturers tweak the product to the changed needs of the customer, this segment can see much higher numbers”. “This is situation like the scooters of the early 1990s when everyone thought the segment is dead. Then came automatic scooters and sales zoomed. We need someone to innovate in the moped segment which will drive up volumes”.

In a market where motorcycle sales is upwards of a million units a month, selling 70,000 mopeds may not sound exciting. It is to be noted that TVS Motors is the only brand in India that still manufactures and sells mopeds here. But, however the TVS XL Super is still preferred to a greater extent by shopkeepers to carry their load from markets, delivery and so on. The Heavy Duty model is the one that can suit their needs. Priced at below INR 25,000, it is not really expensive to own one. Maintenance, oh forget it!

“Mopeds have long moved and ceased to be a vehicle which just moved people from one point to another. Today, it is more a multi-activity vehicle with fitments. Its position as the entry level motorized vehicle with two wheels cannot be challenged,” Kumar Kandaswami, Senior Director & Country Manufacturing industry leader, Deloitte said.

“Take TVS. Their moped manufacturing lines have been ammortized over the years and hence they have the pricing power on mopeds. For a new entrant, the pricing would be difficult to match”, industry sources said.

There are a lot of people watching the segment from the fence, hoping to see how volumes are picking up. “With little bit of innovation and higher volumes, I expect the segment to drive up higher sales,” PwC’s Majeed said.

Does this mean that the moped segment will revive back in the sub continent? What’s your thought on this? Leave your comments below.