Amidst all the speculations and rumors, one thing that has been consistent is the company’s brave front put against any leak of information regarding their much awaited and anticipated motorcycles. The information has been kept secret to the level that no one knows the exact cubic capacities of the bikes, forget the names.

But what we do know is that Mahindra is about to launch TWO motorcycles on 30th September 2010 (the initial planned date was 29th September). The venue they have chosen to unleash the bikes which marks their foray into the motorcycling segment is our very own Mumbai. Mahindra, in fact launched a contest on Facebook – the popular social networking site, a few days back where they asked the viewers to guess the names of their two ‘to be launched’ bikes out of the given 40 names.

Mahindra also asked the contestants to complete a slogan which depicted Mahindra and its motorcycles in the eyes of the masses. The about to be declared one lucky winner gets the chance to fly to Mumbai to witness the grand launch of the Mahindra motorcycles and meet Anand Mahindra, the Vice Chairman and Managing Director of Mahindra along with a few invited Bollywood celebrities who would be present on the grand occasion.

Till we dig more we list the probable names for you to play with. 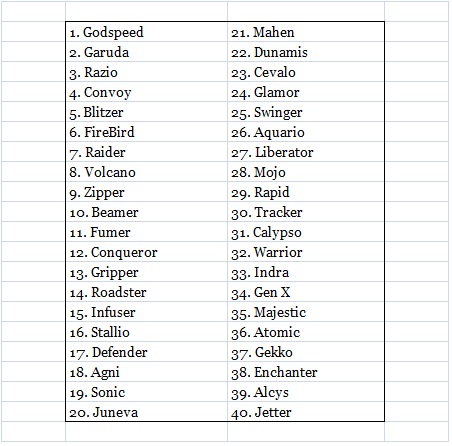 What do you think Mahindra’s motorcycles names would be? Guess and put it in the ‘Comments’ section. We would be back on 30 September or till we get more on the bikes.

Deepak - June 3, 2020
We discuss what is centrifugal clutch - how does it work and its various advantages and disadvantages in this story...