Mahindra two wheelers had a very good time last year as they managed to sell 70k units for the complete fiscal with the help of just a single 125cc mill under three different scooter models which also happened to be there debut year in two wheelers. In a bid to further strengthen its sales, Mahindra has launched the puny and cheap(er) automatic 71.5cc Kine which is the same scooter which was sold under the older Kinetic brand. 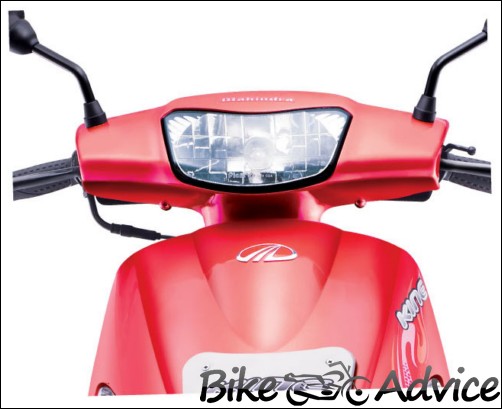 The surprising part is that the company has kept absolutely quite and there is no hullaballoo about the new launch.

Mahindra Kine is a very practical scooter aimed at young crowd between the age of 18 and 25. The whole scooter has been kept the same apart from a few tweaks here and there. The new scooter comes with fresh new graphics and a body colored grab rail to add to that style quotient. 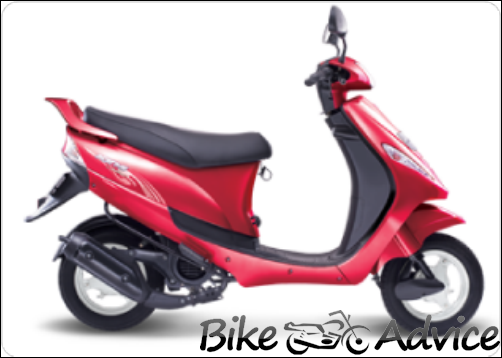 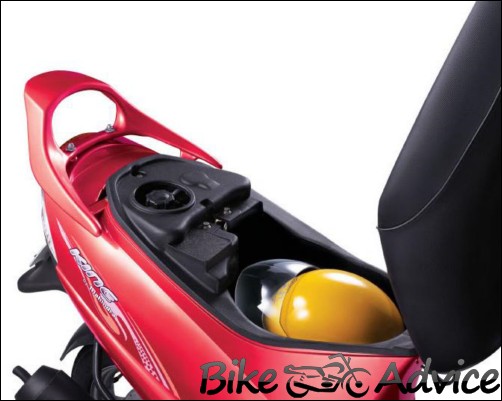 Mahindra has priced this scooter at a very competitive price bracket of 30k ex showroom Delhi and for starters or someone who wants something light (both on earth and pocket!), this scooter looks to be a good companion. With this model in the lineup, Mahindra has now four beauties to flaunt: 125cc muscular Rodeo, ‘all purpose’ Duro, busy Flyte and cute and little Kine.

ABOUT KINE: Mahindra Kine sports a small 71.5cc mill which is capable of churning out 3.8 bhp @ 5500 rpm and maximum torque of 5.0Nm @ 4500 rpm which seems too small but the kind of usage and people this scooter is targeted at, these figures seem justifiably good. This scooter would be available with both self and kick start as standard. Drums of 112.5mm do braking duties on both front and rear tires. Petrol tank capacity of the bike is 4 liters which happens to be lowest among all the scooters. 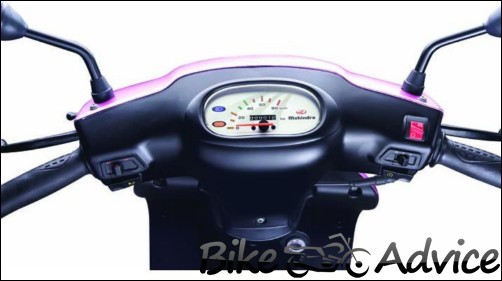 Company claimed top speed of the scooter is 80kmph which is a slight surprise for this small a package! The scooter tips at 82 kilograms dry on the weighing scale which is probably the pick of the features of this scooter. This makes it very easy to handle and ride for beginners or kids who have to get some ‘forcible-mom-ordered’ vegetables from the market. Wheelbase and ground clearance of the scooter are 1225mm and 120mm which might not be very luring but still acceptable. Mahindra has tried to incorporate as much space (possible) for the knees but our Kinetic Kine’s experience does remind us that it always felt cramped but then it probably was never meant for people like us! This scooter will be available in four sparkling colors, Red, Black, Pink and Green and the scooter looks pretty in green.
This scooter is directly aimed at TVS Scooty Teenz which is an even smaller 60cc and a less powerful engine but priced on similar lines. We feel Kinetic did not do justice to this product but under the hands of Mahindra this scooter suddenly starts looking very prospective for the company’s fortunes.