The Best Touring bike in it’s  segment and claimed to a tourers delight that has proven itself in all the tormenting conditions that the rider has put through, the BMW R1200RT has been spotted testing in the south of France ahead of its launch which is supposed to be in 2014. 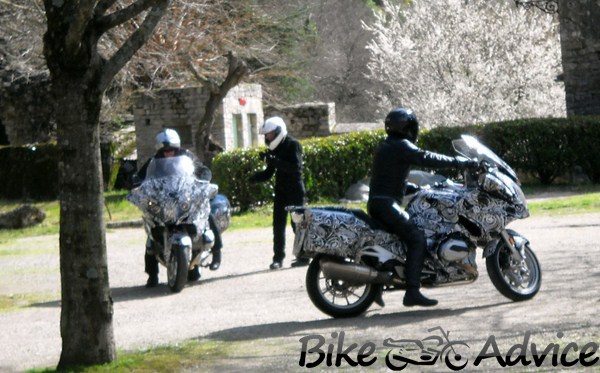 The BMW R1200RT is the current best selling tourer around the world but especially in UK its tops it all which will be replaced with the model that is undergoing it’s testing.

The new liquid cooled R1200RT is supposed to be having the 125bhp motor from the recently launched BMW R1200GS adventure bike. As known the BMW R1200GS was completely re-engineered with not just a bigger liquid cooled engine but also with a completely redesigned new chassis, single sided swingarm, shaft drive technology and a new exhaust system.

The four bikes that were spotted testing had one or more things in common with the BMW R1200GS with respect to the Liquid Cooled Engine, the single sided swingarm and shaft drive system. 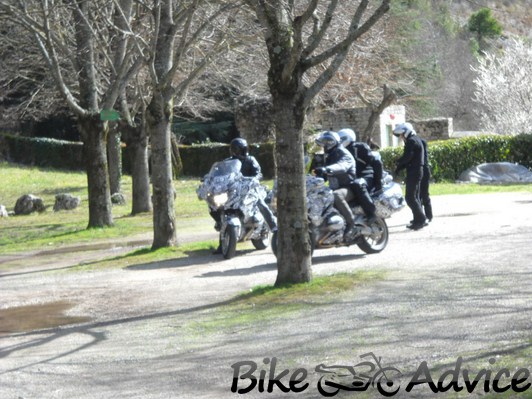 Although the exhaust seen in then pictures is a little different from what is seen on the R1200GS, analysts say that this might not be the fully finished production version of the exhaust.

The front fairing shows that the new BMW R1200RT has got the highly advanced adaptive headlight system adopted form the BMW K1600GT which can adjust the level of the headlight beam as the bike leans into corners and exits. The front fairing is also seen modified with new plastics around the new headlights along with the side panels, which have incorporated new air-ducts which are sited next to the new twin radiators which forms an integral part of the cooling of the new engine mounted.