The idea for me to post this particular write up arose when our photographer Sharat mailed me the pics of the Honda VFR 1200F which had had clicked at the time of Bangalore Auto Expo 2011. So, let’s get to know about this bike more in our blog now. 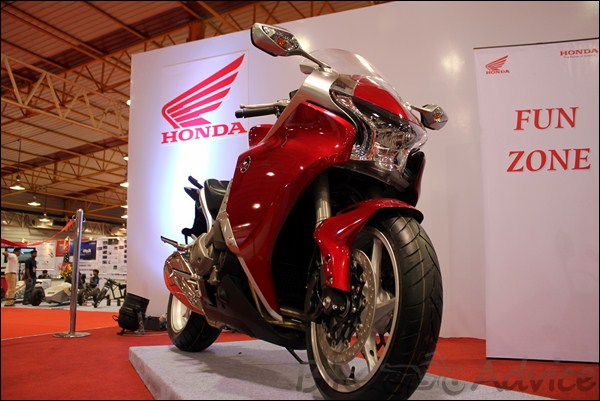 The story of the VFR 1200F can be traced out to Honda’s home ground Japan and Tokyo to be even more specific at the time of Tokyo Motor Show. It all started back just a couple of year back in 2009. Isn’t this different from the other bike stories which we hear? The production of the first bike under this badge commenced in October 2009 with deliveries promised to start as early as the initial few months of 2010.

This bike is in a way related to India. I’m pretty sure that most of you would have guessed it right. Yes, it is based on this bike that the CBR 250R’s design got evolved from. The side fairing, the headlamp design and to an extent even the colours of the CBR 250R were derived from this macho bike. That’s in fact one of the reason why both these bikes are better performers as tourers rather than being used as track bikes. 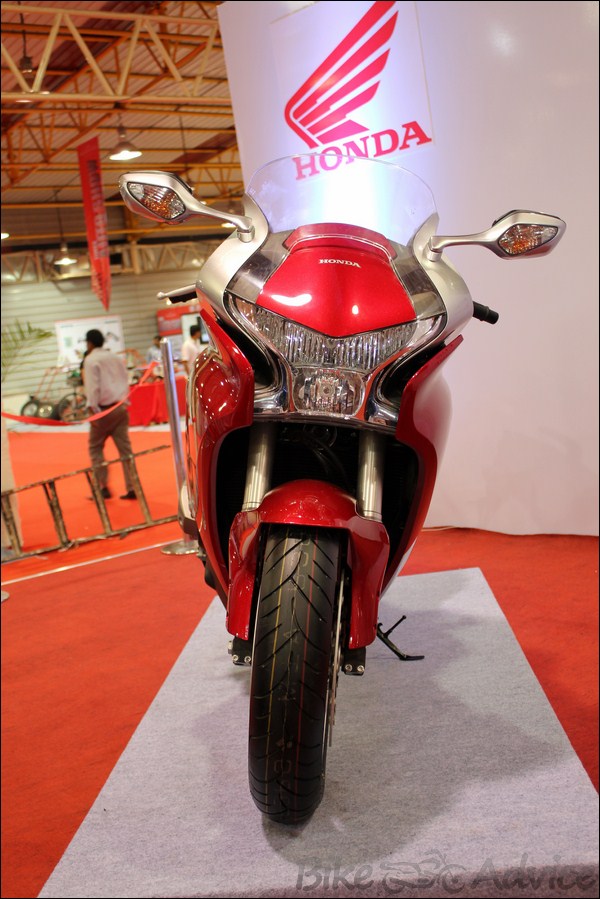 The VFR 1200F is the first ever bike from Honda’s stable to feature a Throttle – By – Wire system for perfect acceleration which also adds up to the just right kind of throttle control. The Electronic Control Unit (ECU) fitted in the bike takes in the rider’s throttle control as the input by constantly keeping a check on it and returns the throttle response which the rider requires at that point of time as output. 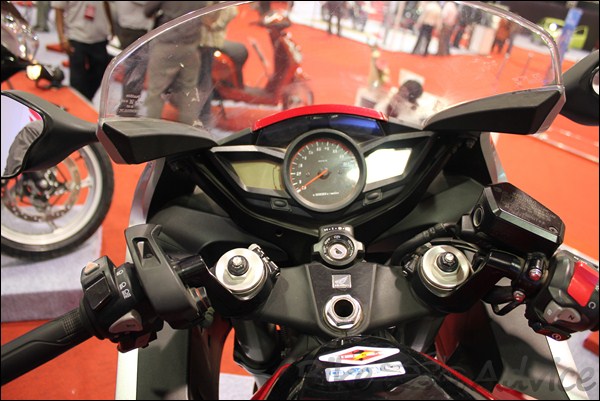 The bike boasts of an integrated side fairing which houses air cowls within it. This integrated design makes the entire bike looks big and bold and offers the perfect aerodynamics that is required for a comfortable tourer like the VFR 1200F.

Next point about this bike which deserves a special mention here is its exhaust deign. It ends up in a broad manner but still looks tiny and gets adapted perfectly into this mean machine. It is designed keeping the concept of mass centralization is mind which enables the rider in having a cool riding position. The note coming out of this exhaust brings the V4 engine live onto the open highways to capture the attention every single rider passing by.

There are two more special aspects of this bike which I’ll discuss blow. One is the transmission of this bike and the other is its engine. Talking about the transmission, the VFR 1200F is available with two options as in the case of higher end cars or for any other automobile for that matter.  Honda has offered the choice of either servo – assisted paddle shifters or a fully automatic six – speed gearbox.

Now, what is this dual clutch actually? Well, it’s a pair of clutches which splits the power transmission between odd and even numbered gears. For instance, if you are opening the throttle, say in second gear, third gear is already engaged but the ‘odd’ clutch is disengaged. Now, when you are all set to upshift the gear, all that you need to do is just touch the paddle located on the handle – bar on the left side, and in an instant the ‘even’ clutch disengages and the ‘odd’ one engages. There’s no noticeable interruption of power which gets transferred to the rear wheel. This is indeed an advanced mechanism found to be very comfortable to use. No other two wheeler manufacturer had so far made use of this dual clutch mechanism. Just imagine this mechanism and you’ll fall love in it. Note that this is an additional feature and is not standard. If you’re not interested in this model, then there is anyway the base model still available for you. As mentioned above, it houses a six speed manual gearbox. 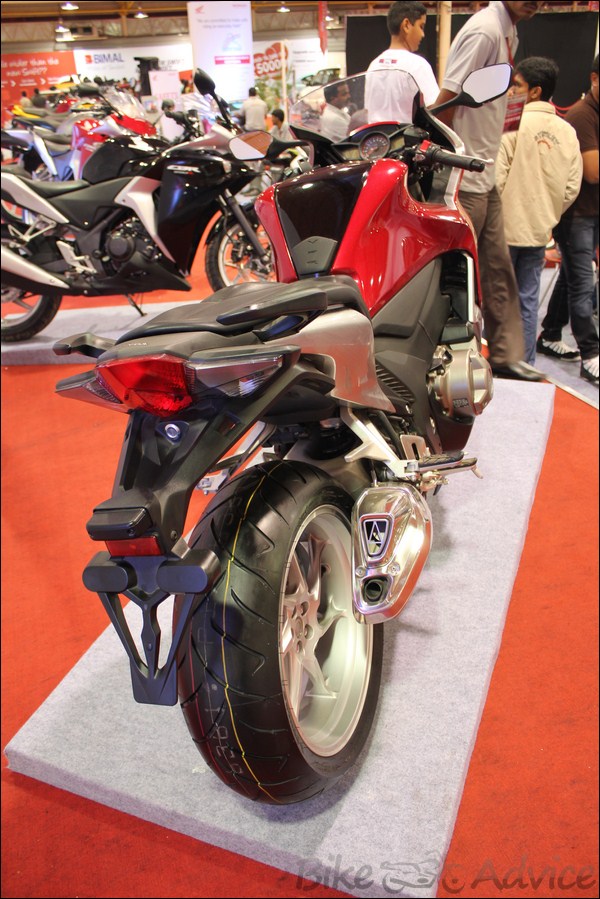 The Powermill of the Honda VFR 1200F is a he transverse-mounted V4 with a displacement of 1237 cc. The engine also makes use of ‘unicam’ system where the engine incorporates the usage of a single overhead camshaft distribution system. This system enables the bike in reducing the hefty size of the engine considerably, thereby allowing the placement of engine furthermore front so that there is an equal distribution of bike’s mass and the Centre of Gravity as well. Each crankpin is offset at an angle of 28 degrees as against an angle of 180 degrees in the VFR 800. This drastic reduction in terms of angle enables better firing order which in turn reduces unwanted engine vibes. 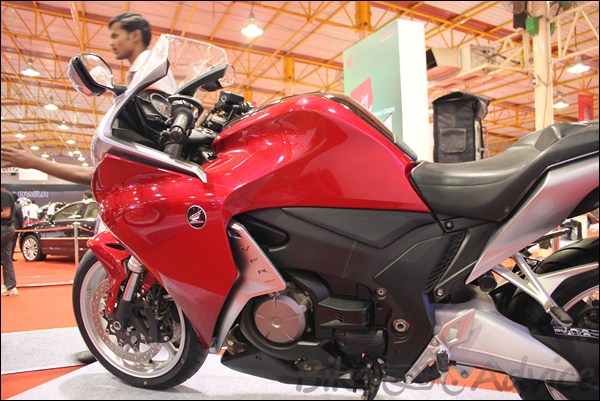 The V4 engine has the rear set of cylinders placed very close, with their larger ends of the connecting rods on the inner sides of the crank journals. The forward set of cylinders is placed outward, with the big end journals placed along the outer sides of the crank journals. This unique design allows for a much narrow shape of the engine at the rear end. Te advantages of a leaner and a slimmer engine are mentioned above. So, lemme not repeat it again.

The brakes, oh yeah, I will have to mention about them, right? The front braking system houses Dual full – floating 320mm discs with CBS (Combined Braking System) six – piston calipers with ABS. The rear braking system boasts of Single 276mm disc with CBS two-piston caliper with ABS. These brakes together simply means that the best of braking experience is assured for sure. 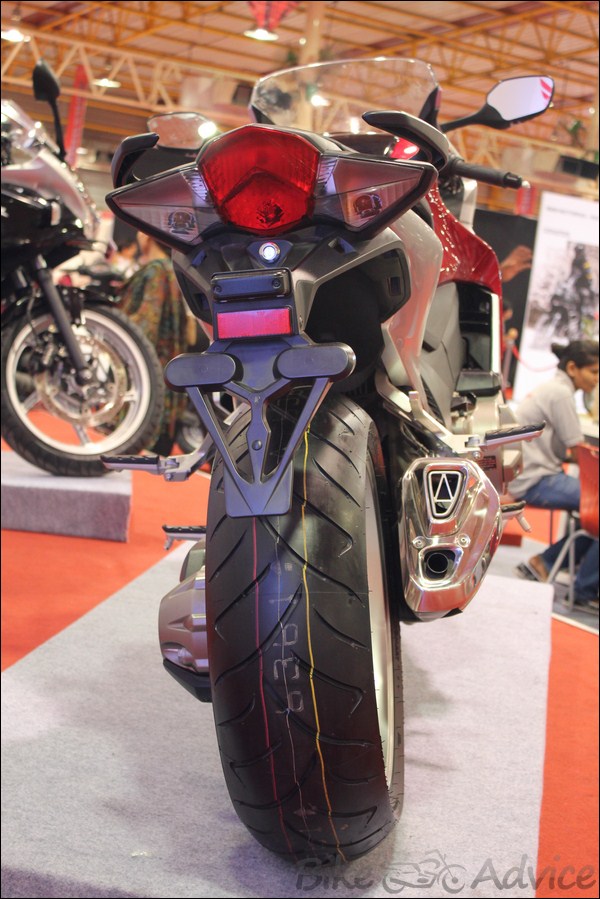 The bike is available in three attractive colour schemes across the globe Viz, Pearl Sunbeam White, Seal Silver Metallic and Candy Prominence Red. Finally, a word on the price. The Honda VFR 1200F bears along its neck, a price tag of INR 17.5 lakhs (Ex – Showroom, Delhi) and an on – road price of INR 19,25,625.