Initially, it was rumored that the KTM Duke 125 was the one for India. There was a big discussion among Indian bikers and riders on why to pay such a hefty amount for a mere 125cc bike. Then there were seen the KTM Duke 200 strolling along the Pune highways near Bajaj plant. This made the bikers pretty sure that this is the one for India. 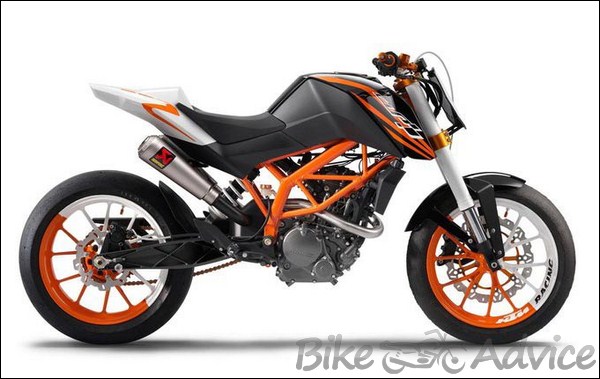 Now here is the official news from KTM that the bike will be launched in the 2012 Auto Expo, which is the most speculated automobile event in the entire sub continent. Mr. Stefan Pierer, CEO of KTM Sport Motorcycle AG revealed this much awaited launch. He said, “During the Delhi Auto Expo next year, we will be launching the first 200 cc Duke bike in India”.

And here we come to the interesting part of this write up. Guess what? Mr. Stefan Pierer revealed that KTM Duke 350 will follow the Duke 200’s foray into the Indian market.

Both the KTM Duke 200 and 350 which are set for Indian market will be manufactured in Bajaj’s Chakan plant, as in the case of the Duke 125 which is exclusively exported to the European market.

The launch of the Duke 350 would make it the bike apart from Royal Enfield to come up with this displacement here in India. (Refers to the decent performing models which were launched in India).

KTM is making use of Bajaj’s plant with the intentions of exporting these models to other countries which include Brazil, Thailand and Malaysia.

So, here comes a 350cc bike to India which I think is a worthwhile consideration for all those who are interested in an economical yet a peppy performing bike.

I personally am very impressed with the design concept of all KTMs. I’m eagerly awaiting with fingers crossed for the launch of Duke 350.

What have you gotta say about the design concept of this street come naked bike. Are you interested with the entry of this brand into India? Let others know your thoughts about the KTM Dukes.