Greetings! The world of two wheelers is full of surprises and spy shots. In the most recent spy activity KTM Duke 200 was spied again at Lonavala. This pretty much made it clear that Bajaj will soon launch the much awaited street bike i.e. KTM Duke 200 in India. Hopefully as the spy shot is taken it can be pretty much made up that the bike will be launched by the year end only. 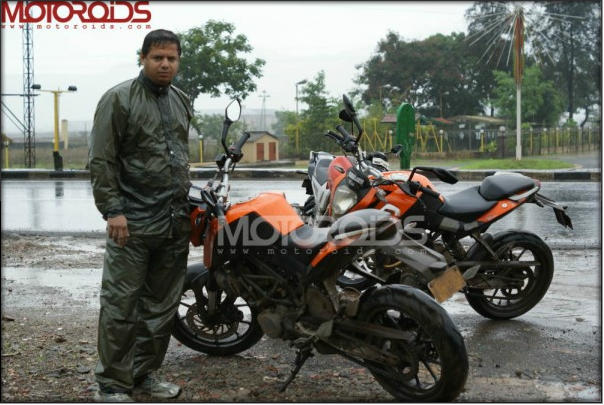 These spy shots of the KTM Duke 200 will certainly bring a sense of happiness to many people who have wished to buy this street wonder. The story regarding the spy shots was published on the Motoroids news portal confirming the launch of the Bajaj – KTM baby soon into the Indian market. Since many days there are speculations going on regarding this bike and every now and then the air was filled with grapevine but this spy shot confirms that there is some serious thing going on in Bajaj – KTM joint venture.

So how did the spy shots surfaced? Well actually the bikes (Ya not one but two KTM Dukes) were parked outside a hotel as the riders halted for a break there. It was then the images of the bikes were clicked. There were two bikes and they were just the prototypes and not the production models (as reported on Motoroids).

It is no hidden fact that KTM and Bajaj have been working on the 200cc variant of the bike since long and they may surface it anytime soon. The 125cc variant was manufactured and exported to Europe from the Bajaj’s chakan Plant.

News has it that KTM 200 would support many of the first time features such as upside-down forks and (possibly) a chromium-molybdenum trellis frame. All in all, it gives us immense pleasure in rolling out this news regarding the most awaited bike and we hope that Bajaj- KTM launches this wonder soon. Also the 200cc engine can be closely compared to the new CBR250Ralthough the final decision would lie upon their real time performances. Let us keep our fingers crossed and hope that the bike  soon shows up on to the streets .