Generally, knock has been recognized as particular kind of sound comes out from engine at the time of sudden acceleration. But majority people don’t know about the exact particularity of this sound. Moreover, they are also unaware about the source from where this sound comes out in the engine. Another rumour about knock is its relation with sudden acceleration and sudden retardation. Knock is not at all a result of acceleration or retardation. One more blunder I heard from a mechanic was very shocking. He said “knocking does not take place in single cylinder engine”. It’s totally erroneous though accepted by many mechanics and never treated seriously in private as well as authorised service stations.

No doubt, “particular kind of sound from the engine” is the definition of knock but it’s not precise and complete. Strictly speaking, knocking is a phenomenon that can be defined as spontaneous ignition or autoignition of fresh charge in the cylinder at various pin-point locations. Autoignition is possible when any fuel reaches to its self ignition temperature by any means of heat. 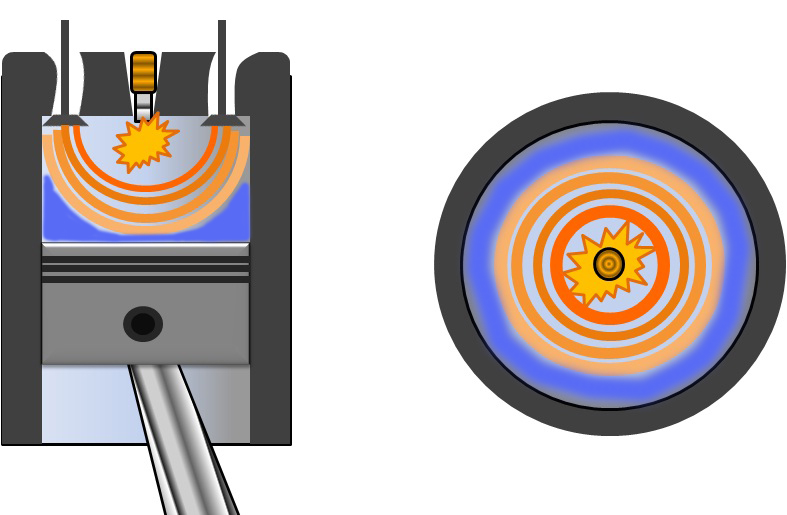 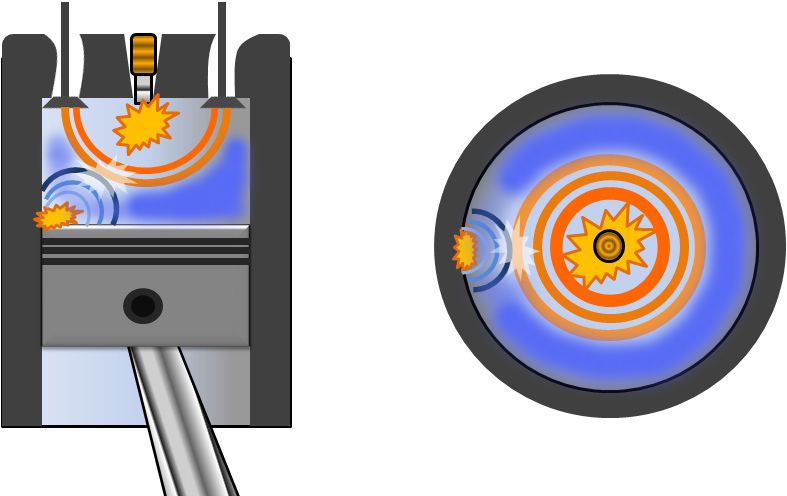 Now suppose, somehow the unburned charge reaches to its self ignition temperature and also has sufficient time to ignite itself. The same case is illustrated in above diagram. The unburned blue coloured fresh charge starts self ignition because of temperature rise. At this moment, two different sparks take place in the cylinder but obviously at different instant. Because of this autoignition, another flame front starts travelling in the opposite direction to the main flame front. When the two flame fronts collide, a severe pressure pulse is generated. This instant but huge disturbance can force the walls of the combustion chamber to vibrate and produces direct blow on the engine structure. This blow is sufficient enough to generate a thudding sound which a human ear can detect. Only because of this thudding sound, it is known as “Knocking”.

The impact of knock on the engine components and structure can cause engine failure. Below photo shows effect of knocking on piston structure. 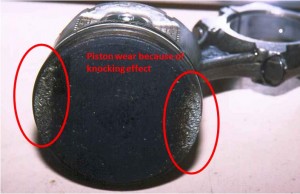 In addition, the noise from engine vibration is always objectionable. The pressure difference in the combustion chamber causes the gas to vibrate and scrub the chamber walls causing increased loss of heat to the coolant. Fuel consumption of engine increases drastically as heat energy is lost during knocking. The same reason also affects the power output which is observable at the time of acceleration.

From the above discussion on knock, it may be seen that four major factors are involved in either producing or preventing knock. These are the temperature, pressure, density of the unburned charge and the time factors. 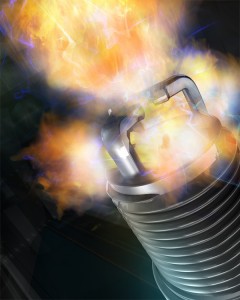 converted in to sources of autoignition after a long run. Furthermore, most of the two wheelers use air cooling which is not at all efficient to cool these two hottest parts. This is the main reason because of which a single cylinder engine could also have knocking problem.

Pressure factor includes the final pressure of fresh charge that it can reach after completion of compression stroke. Obviously, high pressure again converted in to high temperature factor and boosts the knocking process. No doubt, pressure factor is not at possible to control externally. It depends only on design parameters of engine.

Density factor comprises mass of inducted charge and fuel-air ratio. A reduction in the mass of the inducted charge into the cylinder of an engine by throttling reduces both temperature and density of the charge at the time of ignition. This decreases the tendency of knocking.

The flame speeds are affected by fuel-air ratio. Also the flame temperature and reaction time are different for different fuel-air ratios. So tendency of fresh charge to reach up to its self ignition temperature directly depends on the composition of that charge. As the carburettor or injection systems are the only responsible components for fuel-air ratios, it is advisable to keep them cleaned and tuned to avoid knocking.

Miscellaneous factors include location of spark plug and octane value of the fuel. In order to have a minimum flame travel, the spark plug is located at proper place in the combustion chamber. DTSI, DTS-SI and now three spark plugs (Pulsar 200) are few of the examples where efforts have been made to reduce flame travel by igniting the fresh charge from different locations, of course in proper manner. High octane fuel has the higher self ignition temperature and low preflame reactivity which reduces the tendency of knocking.

How to Recognize Knock

Following are some symptoms which can help to identify the knock.

It is very true that one has to develop some skills to identify the particular sound of knock. Many videos are available on youtube where you can have idea about knock sound and you can save your engine by identifying the knock in preliminary stage. I hope this will be useful to you all in future. Waiting for your valuable comments.