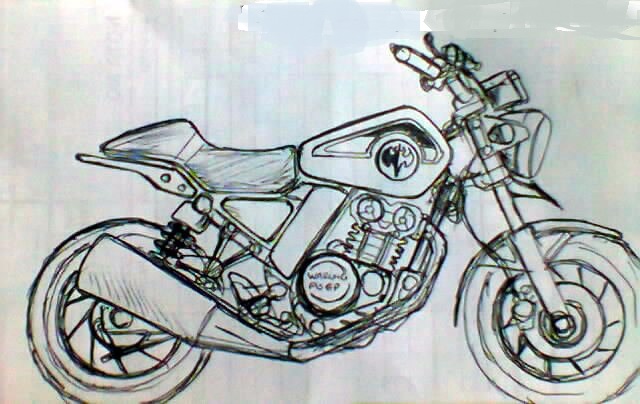 Kawasaki is reportedly working on a new 150 cc mill which will be used to power two new motorcycles, a naked roadster and a Scrambler.

Folks at MoreBikes have even released a sketch rendering of the upcoming Scrambler-ish bike which looks pretty interesting. They say this information has been leaked by some ‘loose-lips’ and the following sketch, according to their sources is pretty much spot-on with what is under-works!

It features a motorcycle with round headlamp and angular fuel tank. It carries conventional shock absorbers upfront and dual-shocks at the rear and then there is the chunky exhaust canister along with broad tyres.

Quite clearly if this news is true, Kawasaki is targeting the developing markets which may also includes ours. This will be the smallest scrambler we know of and may open a new segment of motorcycles all-together! Expect a 150 cc liquid cooled fuel injected engine producing decent torque and power output to take you places!

This can further be extrapolated to slightly bigger capacity models as well. The rumoured 150 cc Scrambler, though is still far from reaching production and is expected to hit the markets only in 2017.

This bit, however, is emanating from the web and there is no concrete basis to it yet. These may be the first hints of the two Kawasaki motorcycles or it may end up being a complete hoax; so take it with a pinch of salt…