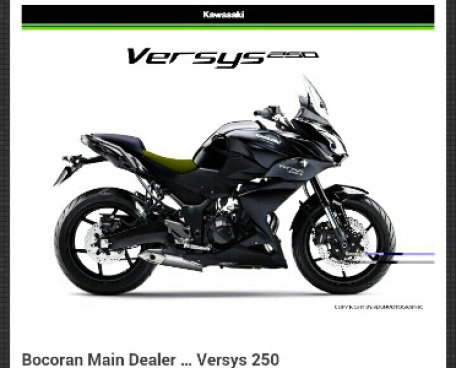 Rumour mills about Kawasaki’s upcoming products have been spinning for like forever. A new entrant to the yarn has been a quarter litre version of the Versys! Expected to be powered by the 250cc twin cylinder engine borrowed from the present generation Z250, the bike is set to be a prime offering by the Japanese motorcycle manufacturer in the adventure segment along with many others that are in the pipeline.

The Z250’s parallel twin 249 cc liquid cooled mill produces 32 PS of maximum power at 11,000 rpm and 21 Nm of peak torque. While the engine is a gem, one gripe a few riders have had with the motor is the spread of power and torque in the higher rev band. The Adventure tourer will, however, need a lot of tweaks so that the motor packs in a good low end and mid range, even if it comes at the cost of the high-end range.

A rendering of the bike has been posted by the folks at TMCBlog and the upcoming speculated motorcycle looks a cracker. With inspirations drawn heavily from the present gen Versys 650, the bike is portrayed with a continuation of the half fairing which extends to cover a portion of the engine.

Again if Kawasaki does end up launching the Versys 250 there are high chances of the bike to percolate to India considering that the manufacturer has begun to see us as an important market.