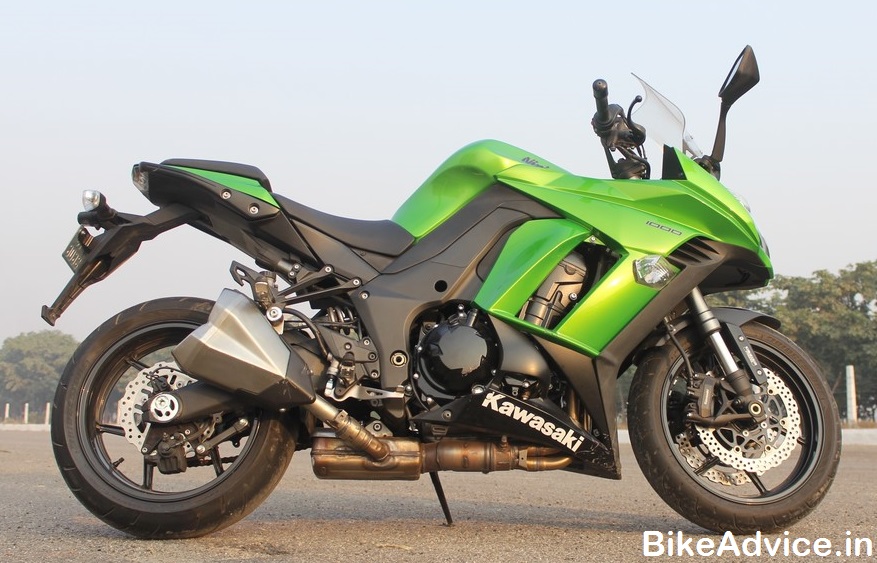 Is Kawasaki Ninja 1000 the perfect all-rounder? Without being boring? Or is it just another option among the zillions of inline fours out there? We find out… 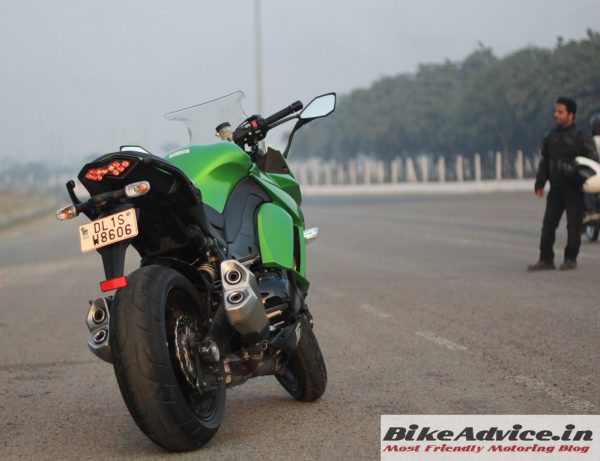 There are six Hayabusas, a ZX-14R, a ZX-12R, an R1, two CBR 600s, a Yamaha Royal Star, a couple of Harleys, a Rocket III, and an Intruder within a two-km radius of my residence. No, I don’t live in a posh, high-income-group locality; in fact, it’s one of the few places in the National Capital Region where you can still get a three-course meal for two under three hundred bucks. In other words, what we save in food money, we invest in motorcycles. Or real estate. Or more food. 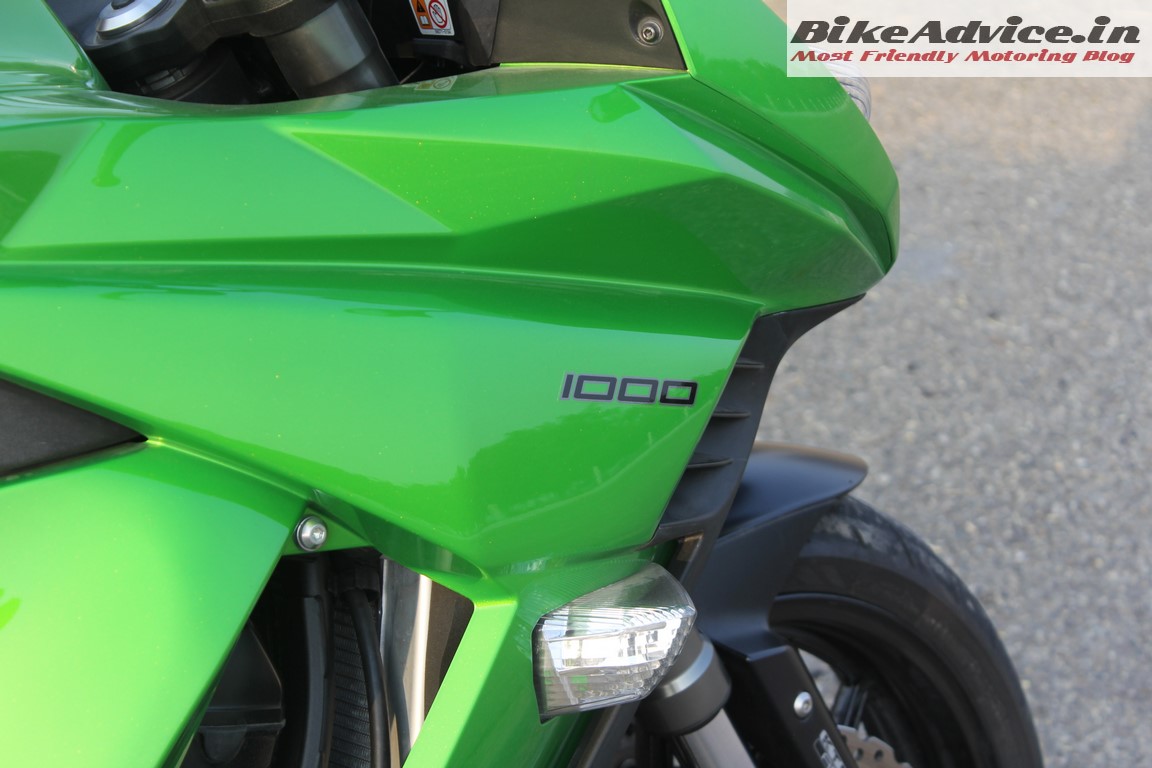 Anyway, all those machines in and around our locality, save for the cruisers, have one thing in common – none of them has a stock exhaust system.  So when I brought the Ninja 1000 home I was pleasantly surprised to get reactions like, “this one sounds great! Not at all coarse like the usual ones…” I wanted to tell them that it’s the stock bikes that are generally categorized as ‘usual’, but I realized that in present times, when everyone is getting megaphone silencers (what an oxymoron!) for everything from 50 cc mopeds to 1,500 cc missiles, passive listeners (read ‘neighbours, other road users, and most other forms of life’) now certainly have begun to appreciate the music that emanates from factory-fitted pipes. 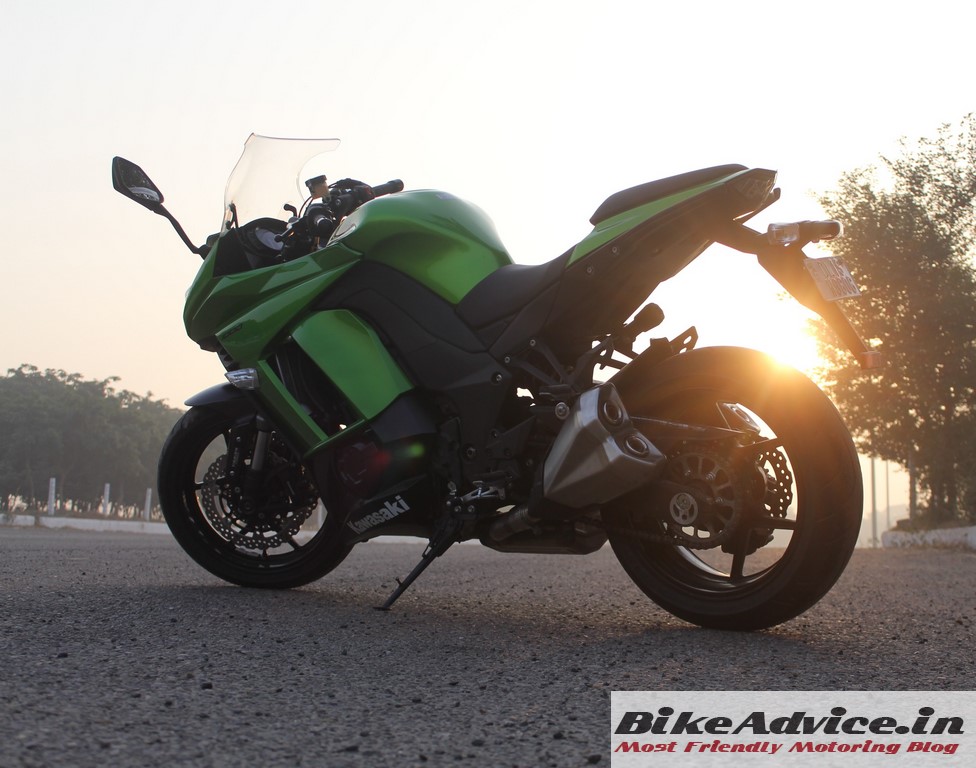 Though I don’t endorse crowd-appeasement, being considerate is another thing that we can all try sometimes, what with so many dorks already running amok with aforementioned exhausts. So yes, the Ninja 1000 sounds glorious, but never does it get loud sadistically. Blipping the throttle a few times on a Sunday morning won’t cause the elderly folks in your neighbourhood to spill their tea on to their pyjamas, but doing so in traffic will certainly have that moron behind the wheel drop his phone and mind his lane… 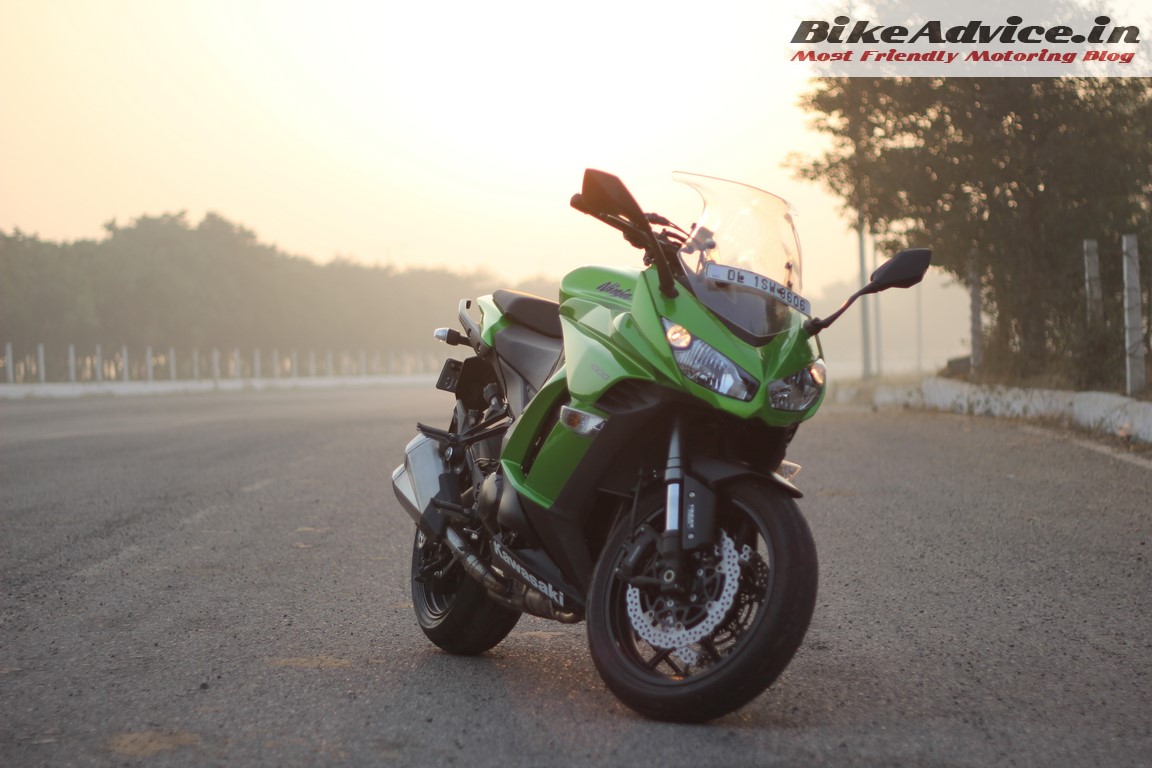 The point is, ladies and gentlemen, that all inline-fours sound great and the Kawasaki Ninja 1000 is no exception. It shares its motor with the Z1000, and those 1,043 ccs, even before you engage the crank to the rear wheel, send a strong message through your auditory nerve that you are about to play with some serious machinery here. 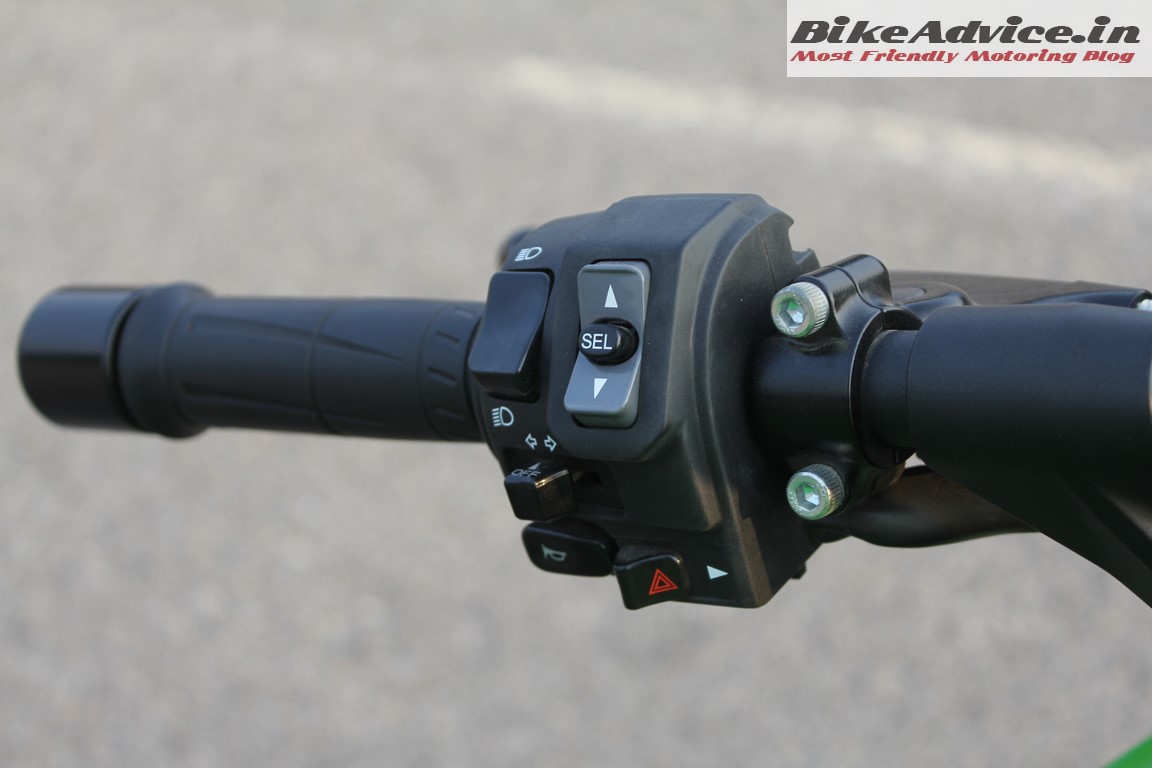 That is why, I first chose L (for Low) from the two power modes on offer, and immediately realized that even 70 per cent of 140 bhp is not really low during rush hour, especially on a bike that does not belong to you. Therefore, I again fiddled with the toggle switch on the left ‘bar grip to select Level 3, the most intrusive setting, of traction control. 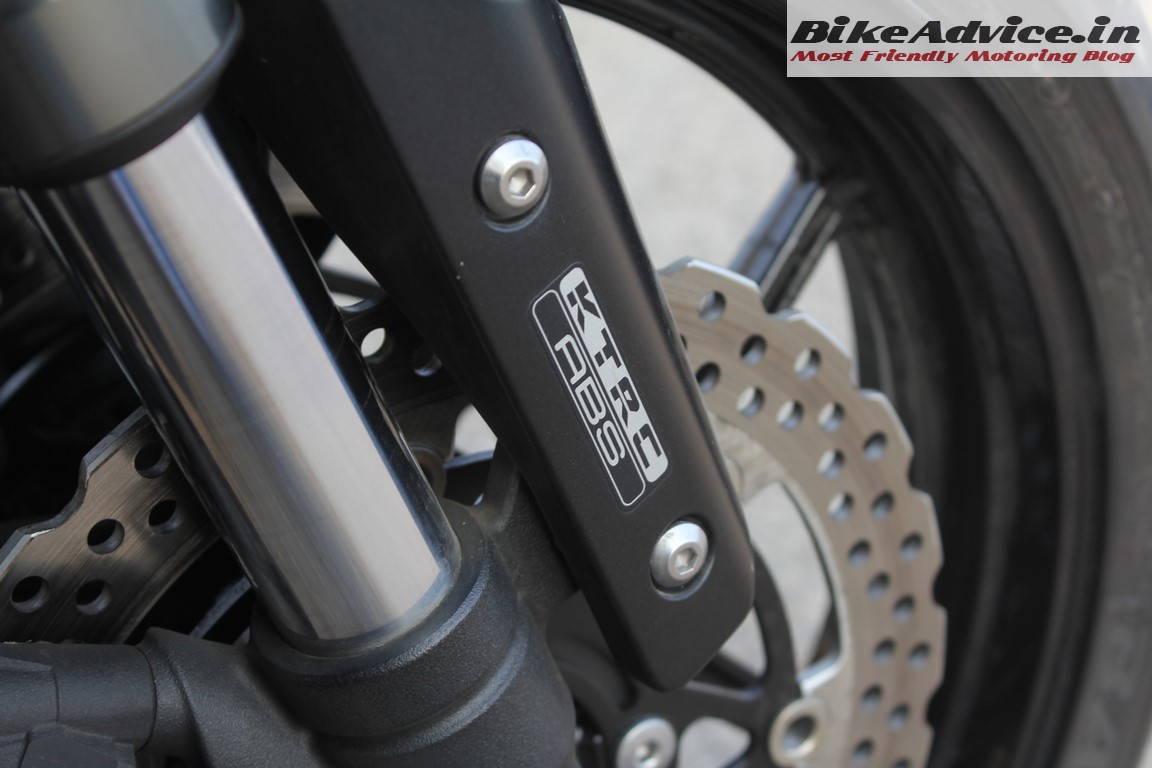 With all electronic aids set in full coward mode, I gingerly started my journey again from the Kawasaki showroom in South Delhi to my place in, er, South Delhi – a distance of just 17 km. For people who are not really acquainted with the capital’s geography, let me tell you that irrespective of the cardinal point, and despite having the best roads in the country, Delhi becomes this gigantic parking lot on a bad day. Seasons change; you grow old, and a few species extinct by the time you climb and get down a flyover. Like any other metro then. A Kawasaki Balius should be the weapon of choice in such situations, not a litre-class behemoth! But ‘work’ has to be done, and the Ninja 1000 had to be tested in city commute too, so “bring it on!” I said. 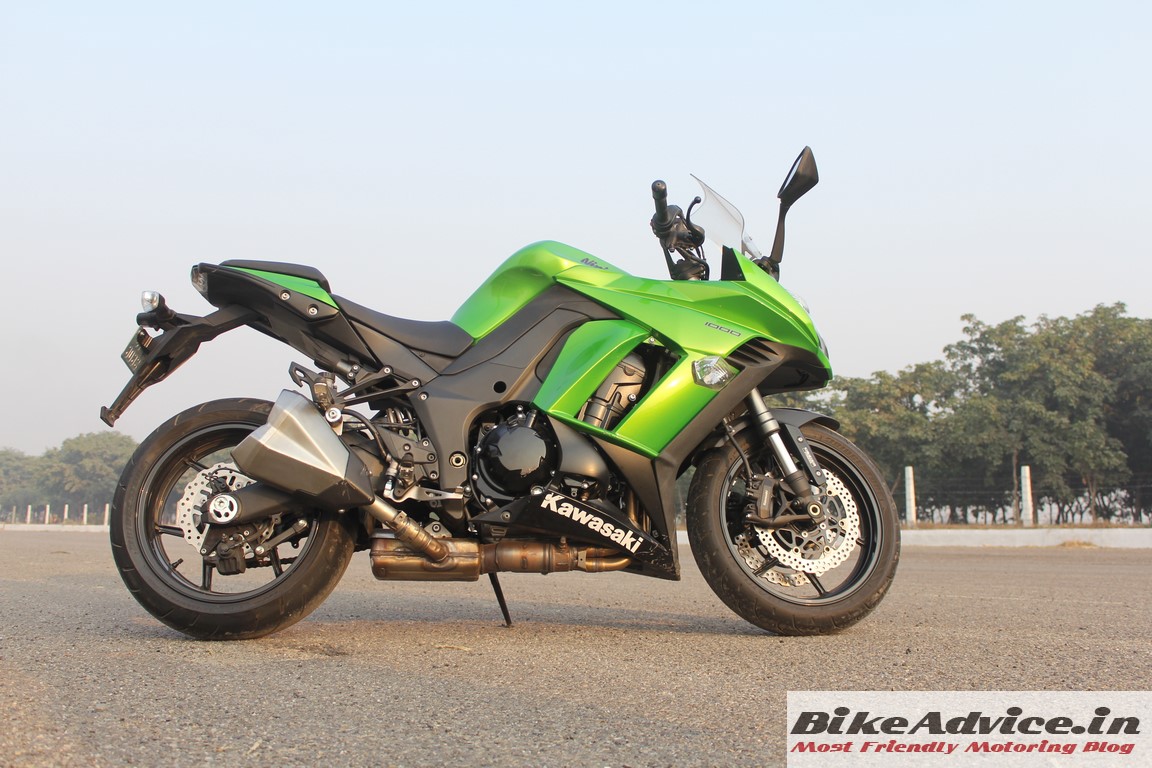 The seat height of this Kwacker at 820 mm, same as the KTM RC390’s, is on the higher side for an average Indian. However, the new (2014 onwards) three-piece aluminium subframe makes the mid-section of this Ninja narrower than earlier, which allows for a straighter reach to the ground. Therefore, despite being shorter than Pedrosa, and being lightyears behind him in skills, I was able to survive the peak hour ordeal without any wrist pain or leg cramps. 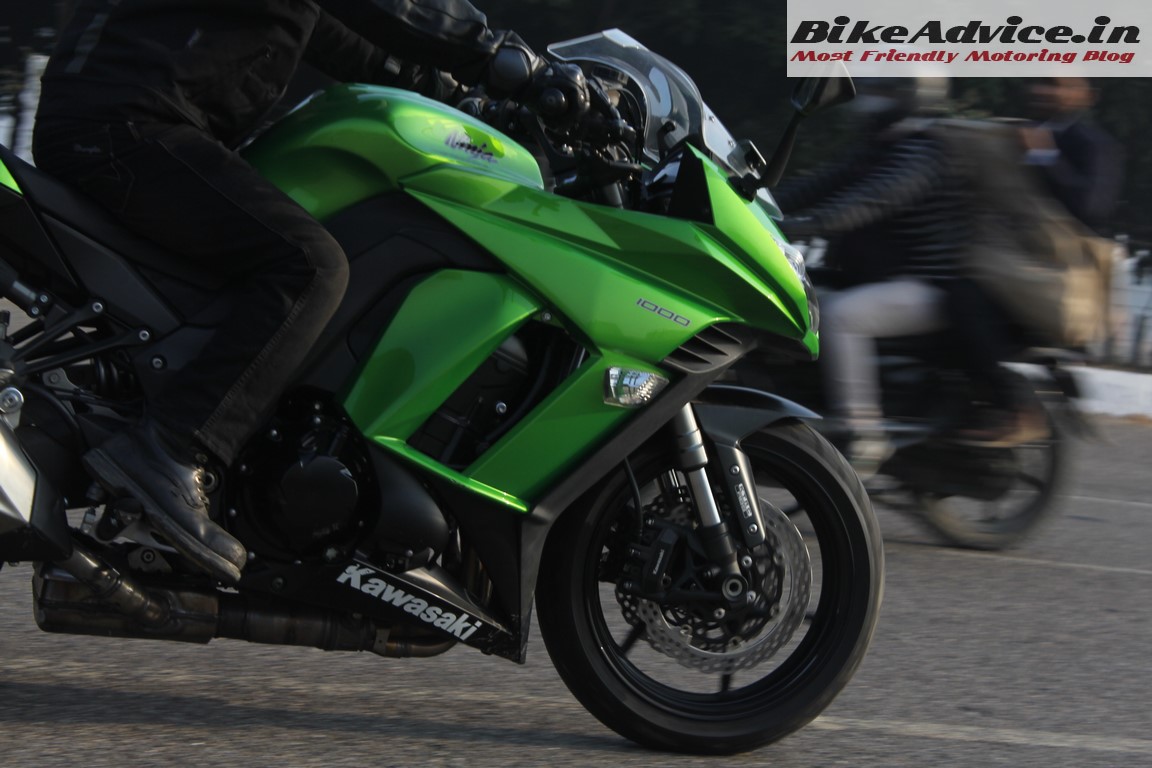 That also speaks volumes about the perfect ergonomics Kawasaki has blessed the Ninja 1000 with – you don’t sit in an inconceivable yoga posture on this one. The clip-ons are placed higher, so the tank does not kiss your pecs when you’re not in the mood, and together with the not-so-aggressive footpeg-position they offer a relaxed riding position just like a sport-tourer should. Also, the windscreen angle can be adjusted by hand and offers three positions. Nice. 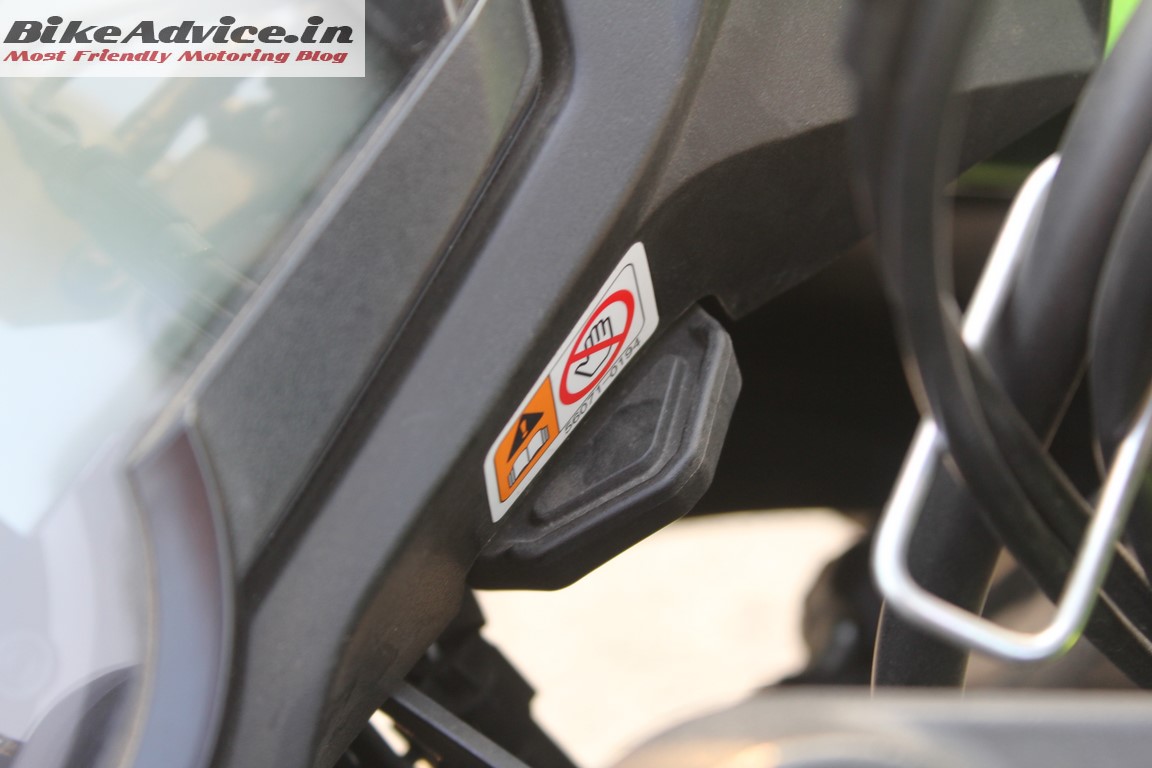 So while I was still cursing the traffic situation that evening, the Ninja on the other hand was unfazed. It did not overheat at all, and even if it did, I didn’t feel it. And I wasn’t wearing any exhaust-wrap tapes as socks either… The Ninja also did not threaten to wheelie and break the rear windshield of the car in front – that throttle response is the smoothest that I have experienced yet. The fuelling is oh-so-perfect and, more than anywhere else, it actually matters the most in stop-and-go kind of traffic. I didn’t have to slip the clutch ever, and could actually release the clutch lever completely in first gear to roll on – no snatching, no lurching, no drama; just butter-smooth flow of motion. 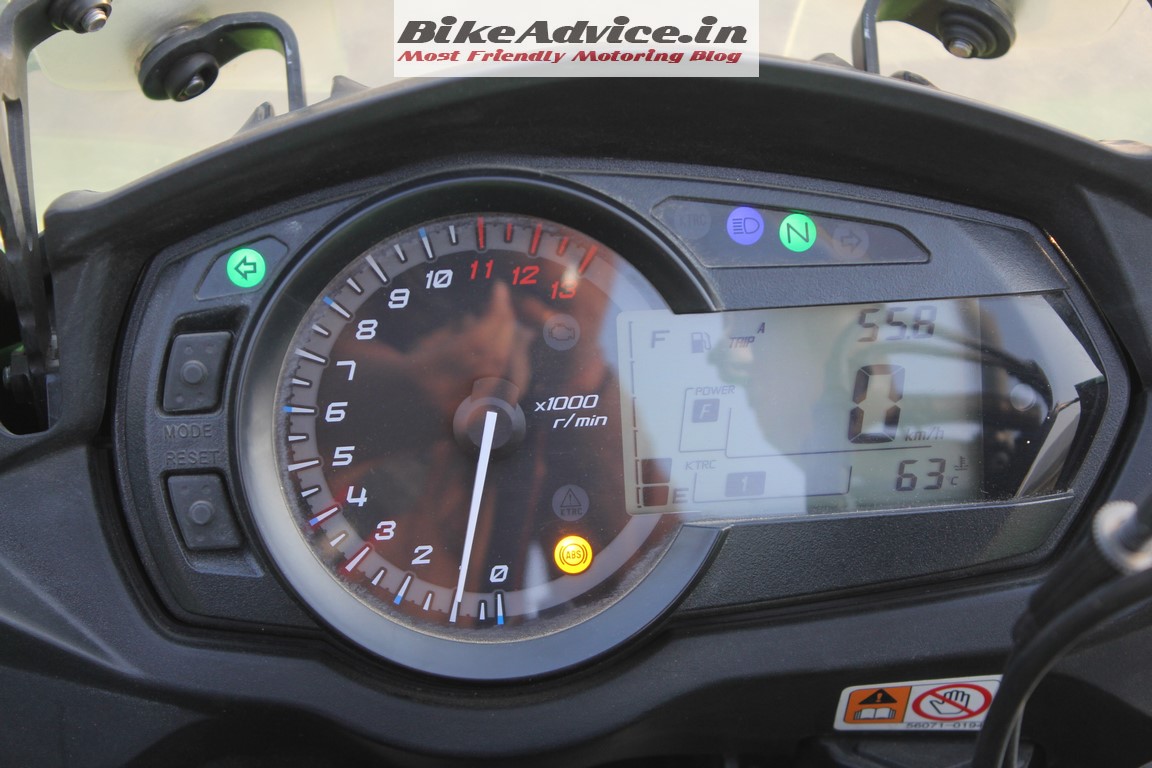 And then the traffic thinned… Power mode changed to F (for Full), traction control at 1, and a quick twist of the right wrist was all that was needed to immediately forget what had transpired in the last 45 mins. The blurring scenery, accompanied by a vociferous soundtrack comprising a throaty intake roar and a bassy shriek from those quad exhausts, makes you feel that you can do this all day, 365 days a year; social life be damned! But, thanks to the smoothness of the motor, and to the electronic aids working overtime even at their least intrusive setting, there is a sense of calmness that prevails. Don’t get me wrong; the bike is insanely quick and fast, but unless you hold a Doctorate in Moronology, the green monster will forgive most of your mistakes in your pursuit of speed. And because of that, I’ll stick my neck out and say that this can be your first superbike for all reasons and seasons. 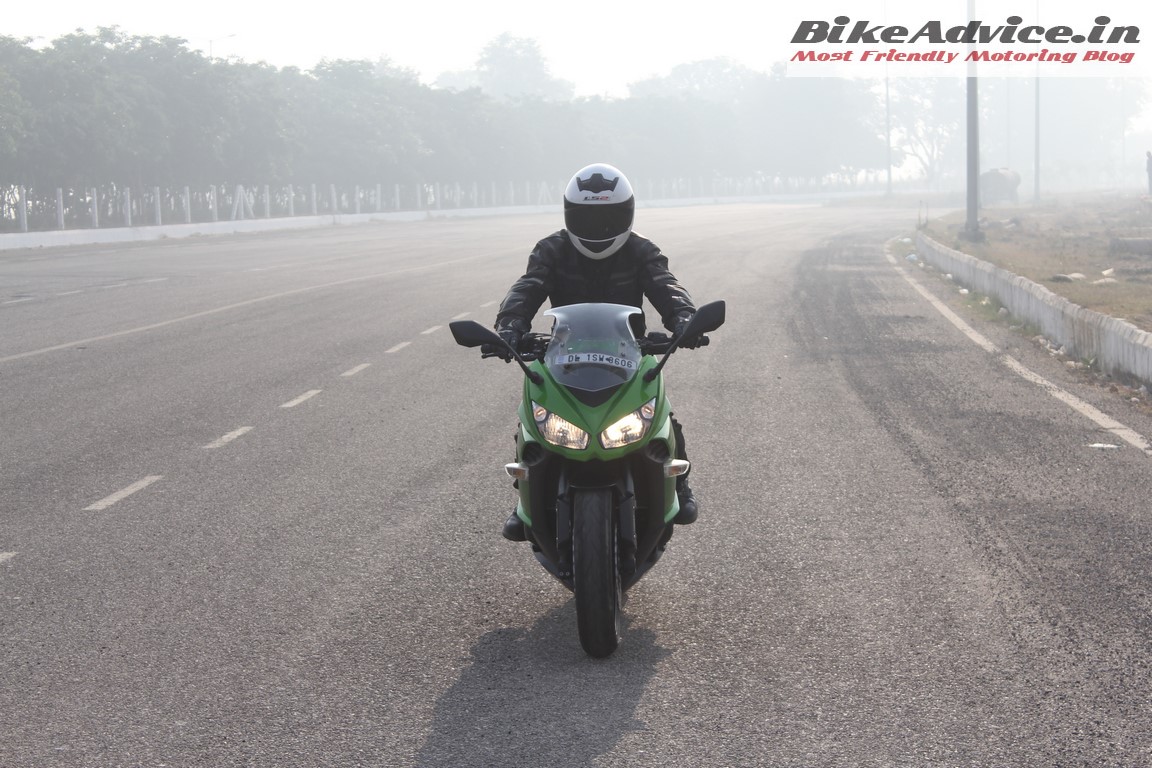 Again, make no mistake people – under that sport-tourer guise lies a proper superbike that fully justifies the ‘Ninja’ moniker. For reference, the mad Ninja ZX-10R churns out 112 Nm at 11,500 rpm and the Ninja 1000 puts out 111 Nm at just 7,300 rpm! That basically means the Ninja 1000 has so much usable torque that, in 98 per cent of real world riding, it will keep the mighty ZX-10R, and most other 200 bhp litre-class track weapons, feeling flustered!

Of course, the Ninja 1000 cruises effortlessly as well – 100 km/h on the speedo translates to about 4,300 revs on the tacho in 6th gear.  Bring the bike to 40 km/h and just power on to take it back to three digit speeds without any downshifting at all! Who needs a VFR 1200 now? The top speed of this Ninja has been electronically limited to 250 km/h, which should be more than enough for most occasions… 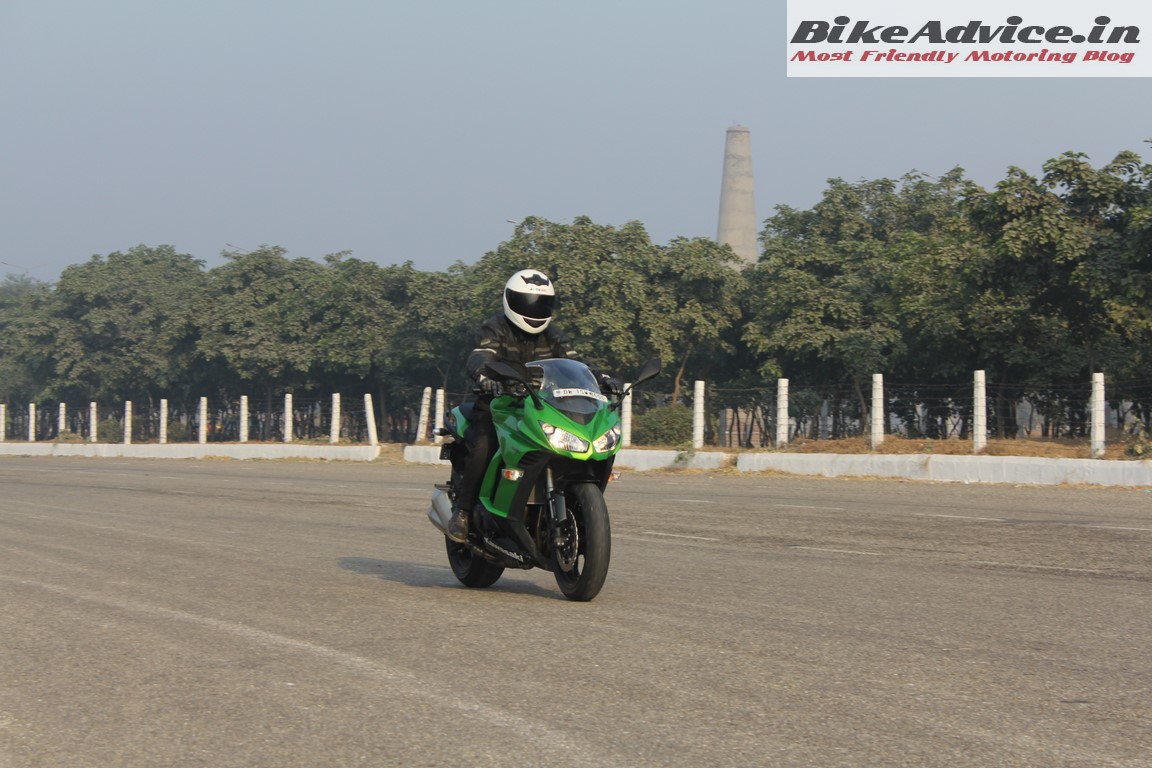 The Kawasaki remains beautifully stable at all speeds, both in a straight line and corners. But, it does not like sudden directional changes; it can be done, albeit with some muscle. You pick your line into a corner, and the Ninja will follow it assuredly; just don’t expect it to behave like that lithe creature that we call the ZX-10R… Moreover, you don’t really attack corners in a 500 km ride like you would on a five-km racetrack. But if you do, the aforementioned traction control would definitely help in keeping the rubber side down. And so would the ABS (Anti-lock Braking System). 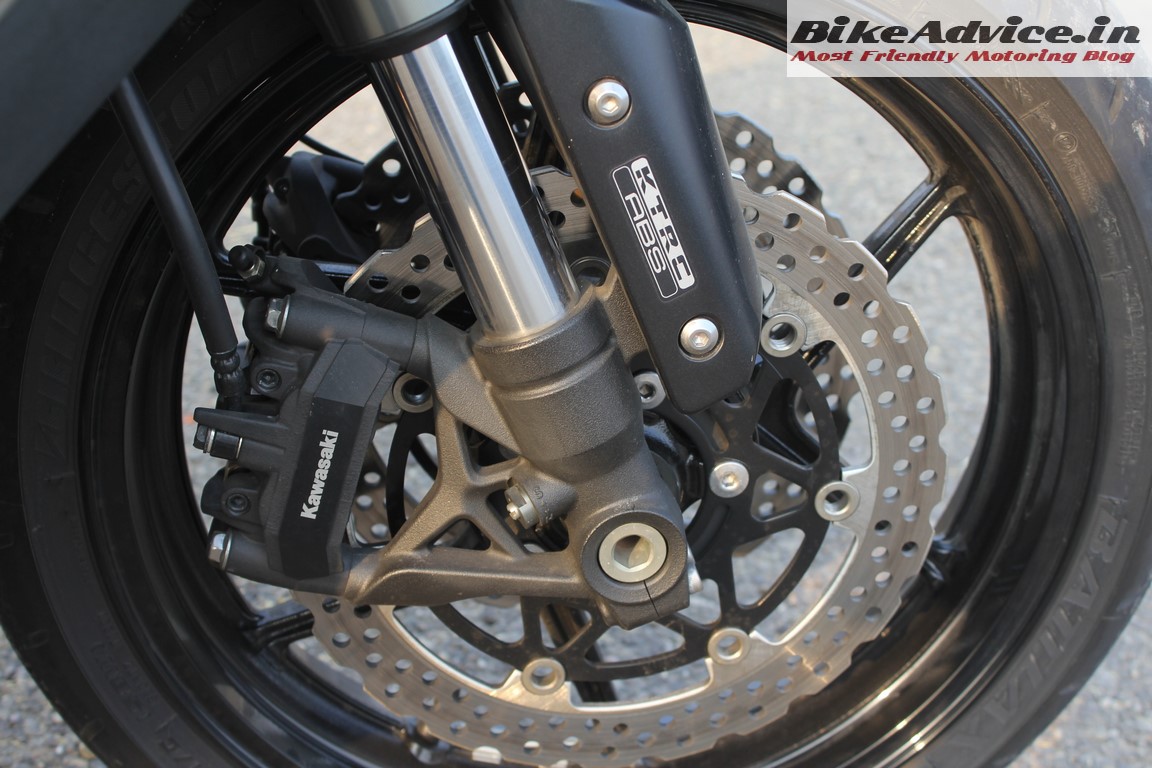 Talking about brakes, the front anchors are phenomenal, to say the least. The radially mounted monoblock calipers grab the two semi-floating 300 mm petal discs in a manner that not only results in eye-popping stopping power, but also in great feel at the lever (adjustable for five span settings). 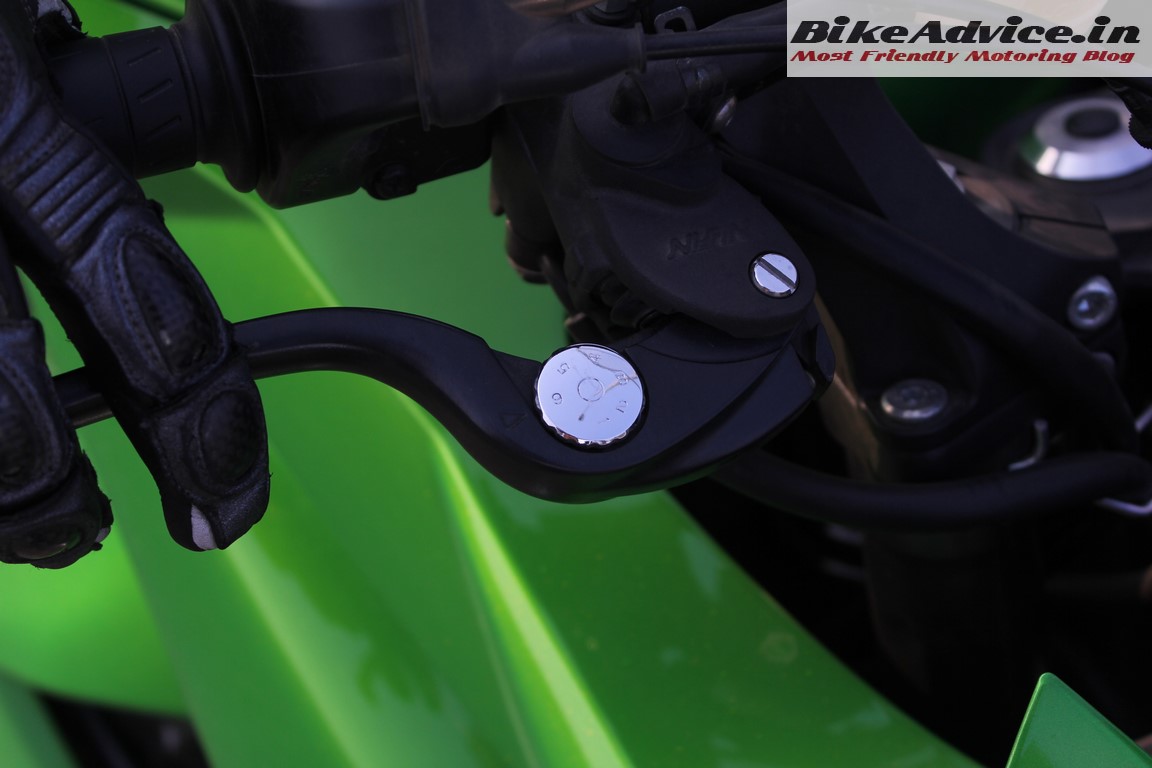 At the rear, the 250 mm rotor does provide a nice bite but lacks in feel. Thankfully, unlike the KTRC (Kawasaki Traction Control system), the ABS is not as intrusive and only kicks just in time to remind you of your insurance renewal date. Also, the 120/70 and 190/50 Bridgestones at the front and rear, respectively, provide superb levels of grip. 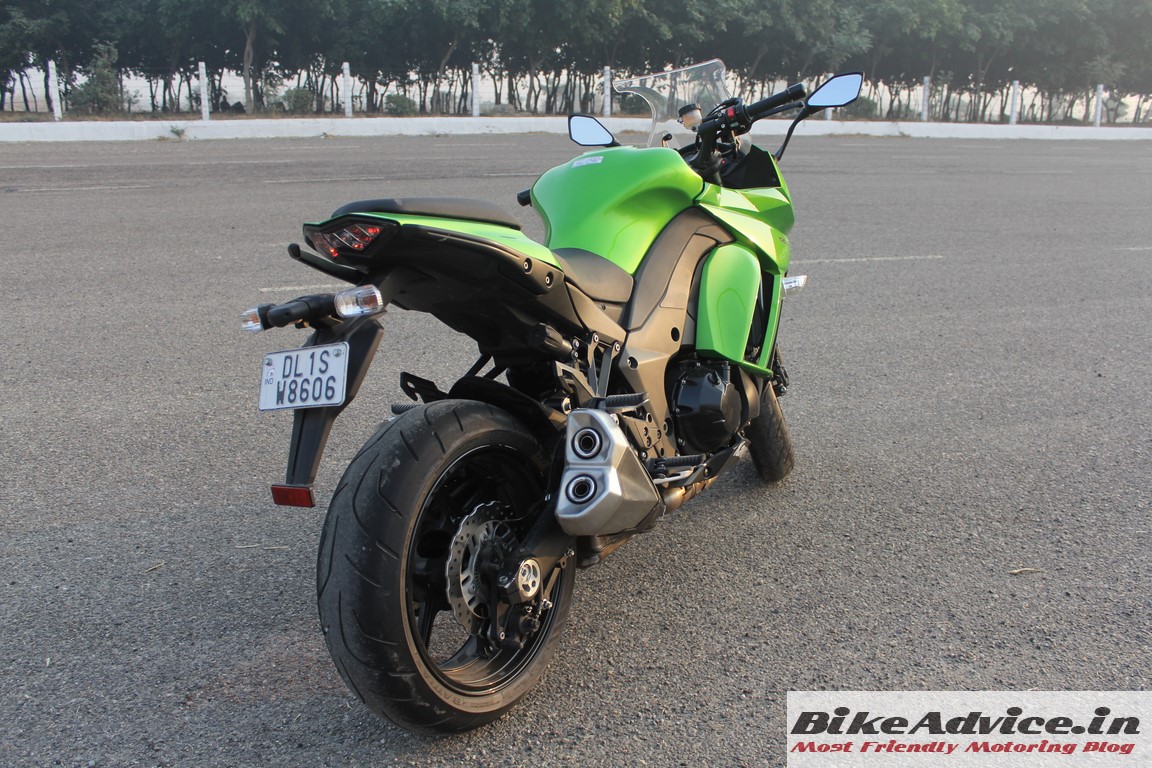 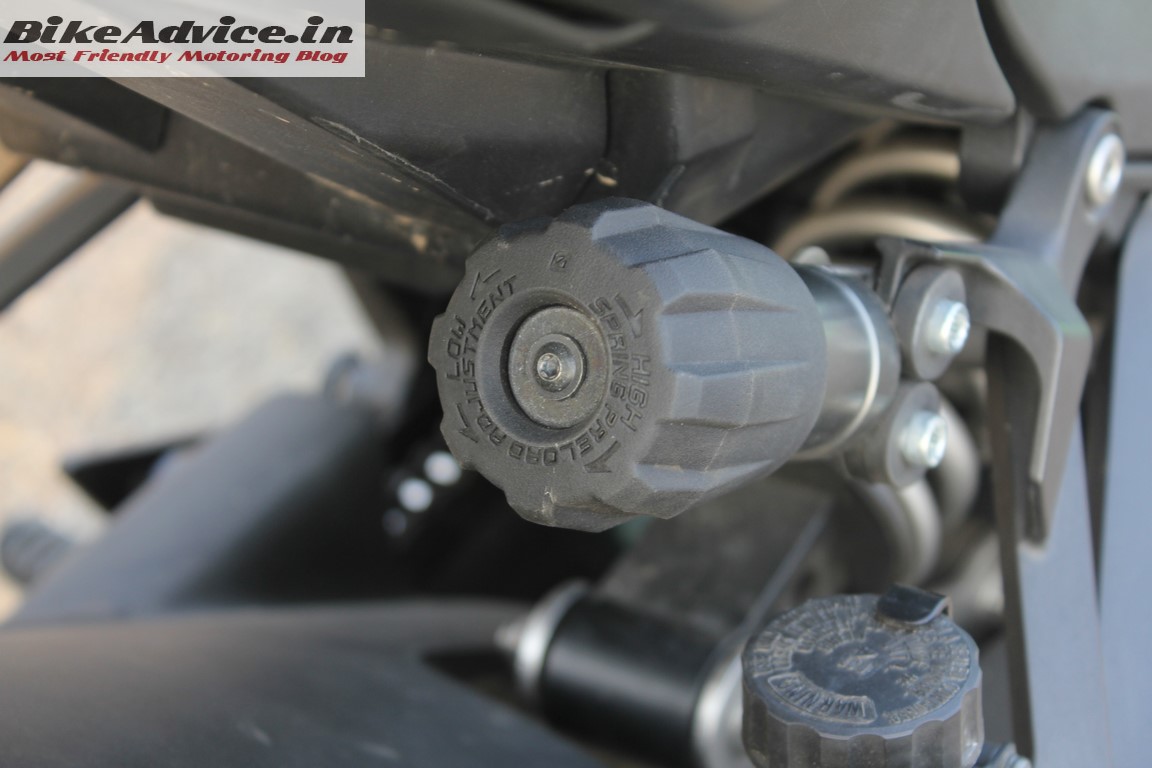 The Ninja 1000 rides well too, and that’s on stock suspension settings. You can play with the fully adjustable (for compression, rebound, and preload) 41 mm front forks (inverted) and the semi-adjustable (for rebound and preload) rear monoshock to find your sweet spot. I preferred to leave the settings untouched as I found them to offer a compliant ride – say, more or less in Ninja 650 territory, which is nothing short of great for this segment! What’s not so great is the fact most on-lookers might mistake it for a 650. While that may be an ego boost for the 650 owner, it certainly does not sound pleasing to the 1000 buyer. Personally, I couldn’t care less; in fact, I would prefer my bike to draw as little attention as possible, especially in open parking spaces… 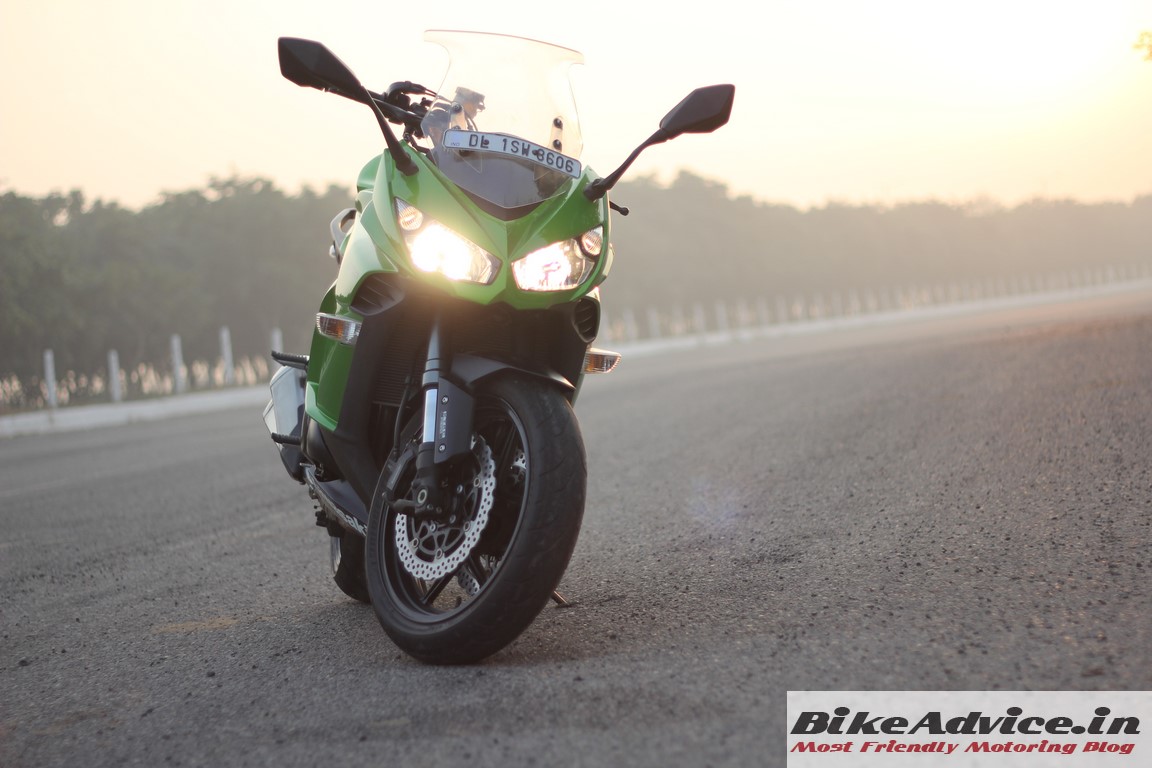 The only real shortcoming that I can think of in this bike would be the headlamps. Come on Kawasaki, the old KB100 illuminated the road better! Okay, that was an exaggeration, but seriously, the headlamp performance of the 1000 makes you think that you are still riding in the 1980s. A bike that can cover 400 meters in 11 seconds, and one that would have travelled 250 meters before coming to a complete halt from 250 km/h, should have the brightest set of headlamps on offer, period. Agreed, you would not be travelling anywhere near that speed on our roads, but at even half that speed, you need better lamps, and you don’t buy a superbike to ride at 60 km/h, unless, of course, you are a poser… Other than that, I can’t think of anything else that needs improvement in the Ninja 1000. Alright, I am not a fan of its styling, but I know many people who quite like the way it looks. 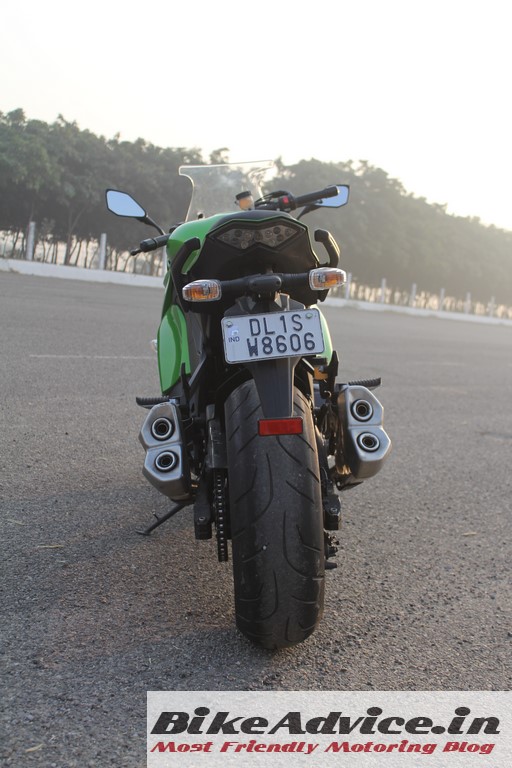 It is also interesting to note that the first ever Ninja, also the world’s first 16-valve liquid-cooled inline four, carried the ‘GPz900R’ sticker in 1984. It was Kawasaki’s staff in USA who suggested the name – Ninja. I am sure even they wouldn’t have imagined the name to become synonymous with sportbikes for generations to come. Kohei Yamada, its designer (and also the man behind the Ninja H2R & H2) acknowledges that, and had said sometime back that it was the most significant motorcycle that Kawasaki has ever designed! The GPz900R or the Ninja 900 continued to be in production until 2003. The GPz1000, the first ‘Ninja 1000’, actually came in 1986 and got transformed into the first ‘Ninja ZX-10’ (without the ‘R’ suffix) in 1988. 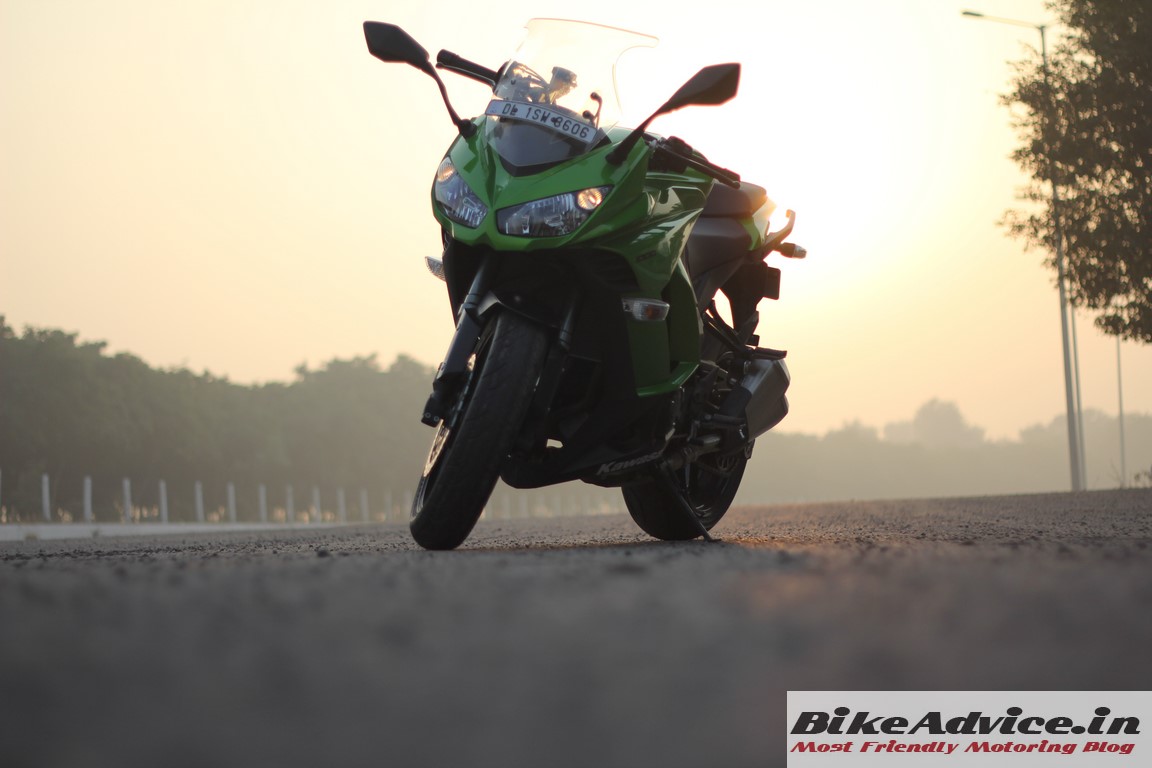 So, in more ways than one, I feel it is the current Kawasaki Ninja 1000 that gets the closest to the original number in essence: the best all-rounder with the ability to punch a lot above its weight. I say that because of all the superbikes, sport-tourers, hyperbikes, etc., currently available in India, there isn’t one that does more things in as accomplished a manner as the Ninja 1000. It would keep up with the best of the lot on the racetrack and show them the impolite finger on the road. It would tour comfortably with the ‘Busa and ZX-14R while being much easier than them to manoeuvre around. All this, while still returning around 300 km to a tankful of 19 litres. And at INR 12.45 lakh (ex-showroom, Delhi) it’s a lot cheaper than all of them. 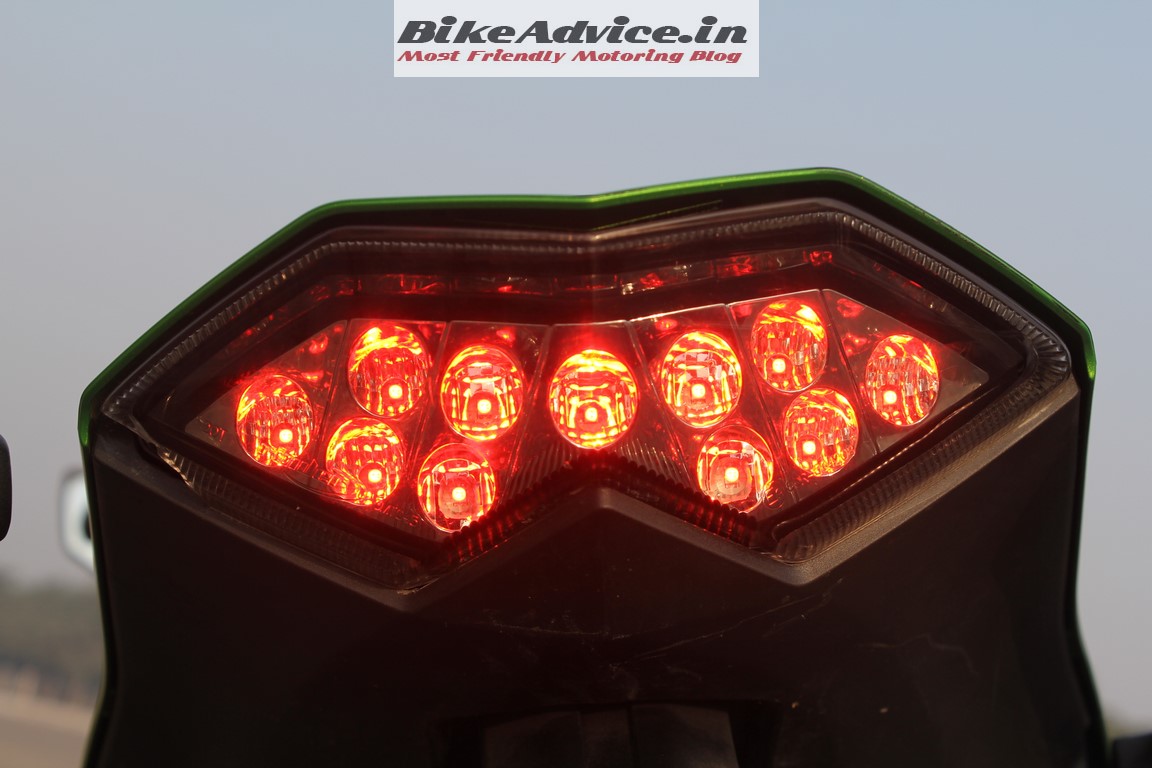 If you want any more practicality, efficiency, and value, go take your boring self to the nearest Honda showroom and buy a diesel City. Two wheels may not be your thing…