Kawasaki is definitely on a roll with its Kawasaki Ninja 250R selling like a piece of hot cake. As a matter of fact, Kawasaki has marked the sale of 1000 Ninja 250R motorbikes in India. Kawasaki is already jumping in excitement as they just got more than what they expected. With this remarkable achievement Ninja 250R has become the first multi cylinder sports bike in India to sell of 1000 units in a single year. 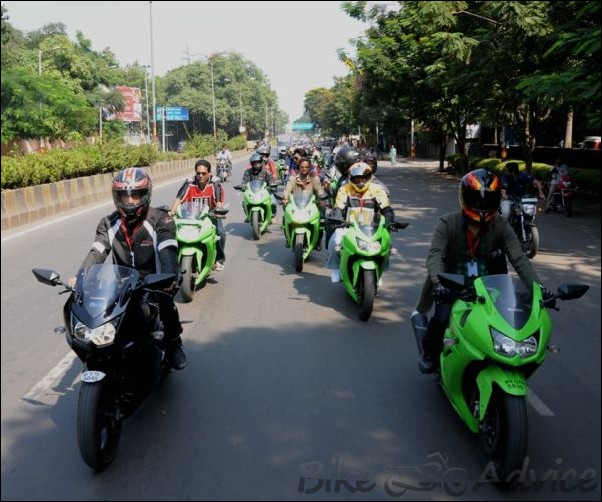 Kawasaki Ninja 250R also has the reputation of world’s largest selling 250cc bike; this achievement has added another feather in its cap. Ninja 250R is exclusively retailed in India by Bajaj probiking (an exclusive retail outlet for premium bikes). The retailer has also got 32 showrooms across 30 cities in India.

To mark the sale of its 1000 Ninjas in India, Kawasaki organized a rally in Hyderabad wherein the owners of the bikes are called to participate. In Andhra Pradesh alone, Bajaj probiking has got three retail outlets located at Hyderabad, Vishakapatnam and Vijaywada. Overall the proud owners and Kawasaki officials were overwhelmed at the occasion.

Speaking on the success of the Ninja 250R Mr. Amit Pawar, the zonal Head of Bajaj Auto said that the bike received a tremendous response from over the country and the success of the bike exceeded the company’s expectation. He further added that the product’s appeal and excellent after sale service from Kawasaki and Bajaj Probiking has helped the sale of the bike flourish. Mr. Pawar further said that Bajaj is keen to continue their efforts to increase the sale of Ninja in India.

It would not be wrong to say that Bajaj and Kawasaki are growing towards a better future and definitely a better bike manufacturing era. Kawasaki takes this as an achievement because there are many competitors of super bikes in the market. Overall, we wish both Bajaj and Kawasaki all the very best for near future.