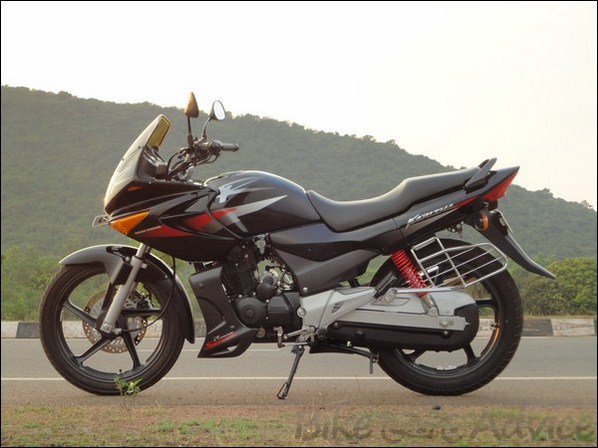 Hi, here is Umesh Prasad Rout from Bhubaneswar, Odisha. I am an assistant professor of Computer Application in one of the premier Engineering College of Bhubaneswar. Although I am not a teenager (I am 32), I love biking.

My first bike is Hero Honda Passion Plus which I used to ride for going to the office. After long years of riding experience in Passion Plus, I switched over to Karizma R. I like to share my biking experience with the legend.

The Need for a Performance Bike

After few years of riding in Passion Plus, I felt it is lacks pick up, speed and handling. Gradually I became inclined towards performance bikes as a good pick up bike is a necessity in today’s traffic condition. I personally needed a faster bike to reach office in time.

The Decision to buy Karizma

While hunting for a performance bike I was impressed by the looks of Karizma which is eye catching (particularly yellow one). While coming to office in Passion Plus I used to see one or two Karizma every day which looks unique. I constantly watch the bike until it disappears from my vision. Gradually it became my dream bike. 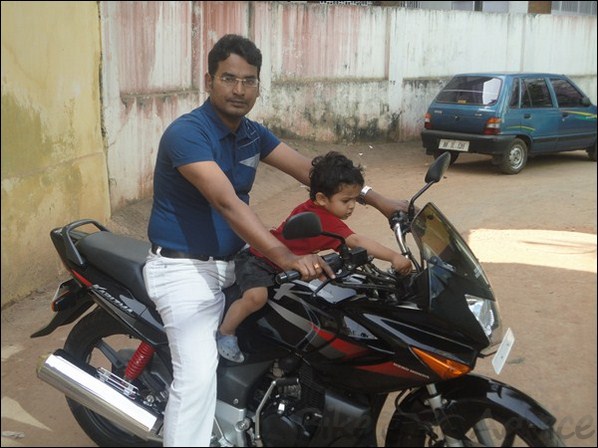 I made some research on performance bike from internet and other sources. Bike Advice has a great role in choosing my bike. I had two options other than Karizma: Yamaha R15 and Bajaj Pulsar 220. P220 lacks reliability and I donot like looks of the bike. Yamaha R15 is good but I don’t like the front (dual head light)and it is a small bike. Both P220 and Yamaha R15 did not suit my profession. Reliability and looks and performance were my decision parameters. Hence Karizma R was left as the only choice.

I made a booking for Karizma R (yellow) in the nearest Hero Honda showroom. But I came to know that it was a waiting period of two/three months or even more after launch of ZMR and  Karizma R not being a commuter is not readily available. 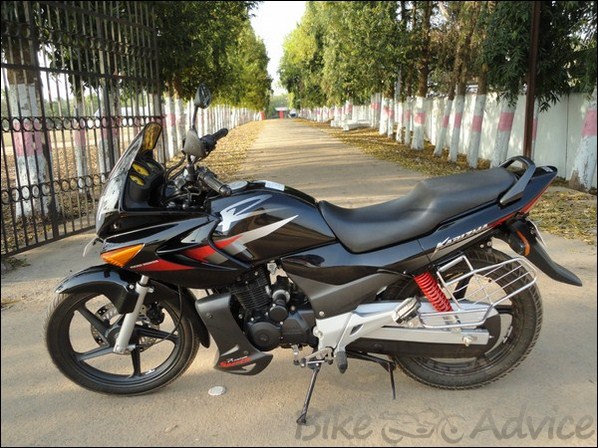 I then tried to get the bike from all nearby Hero Honda dealers, but all have the same reply. I was very disappointed in those days. Finally I talked to the Managing Director of the showroom and told my problem. He suggested me take ZMR but I did not like the looks of ZMR and according to the price it has no such improvement in performance than Karizma R. But finally he promised to bring two units of Karizma R. I was relaxed then.

On 21st October I got a call from Hero Honda dealer to take the Karizma R. The next day (22nd October 2010) was one of happiest day of life as I purchased my dream bike on that day. But I got a black one instead of yellow. Still I was very happy.

I was a bit nervous before riding Karizma as it is a big and powerful bike. Initially I faced problem in gear shifting and finding neutral as the pattern was different from my old passion plus. But within few hours I got used to and it became pretty easy. Most of my students appreciate my bike so as colleagues. From my research and 6000km of riding experience in Karizma R I am writing this Review.

Looks: Karizma is a head a turner despite of its age. It looks good in all colors. But it looks awesome in yellow color. The looks attracts every age group starting from kid to old. Even my two year old son prefers Karizma R over Passion Plus. 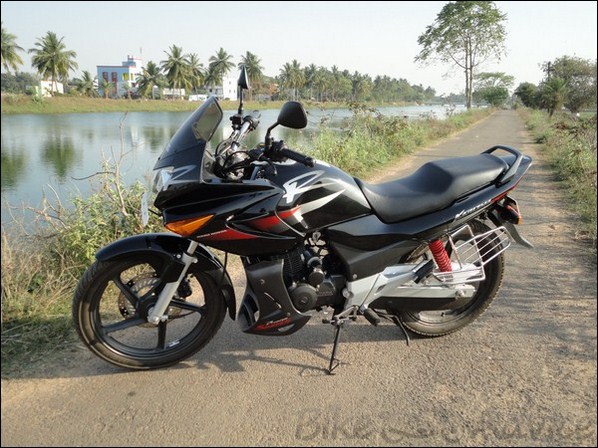 Truly said in Bike Advice review and my other reviews 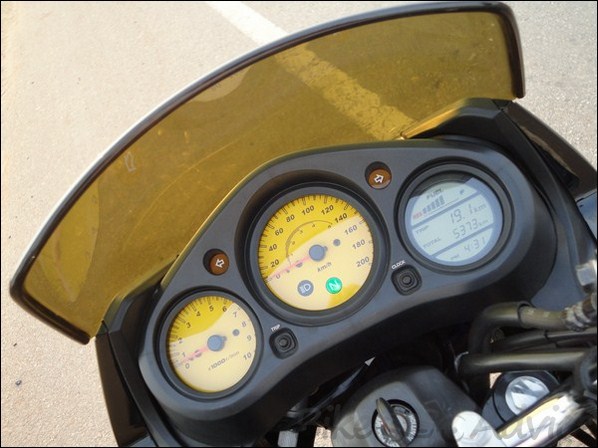 The 223cc mill generates 17bhp Power and 18.35Nm torque which is enough for Indian roads. The rock solid engine can run 24×7 without any problem. 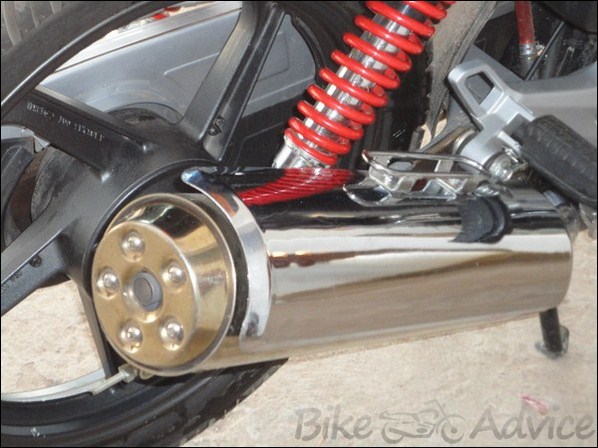 Those who criticize Karizma for less power in comparison to cubic capacity, for them my explanation is it is for long engine life as their no stress on engine. It has both electric and kick start option which is useful in very cold condition.

Acceleration of Karizma R is amazing though not the best in its segment. The adrenalin rush can be felt from second gear onwards. I have dragged the bike up to 130kmph (on Speedo) after run-in period. Karizma vibrates a little after 120kmph.But up to 115kmph it is butter smooth.Up to 110 it is quick, after that it takes time to accelerate.

In 5th gear the speed I have achieved in various rpm are: 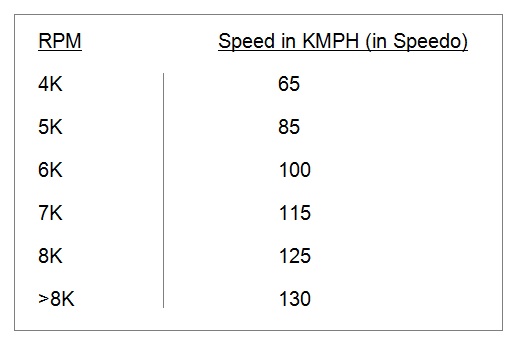 Karizma is not the fastest Indian bike. But what is use of that speed in Indian road condition? If handling in such speed is poor, it is very dangerous.

Karizma R is fast but not furious. Thanks to the large disc brake. The brake is quite spongy. Though the rear one is drum, It works wonderfully. Actually rear brake has less responsibility in stopping the bike. 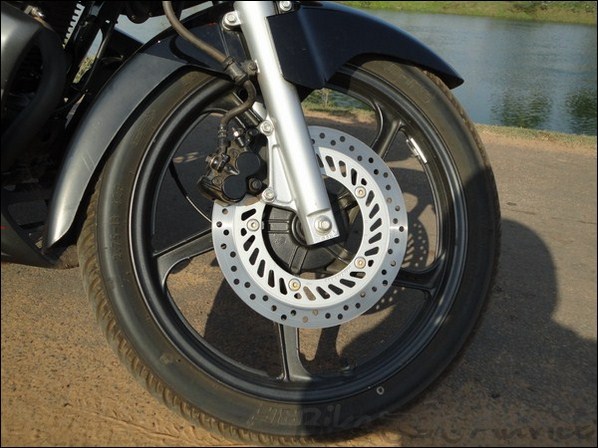 I had five instances where I felt it would fall, but surprising I have never fallen down while riding the bike. Even I have applied brakes at 115kmph and it stopped within few seconds. 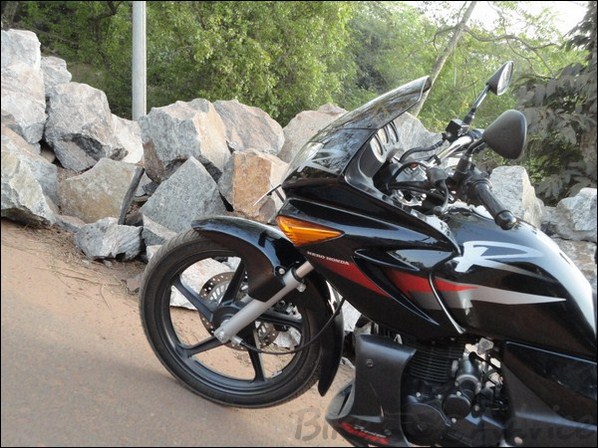 I felt the big bike feeling after riding Karizma R. Though it a 150kg machine, the weight never felt at the time riding.The riding posture is such it gives confidence on the road. I always cherish the riding pleasure of Karizma.I feel proud while riding it. 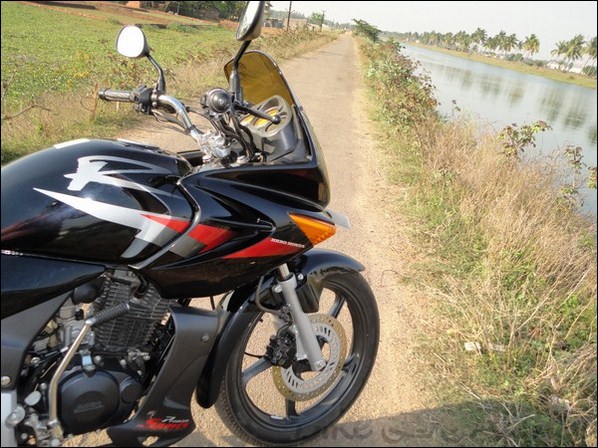 Karizma handles well in any type of road condition (bumpy, dusty and wet).Though the long wheel base requires more turning radius, the cornering is quite well. The handling is equally good at higher speeds.

The MRF Zappers (the best) gives the bike very good grip on roads. Though wide tyres can be fitted in Karizma , it will affect the fuel efficiency and handling. 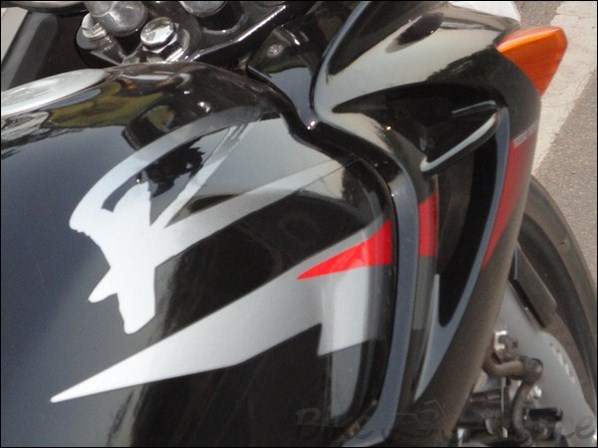 My Karizma gives 40kmpl in main and 30kmpl in reserve. The mileage varies on riding style and speed. Overall I get 38kmpl. It not fair to expect much from a 223cc performance bike.

Karizma R is a perfect blend of performance, styling, comfort and reliability. It is a versatile bike that can be a very good commuter, a good racer and the best tourer. 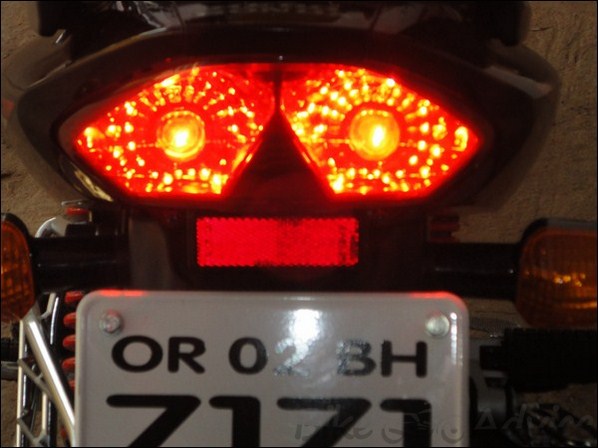 Though it lacks rear disk brake and tubeless tyres, it is a highly reliable bike with unstressed bullet proof engine, very good suspension and gentle but eye catching looks. For me Karizma is

P.S. More photos of this bike are available in high resolution @ Facebook Album