Japan has seen something terrible over last couple of days. The country was hit by earthquake followed by a Tsunami which paved way to mass destruction. Japan’s economic conditions are also not very well at this moment and this seems to get worse and worse. Experts are of the opinion that Japan may soon fall prey to recession. To add to the frustration of Japanese government, several nuclear blasts even triggered off leading to a subtle fear of nuclear reaction. So all in all the future of Japan is in doll drums at this moment and thus every other financial body is slowly and steadily trying to evacuate or shut their operations for some time. 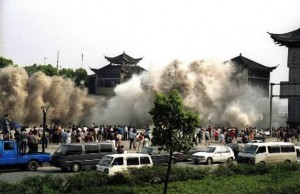 This condition of Japan has even trapped the motorcycle manufacturers. These natural disasters seem to have affected the top 4 Japanese motorcycle manufacturers viz. Honda, Kawasaki, Suzuki and Yamaha. News has it that, Honda’s automotive factory suffered major damage and the Tochigi factory facilities along with several other facilities will be shut down for sometime now. In addition, Kumamoto facility where the CBR600, VFR1200F, DN-01 and Super Cub are built shall also remain shut down for sometime till the things get into control.

Kawasaki Heavy Industry’s Akashi factory is located 400 miles southwest of the primary disaster area. As a result the factory did not suffer any loss due to the earthquake. Kawasaki did not suffer any losses expect some minute losses. Suzuki has also stopped production at it six plants due to some inherent damages suffered by the company. As far as Yamaha is concerned, news has it that they have avoided major damages but will not resume their production at least until March 23.

Not only the motorcycle industry but also the car manufacturers have suffered due to these violent attacks of Mother Nature. Car manufacturers like Toyota witnessed loss of tens thousand of vehicles and revenue because most automotive companies must run at an average of 61 days of inventory supply. News sources say that there should not be much a problem in United States because most of the dealers are equipped enough to withstand short term production cutback. Motorcycle segment seems to be most effected due to sales drops, production cuts and broken supply chains. Also the MotoGP race at Twin Ring Motegi has been postponed, and Tokyo Motorcycle Show has also been canceled.

Honda has donated 1,000 generators to aid with rolling blackouts and offered 300 million yen (around $3.8 million) towards relief and recovery. Overall the condition of Japanese motorcycle market is not favorable at least at this moment of time. At last we wish to acknowledge Honda for their support to Japan in these times of difficulty. We at BikeAdvice pray for Japan’s faster recovery.