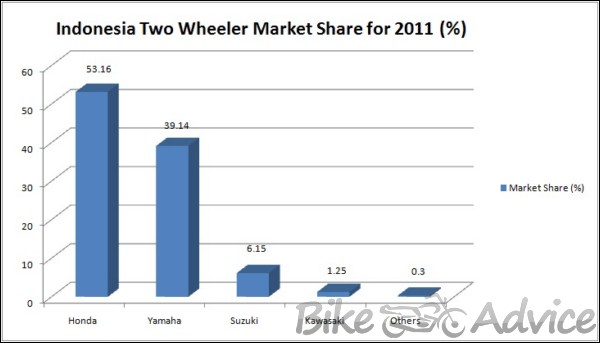 According to AISI the January-November month reported sales of 7.58 million units which were on track as per AISI estimates. However, sales in December month were affected due to the flood situation in Thailand. The sales of December month was stood at 463,431 units down by 28% compared to earlier year. AISI expects double digit growth of 10% with total sales of 9 million units for the year 2012.

According to AISI chairman Gunadi Sindhuwinata, “We exchange a large number of components with Thailand, so the floods really affected local producers, especially in the last months of the year. We still predict that our domestic motorcycle sales can still grow more than 10 percent to 9 million units. Sales in Jakarta and its surrounds will be generated from customers getting new motorcycles to replace their old ones. Sales growth will rely heavily in areas outside Java and people with better income enabled by hikes in commodity prices will drive the demand.”