Motocross races are a wholly different world compared with the traditional racing which happens in a race track usually. They are even considered to be tougher than track races as it needs an entirely diverse preparation in terms of the rider’s physical presence and mental ability to compete in this category. 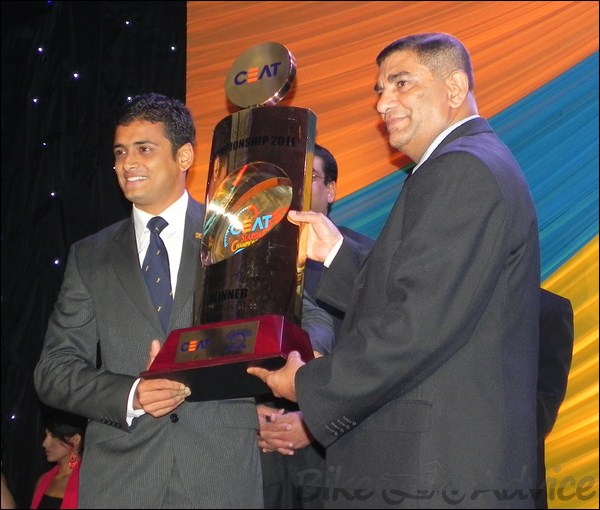 If there is one name in India that is synonymous with domination of Motocross championships, it has to be the TVS Racing Team. With their exclusively trained Motocross racers, they are sure to dominate every single race in this category. It’s been a history so far and their reign here still continues – Unbeatable competitors.

The Desi racing team has now hot a reason to rejoice with yet another feather in their cap. Aravind K P of Team TVS Racing has now becmme the first Indian rider to win a motocross championship outside India. He recently won this year’s Sri Lanka Association of Racing Drivers and Riders (SLARDAR) Championship 2011. Aravind K P dominated the race and was titled the Championship winner. He finished the race with a total of 73 points. He, along with TVS Racing, Advisor Racing – R&D, Mr. Arvind Pangaonkar was felicitated at a glittering ceremony held recently.

“It was a tremendous experience riding in Sri Lanka. I have learnt a lot during this event as it was a great platform for me to fine tune my riding skills. I have emerged as a much better rider after this event. I am overjoyed to have finished on top of the Sri Lanka Association of Racing Drivers and Riders (SLARDAR) championship 2011”, Aravind said on receiving the championship trophy.

Aravind competed with 21 racers in Sri Lanka including his teammates Santosh CS, HK Pradeep and 2010 UAM Asian champion from Japan Tomoya Suzuki for the title. As a title winner of the championship, he also won himself a fully paid trip to watch the Dakar rally which will commence in the later part of this year.

Mr. Pangaonkar was in all praise for the SLARDAR Championship stating that it was one among the best conducted events that he has witnessed so far. He appreciated the fantastic tracks that brought out the best in both the rider and their machines. On this occasion he said, “Such tracks compel the rider to push the limit and force him to excel. It coerces him to raise the bar in order to win.”