DSK Motorwheels, owners of the Hyosung brand in India now have launched the upgraded version of the GT650R, a sports motorcycle which was first launched when Hyosung was owned by Garware Motors. The company also brought out a brand new cruiser motorcycle, the GV650 Aquila, which is a cruiser motorcycle. The eye-catcher of the show is course the cruiser! Currently, you have to admit that there are very few middle-weight cruiser motorcycles on the Indian roads. Thus, the very small number that are there get a lot of street presence and, luckily with the ST7 earlier has been an elite member of this squad. Now, with the launch of the GV650, they have upped the game and hoping to increase their street presence too. 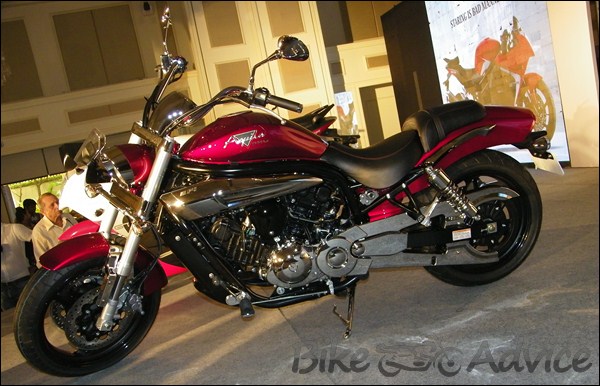 This launch also marks the end of almost a decade of the Aquila moniker from the Indian motorcycle market. The GV650 Aquila, like the GT650R is powered by the same 647cc, DOHC, water-cooled 90 degree V-twin engine that produces 75 PS of power at 9000 RPM and a healthy 62.5 NM of torque at 7500 RPM. This engine is mated to a 5 speed gearbox and power is sent to the rear wheels via a belt drive.

On the event of the launch, Mr. Shirish Kulkarni, Managing Director, DSK Hyosung said, “We are very passionate about promoting superbiking culture in India by introducing niche products for our valuable customers and superbiking fraternity as a whole. Aquila Pro as our campaign says ‘soul of a cruiser, heart of a racer’ is one of the best looking cruisers I have ever seen. It is basically about fun and the sheer joy of riding. When it comes to the newly launched GT650R – 2013 its sheer racing style is going to the win the hearts of lovers of super sports bike in India”.

The GV650 Aquila has been built around a tubular steel cradle chassis and gets a huge lot of chrome treatment, just like the ST7. At the front, it gets upside down forks while at the rear it gets a swingarm. Front braking power is provided by dual 300mm discs while a single 230mm disc does duty at the rear. The motorcycle rides on 120/70 18inch tires at the front and 180/70 18 inch tires at the rear. Hyosung claims the Aquila will hit a top speed of 195 kmph! The instrument cluster is dominated by the digital speedometer and an absence of a tachometer. Also present in the console is an engine temperature gauge, a fuel gauge, a clock, and a choice of two trip meters and an odometer. 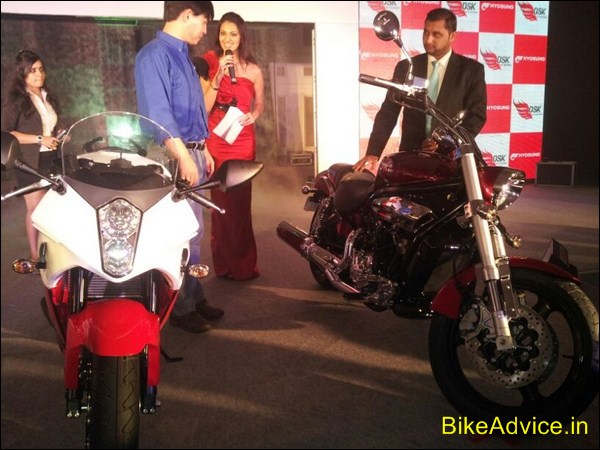 On the other hand, the sports bike GT65R gets some minor cosmetic changes. The motorcycle gets a new two-tone paint job of red and white. Styling at the front, rear and side remains more or less the same. There have been no upgrades to the mechanicals too. 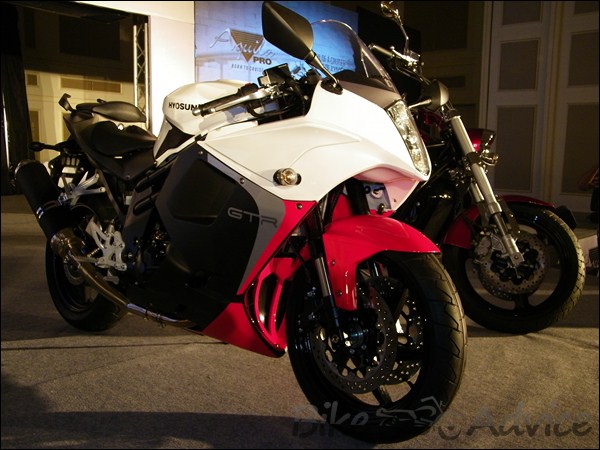 However, Hyosung says that the engine has been tweaked to provide better and smoother power delivery. The GT650R will also be available in 3 colour variants- Titanium White, Titanium Red and Titanium Black. The GT650R has been priced at Rs. 4.79 lakhs (ex-showroom, Delhi).