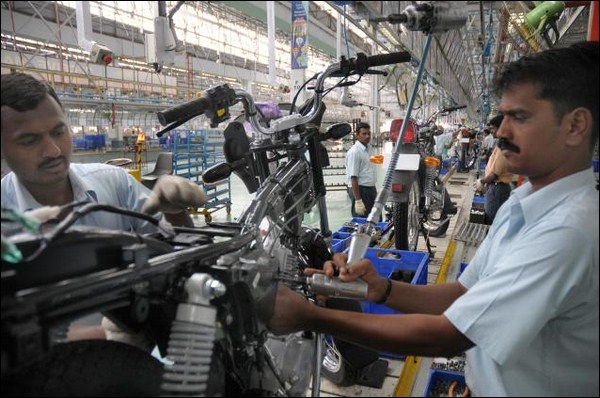 As most of the regular readers of the blog will be knowing by now, there is a high level of number game presently going on in the Indian two–wheeler market. Every single player is eyeing the Numero Uno position to get their recognition worked out in the right manner in the Indian market. Also, India being the second largest two–wheeler market, next only to China, these companies considers the sub – continent to be the right place to be in the future.

Fuel Efficient Motorcycles is the Future:

It becomes mandatory for the companies to keep devising new strategies in order to be a player in the game that India is currently seeing. As part of this strategy, HMSI (Honda Motorcycles and Scooter India) and the TVS Motors (which is on limelight since its trade pact with BMW) have decided to concentrate on improvising the Fuel–Efficiency of its forthcoming models. With skyrocketing fuel prices, Fuel–Efficiency has become a major criterion for customers when it comes to their bike buying decision. Also, the fact that the fuel prices are tend to see only a northward trend in the near future is yet another area of concern.

Honda Motor Company’s global President & CEO, Mr Takanobu Ito, had said, “Today, key competitors in those (emerging) markets are Chinese and Indian makers. In order for Honda to remain a market leader, it must not only maintain the high attractiveness and quality of products but also further improve cost-competitiveness to match the low prices of these competitors.”

In order for Honda to take on Hero MotoCorp, the company is forced to take the market share considerably form the HMC’s mass bikes – Splendor and Passion. The reason for their success in mainly attributed to their Fuel–Efficient engines. If Honda has to concentrate on mass segment entry–level bikes, then it has to come up with new engines which should be at par with that of Splendor’s and Passion’s in terms of performance and of course, Fuel–Efficiency.

“Top quality and performance will be our priorities and we will consistently focus on higher capacity along with (higher) mileage. Our challenge is to reduce running expenses for motorcycle riders in the mass segment,” said Mr Keita Muramatsu, President  & CEO of HMSI.

He then added, “This will become a reality once Honda R&D becomes part of the Manesar facility from October. Technology will become the driving force for us along with the challenge of keeping costs in check.”

HMSI has already made it a point that Indian market will be contributing to 30 per cent of its total volumes by the year 2020, which is just a few years ahead. The current share is a little more than 13 per cent.  This figure clearly reveals the importance of Indian market for this Japanese giant.  The company is also facing stiff competition against few of the Chinese manufacturers in terms of operational cost that is involved with manufacturing.

The company is also eyeing the possibilities of sourcing components from India for its operations in the ASEAN region and for its Japanese manufacturing facilities too. All these moves are taken as part of stringent cost–cutting measures.

“India can play a bigger global role in the future for Honda but, for now, the domestic market is important,” Mr Muramatsu said. HMSI is also trying to develop another brand like Activa which speaks pages and pages for the company.

“Our direction is going down right from the 150cc and down to 125cc and finally to 100cc, even while the market has been upgrading. Creating additional value for the customer is, therefore, a priority for Honda,” Mr Muramatsu said.

On the other side, we also have TVS Motors coming up with new technologies that would be incorporated in the engines to follow, which will aid in pumping up the fuel efficiency of its products.

TVS Motors is working on developing engine and transmission efficiencies and a few other energy conservation related technologies that would ultimately end up in improving the Fuel Efficiencies by another 20 per cent. A current model delivering 40 kmpl would manage to deliver close to 48 kmpl with these technologies adapted.

The engines with these technologies would begin its test running by late this year and would be production ready by next year.

Business Line has quoted: Mr Vinay Harne, President – NPD (New Product Development), TVS, said: “With these technologies, we have hit the right mix of fuel economy, energy efficiency and high power for normal and hybrid vehicles.” Also, the company has incorporated hybrid technologies that will enable a two-wheeler to switch between petrol/diesel and electric power, powered by its intelligent controllers, according to TVS officials.

A few company sources also claim that these technologies would be brought in not only to the bikes but also for its scooter range so as to minimize the various losses and distortions that these vehicles tend to face on roads.

Going through all these, one can make a fact very clear. Fuel Efficiency is the trump card for the next few months and all companies would be concentrating on this front till next card comes into the pack.