With the market getting hotter from every nook and corner with some sizzling products in offering, it is important that we move ahead in the technology department as well and not just a permutation and combination of the same old tech implementations on different versions. In the same bid, Honda launched a scintillating looking Fuel Injected version of Stunner a few months back which was unveiled at a grand function where two bigwigs also made to the curtains, the naked monster CB1000R and the super sexy streetfighter CBR1000RR 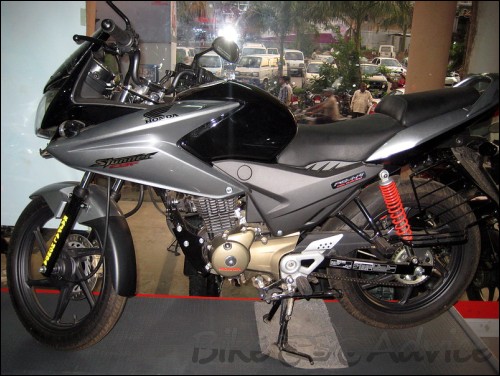 With the presence of such massively accorded bikes many would feel a small 125cc bike would get overshadowed, but contrary to this perceived notion, it held onto its own with a distinct appeal and a glorious aura. Lets dig out what difference had a Fuel Injector made to the overall behavior of the bike from its elder sibling.

STYLING, BUILD AND DESIGN: I am yet to come across a sane man who doesn’t like the looks of the carbed Stunner and then what better when it comes in different and more appealing clothes. Essentially, Stunner PGM-Fi remains the same old body with changes in the overall designing and colors. The linearity of the whole bike is maintained with lines flowing in a particular well defined manner. Even the contours are pretty well sorted out. The uniformity of the design, right from the fiery front fairing all the way uptill an upswept tail surely reflects the detailed eye which went into the making of the bike.

The bike comes in two tone paint scheme borrowed from the liter class sibling CBR Fireblade and needless to say they look simply superb. The front fairing is indeed the best looking perfect fit on any semi faired bike in India and doenst look an odd fitting as is the case with some of the bikes in the market. Honda has decided to deploy two color tones of the CBR series, the CBR Red and CBR Silver Metallic on this 125 cc machine and the bike certainly oozes out style in both of these color tones especially the metallic red complements the overall theme pretty well. 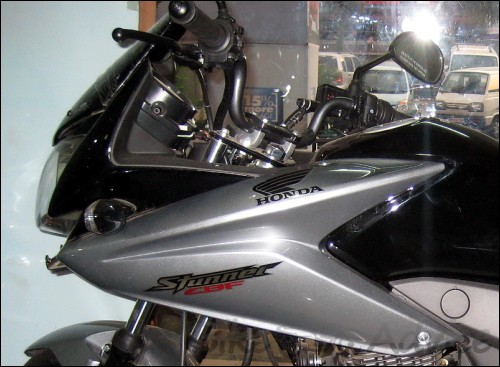 The rear shock absorbers are also painted red which, incidentally, look good. Seating posture is sporty with those rear set footpegs but even after continuous long runs the bike feels relatively comfortable. The seating is split type and broad enough to accommodate even fatter butts comfortably. Handle bars are the same high placed ones as the older stunner which also aids to the comfortable seating posture.

The engine gets a golden treatment which lets the bike exude a lot of class. The bike now sports a half chain cover to add to the sporty feel along with a premium key and a maintenance free battery. Build quality is top notch with very little to complain about. Paint quality is one of the best we have seen on Indian bikes and the fit and finish is just awesome. As a design element, the bike also gets a silver finish heat shield instead of the chrome plated one on the carbed Stunner. Overall, we would class this bike as one of the best looking bikes in the country.

RIDE & HANDLING: The bike runs on the same Diamond frame as the earlier Stunner. The overall chassis and suspension setup remains the same which means that this bike also handles like a dream and cornering is a cake walk on this fantastic setup. On the contrary, ride quality of the bike is not as plush as some others in this engine segment (read Yamaha Gladiator) but still is pretty decent. What we would like Bajaj to learn from Honda is how they design their knee recesses. On the Pulsar 220, driver’s knees have a hard time with that semi fairing, as it touches them causing a displeasing irk especially on long runs for people who are a little long on scale. On the contrary, Stunners knee recess has been so well sculpted that it can accommodate any normal to large knees with absolute perfection. 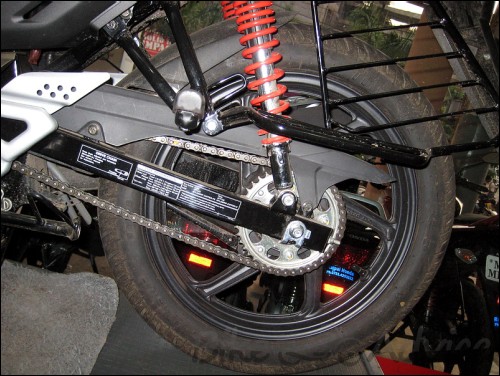 Zipping through the traffic on this bike is not as easy as (say) its other sibling, Honda Shine, but manages pretty well but the best on any half or full faired bike in India. The worse part we found was that some bikes had TVS Tyres. We really don’t understand why, even after taking such a premium, Honda doesn’t provide them with MRF Zappers, or better still soft compound tyres. This is the only deterrent to a knee scratching cornering abilities of this bike. Just that TVS tyres do not feel as attached to the road as some good quality tyres.

As has been the major complaint with earlier Stunners (and Shines), the vibrations, which creep in at mid and higher rpms, have been taken care by Honda. The bike now sports end handle bars to reduce those saddening vibes. Second, the bike has taller gearing which means that the bike runs at lower revs in turn helping in reducing the vibs. Compared head-on with the earlier Stunner, the vibrations are still there but a lot lesser and don’t come between the fun factor which this bike returns.

PERFORMANCE, BRAKING & FUEL EFFICIENCY: With an increase in power by almost half a bhp from its earlier sibling, the bike is expected to be faster. Let us, at first, inform you that there is not a very noticeable difference between the two bikes. The FI surely has a better and crispier throttle response majorly attributed to the inclusion of a Fuel Injector. Essentially, both the bikes are near about similar on figures with this FI being less than half a second faster to 60 kmph clock ticking a tad over 6.5 seconds. When we checked out the top speed of the bike, speedo showed us 105 kmph after which the bike was totally dead. Compare this with the 102 kmph we managed for the carbed stunner. But the way this bike reaches that top speed is way better than the carbed one.

The carbed Stunner runs out of steam at anything over 85 kmph and after that it’s just your time and extra road which carries it over a ton. The marginal better top speed is majorly because of the fact that Honda has shed one tooth of its rear sprocket which means that the bike is now taller geared than carbed version. We wonder how would the carbed stunner behave with the same sprocket (Hope you understand what we mean!). However, the mid and top range of both the bikes did not leave us impressed very much, just that the FI is little bettered. Talk about low end and we would rate both of these as the best in this 125cc segment. 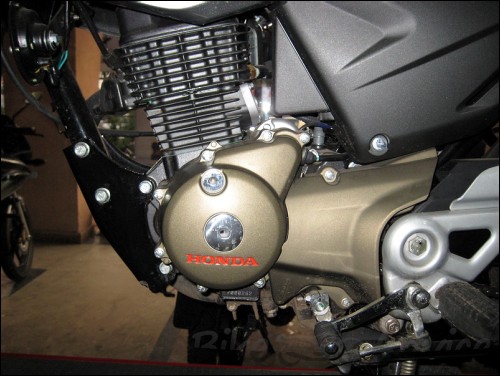 Many of you might be wondering about the addition of the much famed PGM-Fi on this bike and how has it improved this one and here we talk about the fuel efficiency figures of the bike! There is a definite improvement of at least 5 kmpl over the carbed version. Expect this bike to return very good fuel efficiency figures of 65-70 kmpl under normal city riding and anything in excess of 70 on long highways. This bike runs on the same braking set up as the earlier version and overall braking is very good and the braking certainly instills a lot of confidence just that the TVS tyres are little let down (we repeat, Honda please provide this bike with soft compound tyres only).

TIDBITS: The best thing Honda has done is to remove that oddly placed choke knob. Switchgear is almost identical and doesn’t have an engine kill switch (still!). Neither does the bike sport a tachometer, which we feel is a must these days especially when you are selling your product as a premium in the market. The bike has a bank angle sensor, which shuts off the fuel supply once you roll over a particular dangerous angle just to avoid any internal engine damage. Instrumentation is also similar with the FI getting a malfunction indicator just beside the neutral light on the console. 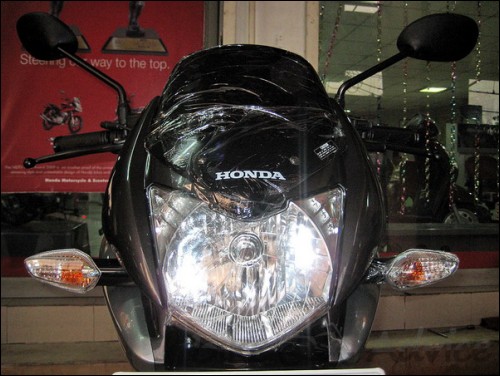 VERDICT: If you have read the full review and have any plans of considering this as a prospect bike, let us shatter them! The bike retails at a monstrous (and unjustified) price tag of Rs 73,000 which is over 16k than the carbed Stunner and way over any other 125cc bike. With positive changes to the designing and paint theme, an addition of FI we would have loved this bike to be priced sensibly but Honda seems to be a little over optimistic about their bike.

Very little performance gain, nothing out of the ordinary gizmos (like the Yamaha R15 has), this bike is not recommended unless you are a Honda showroom owner! Probably a 5k increase would have made this bike a worthy upgrade or a Unicorn engine would have made this bike a roll on success at this price but sadly, Honda seems to be in a tune of their own. If you have as many rupees and are bent on buying an FI bike (only), buy the Apache RTR 160 Fi!